The five-party HyStOH consortium (in English it stands for hydrodynamic structural optimising of an offshore turbine floater) has followed the latest trends in floating offshore wind turbine (FOWT) design philosophy.

The aim of these and other modular design and standardising methodologies is a major reduction in fabrication costs.

A wider objective is to drive down floating wind’s levelised cost of energy (LCOE) to bring it into par with state-of-the-art fixed-bottom technology.

A key feature of the SelfAligner’s integral floater and tower overall design is the application of shipbuilding principles through standardised modular steel structures.

This means using flat and bent steel sheeting as base elements, supplemented by T- and P-shaped "weld-on" stiffeners.

Combining these in box-shape and other structural sub-assemblies enables an optimised use of material by creating strong and rigid lightweight structures, while offering a high degree of production automation and robotised welding.

He came up with the SelfAligner’s floating concept and acts as the consortium’s coordinator.

One consortium partner is structural-engineering consultancy JBO, also based in Hamburg, which focuses on substructure wind loading and structural design optimising.

Another partner, the Hamburg University of Technology (TUHH), developed a simulation method called Panmare at the Institute for Fluid Dynamics and Ship Theory, which is applied within the consortium’s project to simulate loading on the turbine and floater.

Being able to accurately predict the motion behaviour capability for a self-aligning floating wind turbine proved crucial for the platform design and development because multiple impacts must be considered.

The ability to right itself depends on the sea conditions and current-related forces, as well as the aerodynamic loads induced by the turbine rotor and tower.

Also, tensional forces from the anchor line that keeps the system in position contribute significantly to the forces acting on the floating structure.

The project started in 2016, funded by the German energy ministry, with utility E.on on the advisory board, and will be finalised next year.

Cruse’s overall concept ideas identified a semi-submersible floater structure as a preference to allow simplified assembly, installation and ballasting, together with a self-adjusting downwind turbine, eliminating the turbine yaw system.

Cruse teamed up with the fourth partner, aerodyn engineering, which contributed the main specifications and know-how gained from its two-bladed 6MW SCDnezzy concept.

The main characteristics of the super compact drive (SCD) technology are a medium-speed geared drivetrain incorporated in a highly compact layout, even with the nacelle cover eliminated.

Steel was chosen as it is a friendly material to bending forces, thus building in sufficient structural flexibility to reduce material fatigue and ensure a long service life, Cruse adds.

Proven marine coatings for steel also provide excellent resistance to corrosion. The floater could in future be fitted with either a faster-turning two-bladed rotor, which is noisier but weighs less, or a three-bladed downwind rotor, depending on the client’s preference.

The consortium’s floater/tower development effort initially focused on a three-legged structure, in line with several other semi-submersible concepts, such as Principle Power’s WindFloat and Henrik Stiesdal’s lightweight TetraSpar with a retractable keel.

These structures come with either a central tower and turbine mounting or an off-centre turbine mounted atop one of the buoyancy elements.

"The four-legged floater outcome for our reference turbine with a 140-metre rotor diameter is 80 metres long [from the buoyancy column facing the approaching wind to the aft element with vertically mounted tower] with a minimised water surface plane.

"This contributes significantly to stable operating behaviour with minimal inclinations and modest wave- and wind-induced accelerations."

The stable operating behaviour, according to Haake and Cruse, is also enabled by using a passive ballasting system, which is far less complex than the active-ballasting systems used by some competitors.

This adds up to 5,000 tonnes of water in total, with the filling level of the front buoyancy column higher than the aft element to compensate for the overhanging rotor mass. 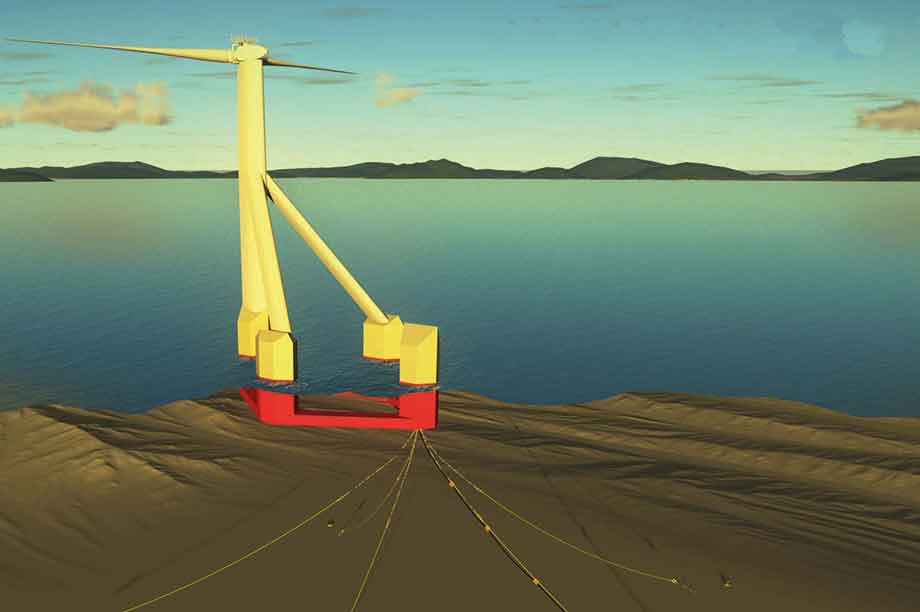 "The two steel struts stretching from the tower to the left- and right intermediate buoyancy columns transfer part of the wind load from the tower into the floater," explains Haake.

"Both the tower and struts were designed according to shipbuilding principles, and the tower connection point is optimised to minimise wind-induced tower bending moments.

"The aerofoil-shaped tower and tower support struts both consist of a structural box girder with internal stiffeners of different sizes, plus non-structural lead-edge and trailing-edge add-ons.

"The aerodynamic shape of the mast and struts is a big advantage for a rotor turning downwind."

This is because load cycles for wind turbines are very high, requiring detailed insight into fatigue-related issues.

Every detail of the structure, including welding seams, therefore need to be thoroughly analysed for material-stress concentration.

"One of those hot spots was found at the tower-struts connection area, and another at the point where individual struts link to the buoyancy column," says Haake.

"Adding a bracket in a hot spot can be instrumental in bringing down a stress level considerably."

Cruse believes this is the right time for the consortium to go public with its work, as all SelfAligner fluid dynamic modelling, plus wave-basin and wind-turnnel testing have been completed and validated.

He thinks the partners’ approach of combining experiences from different technical disciplines has led to an optimised, cost-effective overall solution.

This is supported by the relatively lightweight 2,100-tonne total structure mass for the floater plus integrated tower, for a specific mass of 350t/MW for a 6MW turbine.

This compares favourably to the latest quoted competitor values for 5-8MW steel semi-sub floaters, typically in the 350-400t/MW range, but excluding the tower.

"Our next step will be a full-scale 6MW prototype, but we will continue with our ongoing FLS analysis of the entire floating structure," says Cruse.

"This is an essential part of our technology validation because turbine load cycles are very high, and we want to assure that our project’s future lifetime expectations will be fully met."

Central rotatable anchor point — All around a Turret buoy

With HyStOH (and SCDnezzy), the entire floating structure aligns itself to the prevailing wind direction by rotating around a central anchor point or turret buoy.

"We decided to use five mooring lines, although three would be enough to absorb combined wind and wave loading.

"The extra lines provide redundancy in case a single cable or chain snaps, which is a validated solution approved by international merchant shipping certification bodies."

The integrated slip-ring unit is a state-of-the-art commercially available solution for cost-effective and reliable power transfer from a rotatable generating system to a semi-stationary marine power transport export cable.