The Global Climate Action Summit was a world-class gathering that took place in San Francisco in September.

In this self-selected and somewhat clubby global group, all seemed to have this in common: they believe that time is running out to halt the chaos and destruction of climate change.

An exclusive and high-octane summit — radical environmental protesters choked the streets outside — it was convened by California governor Jerry Brown, who leaves office in January because of term limits.

Brown is rightly fast becoming an elder statesman of climate change, along with former vice-president Al Gore, who also attended.

The idea was also to bring together non-national players — including state and local leaders — to catalyse change and provide an update before government representatives meet in Warsaw in December to finalise implementation guidelines for the Paris Agreement.

"If a researcher does an experiment, and you find out they’ve got a medicine that works, it spreads," said Brown on the eve of the summit.

But the content was at times more aspirational than practical, although the idea was to spark change and encourage action at the midpoint between the signing of Paris in 2015 — designed to hold global temperature rise to 2oC — and 2020, when countries are to strengthen their commitments.

Renewable energy was not much of a central issue in the speeches.

Some of the speakers were guardedly optimistic, although insiders would have been well aware of the content of an unnerving new report that was to be published three weeks later by the United Nations’ Intergovernmental Panel on Climate Change (IPCC).

The much-covered report concluded that the national pledges to slash greenhouse gases (GHG), announced in Paris, would not be sufficient to prevent global temperatures from rising too far.

The tone of the summit was set on the first morning: more action is needed, but success is possible. "The scientific message is clear; things are changing faster than we had ever predicted," warned Johan Rockström, professor of environmental sciences at Sweden’s Stockholm Resilience Centre, in the opening session.

"We are at the tipping point, at the edge, where we need to find transformation. We need to bend the curve of emissions by 2020 and reach a fossil-fuel-free world economy by 2050," he said.

The world has only a 66% chance of temperature change staying under 2oC, said Rockström, and needs an exponential path of change.

But the good news is that by 2020, according to empirical evidence, 53 countries will have peaked their GHG emissions. He summed up his outlook as "nervous and hopeful".

Next up was Christiana Figueres, former head of the UN Framework Convention on Climate Change. She talked of Mission 2020, which she now heads, a move to use "radical collaboration and stubborn optimism" to bend the curve of global GHG emissions by 2020.

There were notably few conservatives at the event, and an anti-Donald Trump tone was pervasive.

As Brian Deese, head of sustainable investing at global asset manager BlackRock, who as an aide to former president Barack Obama was a key adviser on the Paris Agreement, noted: "It took the Trump administration to bring a unifying force to the private sector. It’s an equal and opposite reaction," he told delegates.

BlackRock has invested widely in wind and solar assets.

Indeed the summit’s focus on lower-level governments was appropriate, especially given the politics of the US, where states and cities are leading the charge to combat climate change.

Meanwhile, the US congress is now likely entering two years of gridlock until the next presidential vote in 2020 after the Democrats won the majority of seats in the recent midterm election.

Trump is, of course, a climate-change denier who seeks to pull the US out of the Paris Agreement. He has dismantled Obama’s Clean Power Plan, although that had already been put on hold by the Supreme Court.

Co-chair of the summit, Michael Bloomberg, a leading Democrat and former mayor of New York, noted how much action is occurring in the US’s cities, states and the private sector.

"Decisions are not being made by the federal government. Washington is not in charge of America’s energy production," he said. "Washington can’t stop the decline of coal."

In attendance were numerous mayors, governors, ministers and presidents of small nations from Paris to Fiji and China.

Catherine McKenna, Canada’s minister of environment and climate change, was there, as was China’s climate change envoy, Xie Zhenhua, along with a good scattering of business leaders ranging from Starbucks president Kevin Johnson to Mark Benioff, founder of cloud-computing firm Salesforce, to Ikea CEO Jesper Brodin. 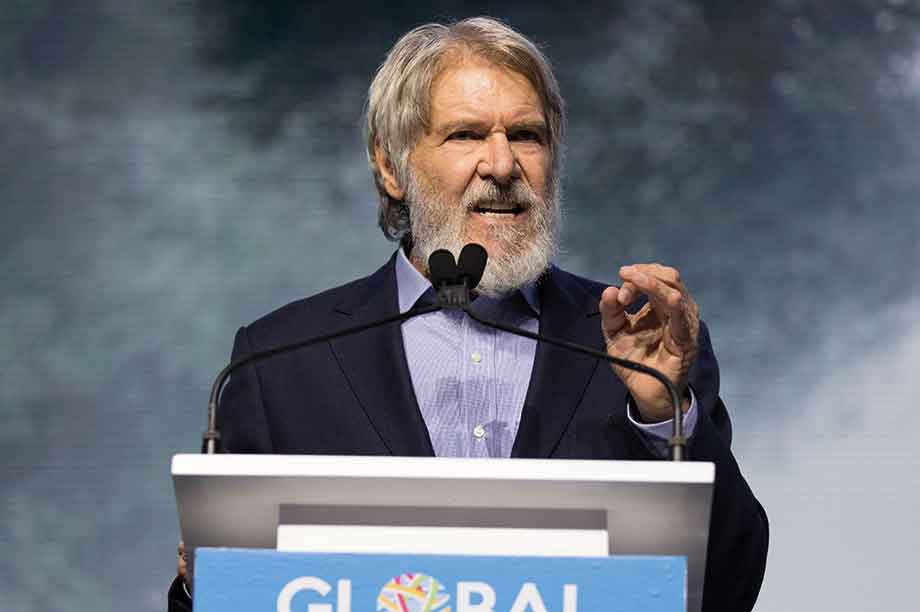 Actor Alec Baldwin, famous for his unflattering impersonations of Trump, attended the event, as did billionaire environmental activist Tom Steyer.

At a press conference before the first sessions, Brown and Bloomberg released a report showing that in the US, non-federal climate action will cut economy-wide emissions 17% below 2005 levels by 2025, about two thirds of the way to the US target under the Paris Agreement.

In other announcements, 26 cities — from Medellin in Columbia and Birmingham in the UK, to Tokyo and Oslo — committed to procure only zero-emission buses and ensure that a major area of their city is zero emission by 2030.

How their progress will be tracked remained unclear, however.

Also unveiled was the Step-Up declaration, with 21 major companies announcing an alliance to harness the power of emerging technologies and the "fourth industrial revolution" to help reduce GHG emissions and ensure a climate turning point by 2020.

And on the final day of the conference, the philanthropic community — including the IKEA and Turner Foundations — announced a $4-billion commitment over five years to combat climate change, the largest-ever such investment in climate mitigation.

You’d think that renewable energy would have been a more major part of the conference.

After all, on the homepage of the summit website, the background is one of five wind turbines turning against a cloudy sky above subheadings such as "healthy energy systems" and "transformative climate investments".

This was even more surprising considering Brown’s role in the summit.

Just two days before the event, the governor, who oversaw government incentives for the early days of the global utility-scale wind industry in the 1980s — for which California was the crucible — had signed into law a landmark bill requiring 100% carbon-free electricity by 2045 in his state, the world’s fifth-largest economy.

A comment from Rockström, of the Stockholm Resilience Centre, in the opening session, was illuminating.

He described renewable energy as a "boutique opportunity" ten years ago, perhaps a sign that even a leading climate change expert from Sweden has been out of date with the sector’s progress.

There were, of course, other mentions of renewables. Perhaps the most quotable came from Aparne Bole, a leading paediatrician in Cleveland, Ohio.

He described offshore wind as the "anchor" in New Jersey’s plan to combat climate change. The state has the most aggressive target for offshore wind in the US.

Stient Je Van Veldhoven, the Dutch environment minister, referred to offshore wind farms in the North Sea; and Sylvester Turner, the mayor of Houston, the world’s energy capital and host of next year’s American Wind Energy Association annual conference, noted that 80% of the city’s electricity is generated by wind.

"Invest in renewable energy, but also work to prevent the destruction of these ecosystems," he urged.

In a clear message to his home country, he called for the election of leaders who believe in science. "Stop, for God’s sake, the denigration of science."

But still, hard science on renewable energy was not much in evidence at the summit, which was perhaps fair enough for an aspirational affair designed to rally the troops.

It might have been a clue that unlike the New York Times, the Wall Street Journal, Reuters, Bloomberg and even some small local publications, Windpower Monthly did not have a seat reserved in the press area in the general sessions despite having registered.