The introduction of auction systems in many wind markets, together with increased competition from other renewables, especially photovoltaics, places enormous pressure on the wind industry to further drive down the levelised cost of energy (LCOE).

The challenge for the OEMs is reducing both turbine Capex and lifecycle-based Opex, while boosting the lifecycle energy production of existing and new products at the same time.

These products fit into an ongoing trend towards higher torque densities — expressed in Nm/kg — a strategy aimed at driving down gearbox unit mass, cost and, ultimately, turbine LCOE.

The Shift 6k (pictured, below) offers a 5,500-7,000kNm mechanical (input) torque range, which enables rotor diameters of up to 180 metres, according to the company.

The up-to-1:200 maximum gearbox step-up ratio feature could, for instance, allow an onshore rotor with a rated speed of 7.5-8.0 revolutions per minute (rpm) and a four-pole generator operating at a nominal speed of 1,500-1,600rpm. 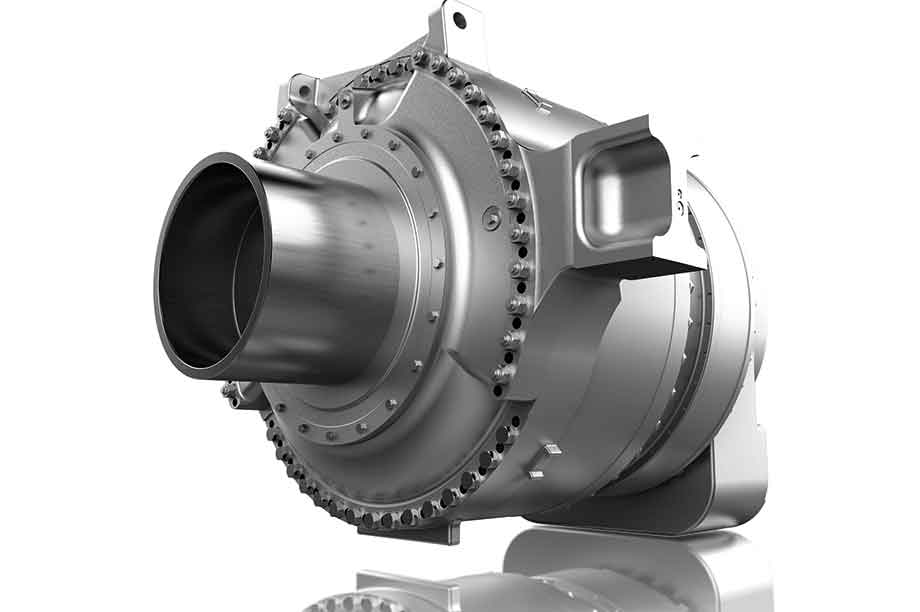 The mass reduction that has been made possible by this overall technological progress during the past four to five years is equally striking.

The first-generation Shift 2k (2,100-3,000kNm), plus the upgraded second-generation Shift 4k (3,500-5,300kNm) and the new Shift 6k together cover a broad range of turbine configurations in all wind classes.

Another example of upgrading and optimising is MHI Vestas’ V164 offshore platform, which started life as a 7MW model and has just reached the 10MW milestone with the V164-10MW unveiled at the Hamburg show.

Input torque, during the various incremental steps, from 7MW to 8MW, then 9.5MW and now 10MW, increased by 43% in total, but without impacting drivetrain dimensions and mass.

To achieve the 150-175Nm/kg maximum range we have seen this year, journal bearings have become an essential precondition.

All main players also predict that their latest and highest torque densities are not the end stage. There is more to come.

The resulting higher total step-up ratio could allow a super-size rotor and four-pole generator, instead of a common six-pole version running a third slower.

Here the LCOE trade-off is between the extra cost from adding one extra gear-stage set to the gearbox, and the cost savings achieved through applying a cheaper, faster-running generator.

Many of the major OEMs at the show this year seemed keen to focus on anything other than their turbines.

Of course, they were still showing their wares, but the key messages from their stands were demonstrations of their diversity.

Gone are the days of a simple turbine supplier that manufactures and delivers its product.

All OEMs now have extra services or tools to boost production and cost competitiveness in order to combat the falling revenues seen across the board.

Lagerwey provided a good example by installing its innovative climbing crane on a turbine tower base outside the main entrance of the conference centre. 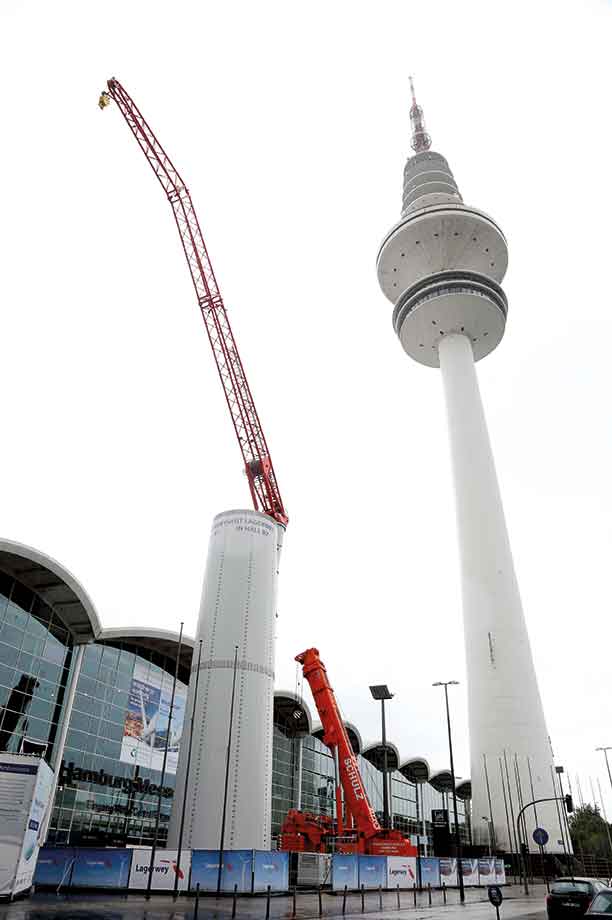 Elsewhere, Vestas was looking at how it can aid hybrid projects.

GE Renewable Energy had its digital turbine clone, spoke about its pumped-hydro project in Germany, and unveiled a new modular blade for its Cypress onshore platform, designed and manufactured by its LM Wind Power subsidiary.

Growth and diversification of capabilities is happening right across the energy industry.

The oil and gas majors are also trying to demonstrate their green credentials.

It is now becoming clear that to flourish in today’s market, manufacturers need more than string on their bows.

This does indicate merger and acquisition activity will continue to be a factor in the near future.

More synergies in the industry will, of course, lead to lower costs. But they are also likely to lead to job losses, particularly in Europe.

Diversification is necessary to boost the integration and performance of wind assets. But the industry will only benefit if there is the overall capacity and outlook for wind to develop.

The questions about levels of renewables on the grid are well founded. And the solutions to these questions are being formulated. But where is the desire to match these together?

Who is leading the charge towards electrification and decarbonisation? Everyone is just waiting around with technology and solutions thought impossible less than a decade ago. But it needs real life application to be effective.

Ministers and women conspicuous by absence

Did it matter that not a single federal German minister attended the world’s biggest wind energy exhibition and conference, even though it was on their own doorstep?

And what explained their absence?

With six ministries involved in the Energiewende — the transition from nuclear and fossil fuels to renewables — perhaps the squabbling among the ministers over who should represent the federal government reached such a peak that no one came.

Or they could have been working on their arguments to undermine the proposal by Miguel Arias Cañete, EU commissioner for energy and climate action, on sharpening the EU greenhouse gas reduction target to 45% rather than 40% by 2030.

Meeting Cañete at Hamburg, where he was one of the keynote speakers, might have been tricky.

As it turned out, Cañete set out the road map for "clean energy for all Europeans", demonstrating that the wheels of EU policy turn slowly, but at least they turn.

The pace may be that of a snail, and the path complicated, but national interests at least seem subsumed to the same direction: market-design legislation to allow for a growing share of renewable energy by providing greater flexibility of the power system with appropriate price signals.

We know what is required: support mechanisms that are stable and predictable with no retroactive changes, together with national energy and climate plans so governments can do their homework.

It is a shame that Europe’s immensely hot summer failed to provide the shrill warning of what is to come and trigger a bound forward in pace.

EU cohesion funding towards the clean energy package remains conditional on, among other things, members states not falling below their 2020 renewables targets throughout the relevant period. Hardly ambitious when, in the words of Enercon CEO Hans-Dieter Kettwig, "It’s yes or no for the planet. Now."

It wasn’t only German federal ministers who werein rather short supply in Hamburg.

With a couple of notable exceptions, female speakers and delegates at the conference were about as prominent as female athletes generally are in the sports round-up on mainstream evening TV news.

Watch the slot between the main news and the weather forecast and you could be forgiven for assuming women don’t play sport. 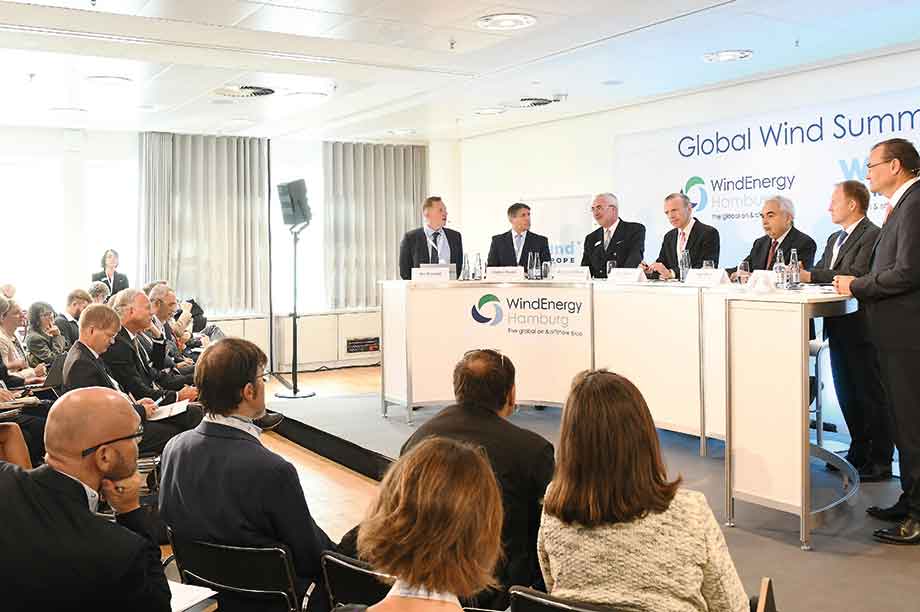 And at Hamburg you could be forgiven for thinking that women don’t do wind energy either.

One CEO (male, of course) remarked that "women engineers are better, but we can’t get to employ them. Perhaps they stay in research?"

Can I humbly suggest an answer to this conundrum? Germany’s wind association is launching a campaign to give a human face to the wind energy sector.

One poster shows a man and boy having a whale of a time working together in a joiner’s workshop, under the slogan, "I build wind turbines and a home with my son."

If you pitch all your messages at the male half of the population, don’t be surprised when the female half assumes your industry has nothing to offer them.

Fuel majors show wind’s players how it is done

Unlike the other contributors here, this reporter was making his first trip to wind power’s main event.

First impressions of a first impression were that you were likely to learn more on the exhibition floor than in the conference halls.

That’s despite the fact that the event lacked much in the way of eye-catching product announcements. MHI Vestas is taking the V164 to 10MW, and GE is stretching its 4.8MW onshore turbine to 5.3MW, and that was about it.

And we have yet to see GE’s 4.8MW model in anything beyond an artistic rendering.

If this had been an automotive industry exhibition, it would have been considered a dud in this respect.

You couldn’t ignore the oil and gas majors. No one doubts the importance of lubricants in wind-turbine operation or the part they play in diagnostics and preventive maintenance, but the stand size and public relations push of Shell, Exxon and BP Castrol was palpable.

They didn’t appear to have a great deal new to say, but they knew how to say it at great volume.

The overriding impression gained from attending a number of conference sessions was that the wind industry is rather less certain of its future direction than it likes to pretend.

Beneath the predictions for future growth, the opportunities afforded by electrification of transport and heating, and the declarations of having won the economic argument, there was little to see on how the renewables lobbies are closing the huge gap that remains between themselves and most of the policymakers. 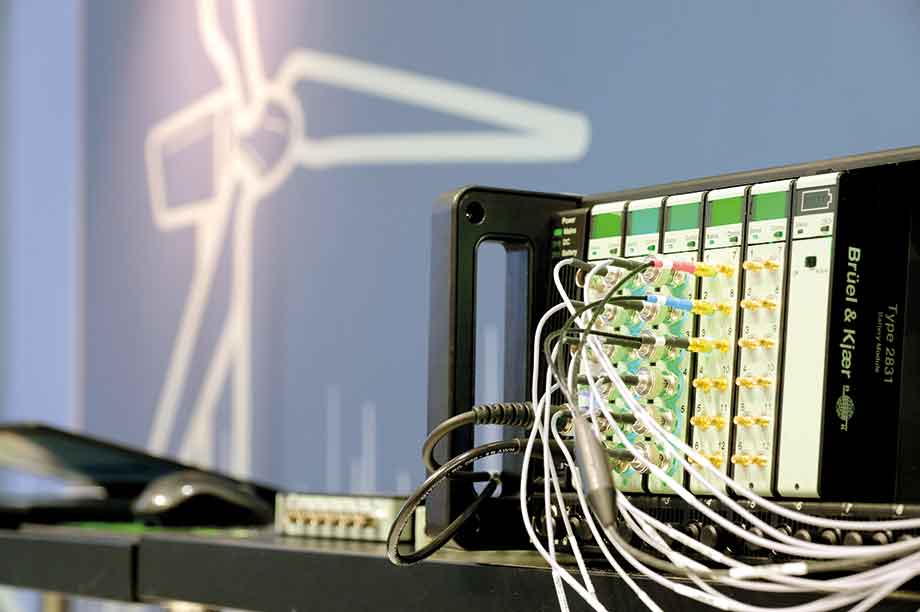 The assumption that climate change will drive administrations to divest urgently from fossil fuels looks naive when the US is rolling back environmental protection legislation, the UK is firing-up its fracking programme, Canada has no intention of leaving its oil in the tar sands, and Australia is propping up its coal industry.

The political will to drive the transition towards renewables remains patchy at best, and the wind industry’s case is not cutting through.

Is part of that caused by the industry sending mixed messages over onshore and offshore wind?

Giving policymakers the argument that offshore wind will be the cheaper in a couple of years, and without the disputes over the visual and aural environmental impact of onshore wind, risks allowing the can simply to be kicked further down the road by policyholders in no hurry to make the sweeping changes required.