The Turkish lira has lost more than one-third of its value against the US dollar this year and inflation is soaring.

Turkey’s government has cut economic growth forecasts and to prevent an even sharper fall in the currency, the central bank raised key interest rates, bringing them to their highest level in nearly 15 years.

With feed-in tariffs paid in US dollars, inflation and currency volatility have not been much of a concern for operating renewable energy assets in Turkey, points out Andi Aranitasi, a senior banker with the European Bank for Reconstruction and Development (EBRD).

"The main issue now is financing for new renewable projects, given that the majority of financing comes from Turkish banks and the cost of funding is now higher," said Aranitasi.

"As a new investor, you have to make a choice. Do you want to go ahead now and accept higher interest rates and put in more equity or not?"

Many investors are likely to choose the second option. 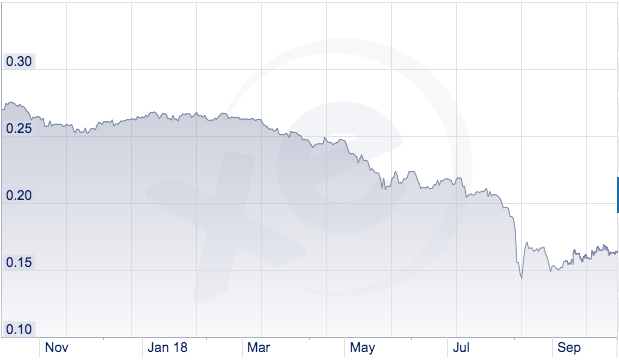 Turkish Lira to US Dollar rate over the last 12 months. source: XE.com

"We have some very good wind projects in Turkey and the auction system is also working pretty well," said Gokhan Baykam, CEO of Relight Capital.

"But unfortunately, the situation with the Turkish lira creates some financing problems."

Turkey had 7.1GW of installed wind power capacity as of 1 October, according to Windpower Monthly's research and data division Windpower Intelligence.

"We are constantly working with our partners to adjust and remain flexible in the face of changing market conditions," said Siemens Gamesa Renewable Energy (SGRE). In a consortium with local partners Kalyon Enerji and Turkerler Holding, the manufacturer last year secured the right to build 1GW in onshore wind farms through the tender system known as Yeka — the Turkish acronym for "renewable energy designated area".

"The company is committed to the market and to previously agreed contracts," SGRE added.

According to local press SGRE is making progress towards its commitment to open a nacelle factory and has chosen a site in Izmir's Aliaga district.

Despite the unsteady economy, the Turkish energy ministry in October announced plans to tender four 250MW lots for onshore wind via the Yeka auction system.

While the ministry in June also announced a 23 October deadline for submitting bids for a 1.2GW offshore wind project that would be the country’s first, some market participants believe a postponement would be advisable.

The fate of 2.8 GW of projects that received preliminary licenses at end 2017 is also unclear.

"Everyone is still in the permitting process, but I see serious delays in these projects due to a lack of cash," said Christian Johannes, general manager of wind consultancy Re-consult.

Meanwhile, a number of operational wind farms and operators are on the sales block.

Some holding companies that operate electricity distribution regions are in "serious need of cash," said Johannes, noting that they earn revenue in local currency but need to repay loans in dollars or euros. "Many of these have wind farms and quite a few are up for sale."

As part of a foreign debt restructuring agreement, Turkish conglomerate Gama has sought a buyer for its 50.5% stake in Gama Enerji, a wind, hydro and natural gas power producer.

But some observers view current economic difficulties as just a bump in the road.

"It’s not the first time we’ve seen a currency crisis in Turkey," said Relight’s Baykam. "We are long on Turkey and long on renewables."

And Fitch sees an upside to the current turmoil, arguing "renewable energy will remain an attractive investment in Turkey over the longer term, as lira weakness accentuates the importance of switching to domestically sourced power generation."