Its pilot ETES facility, which stores energy in 1,000 tonnes of rock fill at temperatures of 600C, is currently in its final phase of construction and is due to be fully commissioned in 2019.

Heat energy stored in the rock fill can be converted back into 30MWh of electricity by a steam turbine.

The facility addresses the issue of how to balance supply and demand when integrating intermittent renewable energy sources – such as wind – into the energy system, the manufacturer explained.

Storage facilities can be use to buffer periods of low wind or solar production, Siemens Gamesa added – when the air is still or the sun is not shining.

Meanwhile, at the end of the storage chain, a dynamic steam boiler can be used in a steam turbine to produce electricity. 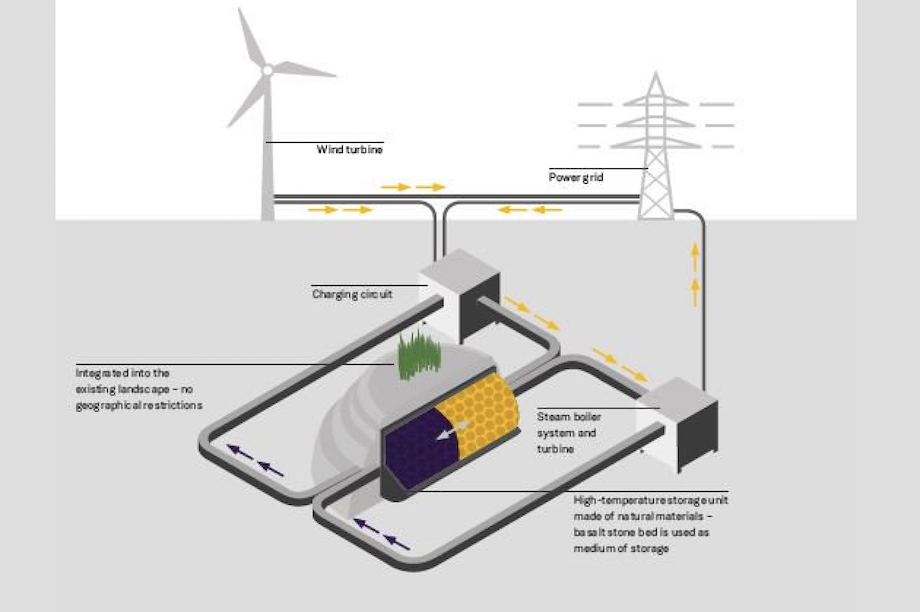 Energy supplier Hamburg Energie, which worked on the project alongside scientists from the Technical University of Hamburg’s Institute of Thermo-fluid Dynamics, will sell the power stored by the ETES on energy markets.

Siemens Gamesa claims that its ETES facility has reduced construction and operations costs compared to the usual level for battery storage. It stated that in commercial use, the ETS can store energy at "well below" €0.10/kWh.

All of its buildings and main components have already been completed, Siemens Gamesa said.

After extensive tests, the new storage facility will be incorporated into regular operations in partnership with Hamburg Energie.

Siemens had first started exploring the concept of storing energy in rocks in 2014, prior to its merger with Gamesa, and announced it was due to begin construction in February 2018.

Industrial services provider Bilfinger developed and delivered the water-steam cycle for the project as well as provide plant engineering.

Siemens Gamesa provided the heat storage, boiler and wind turbines for the project.

Meanwhile, the manufacturer has also broken its record for tallest onshore tower by nine metres.

It installed one of its SWT-DD-130 model with a 165-metre-high tower and power rating of 3.6MW at a wind farm near Vetschau in Brandenburg, north-east Germany.

We’ve just installed our tallest #onshore tower with 165m hub height in #Vetschau Germany. Congratulations to our project and operations team, working together with our partner @MaxBoeglGroup to enable highest energy output for our customer.#WindMotion pic.twitter.com/oBAXWseNXC

Siemens Gamesa has not disclosed the name or owner of the site.