The pressure on cutting wind power’s levelised cost of energy (LCOE) has been particularly intense since around 2013, according to Moventas CEO Arto Lahtela. He cites the continuing economic difficulties that have led to a number of central governments across the globe making budget cuts, together with strong price competition from lower-cost country suppliers as the key factors.

"Parallel to that, there was widespread agreement within the wind industry that 3MW-plus turbines would dominate the onshore market into the 2020s," says Lahtela. "We introduced the 3MW-plus Exceed technology in 2014 as a result, which involved a big investment in production machinery. But it proved to be a good decision with continuing benefits for Moventas."

Lahtela is quick to add that the introduction of 4-5MW-plus onshore turbines is happening quicker than most had expected, as the introduction of competitive tendering systems adds further pressure to the requirement to cut LCOE. Rotors for these turbines, now approaching 160 metres in diameter, turn slower, which places additional cost pressure on gearbox suppliers to reduce their cost per unit input torque, expressed in €/Nm.

"This has turned out well for Moventas," says Lahtela. "The combined benefits of Exceed Evolution provide us with a competitive product-market edge. The Evolution offers 15% higher torque density [Nm/kg] than Exceed, and roughly 35% more than similar-rated conventional gearbox designs, though much depends on drivetrain configuration."

Cheaper, lighter, more compact gearbox designs feed their way through to lower-cost and reduced-mass drivetrains, and on to the complete turbine. "Furthermore, the wind industry has become mature and does not want single gearbox sourcing any more. It needs to curb supply chain risks," says Lahtela.

"Also, the lifetime of a turbine platform is getting shorter. We continuously look at ways to make our products more competitive and flexible, and to grow our client portfolio, which now includes several strong OEMs. "

Specifically, that means concentrating on turbine-specific gearboxes that suit individual client needs and are optimised at platform level.

The Exceed range features two planetary and one parallel stage for a torque-to-mass density of 135Nm/kg, says Moventas chief technology officer, Jyrki Virtanen. This compares favourably to the 60-80Nm/kg value for state-of-the-art 2MW gearboxes from 2006, but which featured one planetary and two parallel stages.

The Exceed Evolution boosts torque density to a whole new level, explains Virtanen, walking through the new production facility. This has meant the company has had to develop new manufacturing methods and processes. The factory layout and assembly process are optimised for deploying self-moving unmanned electric vehicles, for example, to transport parts internally from the delivery area to moving, completed sub-assemblies.

"These processes all build on those already proven for our 3MW Exceed gearboxes," says Virtanen. "The main difference is that the Exceed Evolution planet carriers are now assembled in a common space, though again with two parallel lines for the remaining gearbox-assembly stages."

One thing that is immediately noticeable in the planet-carrier assembly area is how relatively wide the planets are compared to their modest diameter. This has been made possible by combining Moventas’ patented "Flexspider" — flexible planet wheel shaft mounting technology to secure even load distribution — with a new high-strength planet carrier, a design that offers higher structural flexibility than the original Exceed technology. Also new for Exceed Evolution are the incorporation of high-performance journal bearings in all gearbox positions, except for the easy-to-access planet carrier that has conventional roller-type bearings.

In-house journal bearing testing and optimising is performed in a climate chamber, where various main operating conditions can be tested and validated, such as lubricating performance, temperatures and load variations, as well as critical cold-temperature start-up procedures.

Following gearbox assembly, each unit is flushed at one of the external flushing stations. This essential pre-assembly step removes harmful metallic and other particles from inside the gearbox until a safe impurities level is achieved. This flushing happens initially in stationary condition to prevent any bearing and gear surface damages by larger particles still inside. Each flushed gearbox is then individually moved to a new 7.5MW test bench with the aid of an air-cushioned transport system. The test bench is fully instrumented for distance monitoring all main gearbox functions, including vibrations and external temperatures, with the cover mounted.

"Our workflow system with gearbox flushing stations is designed for maximum flexibility and the optimal utilisation of available test bench capacity," says Virtanen. "The device is suited for gearboxes of up to 7.5MW power and over 50kNm output torque. Our largest gearboxes are in the currently in the 4-4.5MNm range for 4.0-4.5MW turbines, so there is substantial capacity left."

During the ramping up of the new facility, some fully tested units have passed through the final assembly stage and are awaiting shipment. Final-stage assembly involves fitting sensors, condition-monitoring systems, electric motors and coolers, and the final inspection. Several other gearboxes have already left the factory for field testing in 4-4.5MW prototypes, says Virtanen. Two gearboxes with distinct colour schemes have just completed a comprehensive pairs testing programme on the back-to-back test benches.

Moventas has developed and built all its own gearbox test benches, including a 10.5MW unit located in its research and development facility, also in Jyväskylä, except for electric machines. A novel feature of the intermediate gearboxes is a fully adjustable output shaft position for linking an electric machine with any commercial gearbox. 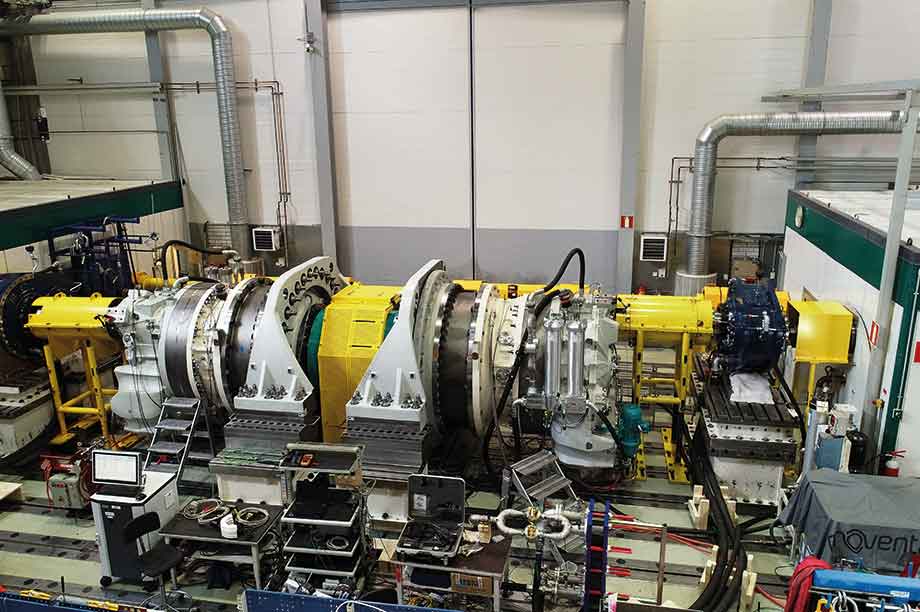 Moventas’ gearbox technology and experience, together with its in-house materials and know-how, are the building blocks for a comprehensive technology roadmap, says Virtanen. Heat treatment is a key area of expertise, opening new doors for what might become feasible in terms of high-performance materials for journal bearings.

Such technology solutions are rarely deployed immediately, but can be turned quickly into a new concept introduction when a customer issues specifications for a new product, explains Virtanen.

"Being a medium-sized supplier has its limits, but it allows us to be faster and more agile in introducing changes to the production processes. We put great effort into optimising and validating each new product at systems level because turbine dynamics behaviour is dependent on many parameters and differs for all individual turbines."

The Exceed and Exceed Evolution innovations and experience have together resulted in a highly compact gearbox — a ring-gear outer diameter of only around 1.9 metres for the low-speed planetary stage, for example — concludes Virtanen. The introduction of journal bearings for the Evolution range has also been an essential factor in raising gearbox design life to 30 years, he adds.

"Our key clients tell us that we currently offer the lightest and most compact gearbox available in the market for 4-4.5MW turbines, and for the 5MW-plus machines under development."

In the first-generation Exceed with cylindrical roller bearings in the planet wheels, the leap in torque density over conventional gearbox design was achieved through five parallel measures.

"Reduced low-speed stage dimensioning has a substantial positive impact on the the dimensions and mass of the other gear stages and the total gearbox mass," says Virtanen

"The fourth step involved reducing the mass of large cast components by optimising shapes, component stiffness and strength through the removal of non-functional material whenever possible, but without sacrificing performance and lifetime."

Wind cluster will be capable of delivering nearly 1% of Finnish electricity production when completed, developer claims