The platform consists of four cylindrical floaters at the extremities of the X-shaped pontoons, with a central floating platform for the turbine and a light steel structure to provide horizontal bracing. It was designed from the start for turbines of 10MW and above, with a twin focus on ease of mass production and keeping overall dimensions to a minimum, Heisel says.

The innovative concept has been developed and patented through a partnership between Ceteal, which specialises in designing foundations for offshore wind, and tidal energy, and French developer Nass&Wind, which piloted the WinFlo floating project with DCNS (now Naval Energies). The two companies started talking in 2015 about designing a more efficient platform for turbines over 6MW, Heisel explains.

Building on the knowledge and experience of Ceteal’s sister company Mareal, which has more than 15 years’ experience in offshore design for the oil and gas industries, the aim was to come up with a solution that is as simple as possible and therefore less prone to failure. Heisel recalls they used a spreadsheet to create the design, applying calculations to check the concept but not drive it. "The best way to deal with problems is not to have them in the first place," he says.

One of the first decisions was whether to design the platform for reinforced concrete or steel. Concrete won out, Heisel says, because it is less prone to fatigue and corrosion, has a longer lifespan, is much cheaper and draws more on the local supply chain.

With its rounded components, the concept relies on shape resistance to give strength and help ensure seakeeping. It also means the structure does not suffer from wave slamming or green-water loading, when seawater washes over the top of the structure.

The pontoons consist of an internal rectangular frame that resists the overturning moment, protected by a cylindrical outer shell to resist wave pressure.

Preliminary studies had shown that three floaters were not enough for large turbines, so Ceteal opted for four. This has the added advantage of providing a symmetrical design with two axes of symmetry, so that the behaviour of the platform is the same whatever the direction of the waves. This means the XCF can handle severe multi-directional environments, such as those that occur in cyclone regions. Four floaters also provide more redundancy in case of damage.

The XCF could also be built with six or even eight pontoons and floaters. "Since 12MW turbines have only recently emerged, we don’t yet know all their characteristics," says Heisel. "It might be more economic to have six floaters, depending on the harbour facilities and site conditions."

The design is flexible in many other ways, too. There are several options for fixing the turbine tower to the central floater, for example, and while it is designed for simple and well-proven catenary mooring, the platform can be adapted for a tension-leg system.

The XCF can also be made in steel, although this will not be as effective, Heisel says. Steel has the same volume as concrete but less weight. This means that the ratio between dry weight and buoyancy is very different, requiring different dimensions and giving a different economic optimum.

The platform can be adapted for different-size turbines, but this is best treated as "a package". The frequencies of the turbine depend on the behaviour of the foundation, with some tolerating less tilt than others. "It is very important to have a coupled design of the turbine and platform," Heisel points out. This is important not only for the floater coupling, but also with respect to the port facilities. Taller, heavier turbines will impact the dimensions of the floater, and therefore the space and minimum water depth required in harbour.

As regards size, the footprint of the platform forms a square, with each side roughly half the height of the turbine, compared with around two thirds for less compact designs, Heisel says. For a 120-metre-tall turbine, the platform would measure around 60 by 60 metres. However, the modular format and x-shaped structure allow a more efficient use of dock space.

Construction was taken into account from the earliest stage, Heisel says, opting for a modular concept suited to mass production. The aim is to be able to build and install 60 platforms within a two-year timeframe.

The modules can be assembled on the quayside using small cranes capable of lifting up to 400 tonnes. The platform is then rolled on to a jack-up vessel or a semi-submersible platform before the turbine is installed, although there is some flexibility here too.The ideal water depth in harbour is 8-9 metres, but the design can be adapted to some extent to cope with shallower waters.

Once it is launched, the platform and turbine can be towed to site using two or three tugs with a combined capacity of 200-300 tonnes. The rounded shapes help here as well, because the lower drag means you can use cheaper, less powerful and commonly available tugs, Heisel states. Lower drag will also be a benefit for seakeeping in areas with strong sea currents, such as in some parts of Asia, he adds.

The structure will cost around €5-6 million, depending on the local availability and price of the raw materials, local labour costs and the harbour facilities. Optimising the design for concrete allowed the team to reduce costs in a number of ways.

Thanks to the shape resistance, the concrete does not need prestressing to add resilience, a feature unique to the XCF, Heisel says. And because it does not require prestressing, it can be made out of a lower, cheaper and more readily available grade of concrete.

By the same token, the concrete also needs a lower ratio of steel reinforcement. Depending on the turbine, the XCF needs around 150-200kg per cubic metre of steel, perhaps half what its competitors are likely to use, Heisel estimates.

Heisel admits that the Capex cost of the XCF might be a little more expensive because it incorporates a lot of monitoring equipment. However, this will allow "huge economic savings during its lifetime", he argues. "The focus is on the total price: Capex, Opex and decommissioning."

Again, maintenance formed an important part of the design process from the outset. An array of cameras and sensors — all of which are accessible and can be replaced — allows the team based onshore to see what is happening and monitor the behaviour of the platform 24 hours a day. If there is a problem, they can analyse it remotely and design a solution at the base, before sending a vessel to carry out repairs. This saves time and money, Heisel points out. The mooring lines are also monitored continuously, so the maintenance team can detect any biofouling and pump out ballast water to compensate for the extra weight.

In more serious cases, if there is a an accident such as a ship colliding with the platform, engineers can analyse how critical the damage is remotely and stabilise the platform to restore functionality, without first having to send out a vessel or helicopter.

In addition, if maintenance staff are caught in rough weather, they can safely walk from one part of the platform to another and access the turbine via internal walkways within the concrete pontoons, Heisel notes.

The XCF has completed the first phase of tank tests (pictured, right), used to calibrate and fine-tune the hydrodynamic coefficients, and is going through the certification process. At the same time, Ceteal and its partners are optimising the design further, aiming to reduce the size of the pontoons and refine the concept for 12MW turbines.

Apart from Nass&Wind, other partners in the design team include Keops Performance Group for monitoring; Kraken Subsea Solutions for electric cables; and Nantes-based Charier for logistics.

They are now looking for investors and industrial partners in order to build a full-size demonstrator.

Because of the cost of building a single demonstrator, ideally they would like to add it to a large commercial project using gravity-based foundations, where the developer has already selected a port capable of making large concrete structures.  As an added benefit, it would also be interesting to compare the output and behaviour of the same turbine on a floating XCF and fixed-bottom gravity-based foundation, Heisel notes.

In the meantime, they have replied to two requests for interest to equip 500MW projects, one in Asia and the other in France.

A number of floating platforms are already in service or close to deployment. Hywind’s spar buoy was the first in the water in 2009, supporting a 2.3MW Siemens turbine, and the technology took a major step when Equinor (formerly Statoil) commissioned the five-turbine 30MW Hywind Scotland project last year.

It remains the world’s only commercial floating array, and Equinor is pursuing other avenues for the technology, notably to support oil and gas extraction in the North Sea.

Principle Power’s steel semi-submersible design, known as WindFloat, successfully completed a five-year demonstration phase with a 2MW turbine off the coast of Portugal in 2016. It will be followed by the much larger-scale WindFloat Atlantic, a three-unit project that will use 8.4MW MHI Vestas V164 turbines, the largest yet to be installed on floating foundations, It is scheduled for commissioning in 2019.

WindFloat Atlantic will operate in water depths of around 100 metres, about 20km from the north-west coast of Portugal. Unlike Hywind Scotland with its standard 33kV cables, it will be supplied with 66kV inter-array and export dynamic cables.

The Windfloat design has also been selected for the three-turbine 24MW Golfe du Lion project in French waters, while Principle Power is also a member of the consortium chosen to develop a 100-150MW floating project on the coast of California.

Ideol’s pilot Floatgen concrete platform (below), featuring its innovative "dampening pool" technology with a 2MW Vestas turbine, was installed at a French site in April. A steel version of Floatgen was also recently installed off Kitakyushu in Japan, supporting a two-bladed 3MW Aerodyn turbine. Ideol will also supply four floaters for EolMed’s 24.8MW project off Le Gruissan in the Mediterranean. 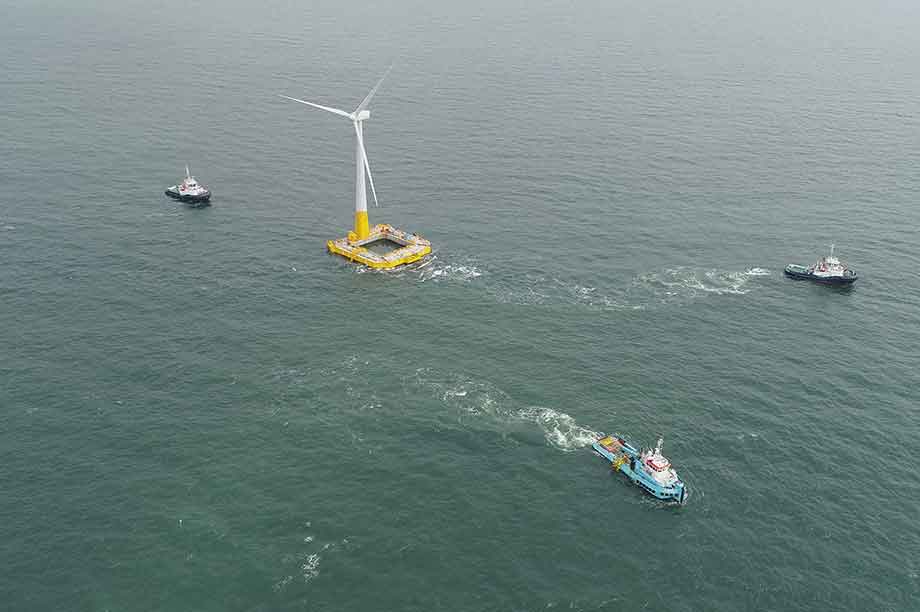