New Jersey's Board of Public Utilities (BPU) approved the solicitation at a meeting on 17 September.

Solicitations must be received by 28 December, and the BPU said it plans act on them by 1 July 2019.

The state has goal a goal of 3.5GW of offshore wind by 2030, the most aggressive target in the US. Governor Murphy signed an executive order in early 2018 calling for the target.

"Every day that we don't act to reverse the effects of climate change is another day that we abandon our economic, social and moral obligation to create a safe, clean environment for future generations,'' Murphy said.

"In the span of just nine months, New Jersey has vaulted to the front of the pack in establishing this cutting-edge industry," he added.

In remarks at the climate conference, Murphy described offshore wind as the "anchor" in the New Jersey's plan to combat climate change. 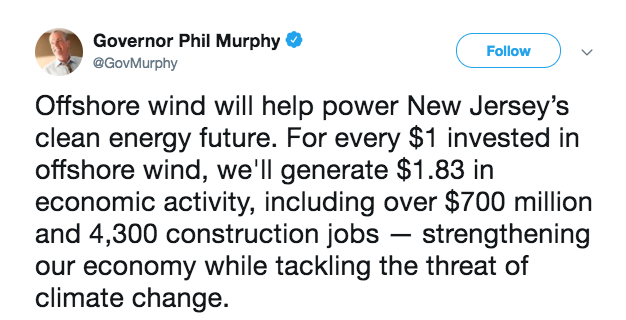 Earlier this month, the BPU accepted an application for a 25MW Nautilus demonstration offshore wind project being developed by EDF Renewables and Fishermen's Energy.

EDF said this first demo project is "a crucial first step" towards meeting that target.