On the opening day of its Clean Energy Summit (31 July-1 August) taking place in Sydney, the Clean Energy Council found many companies were planning to grow their work force in the next 12 months.

This short-term confidence is backed by the 6.5GW of renewable energy capacity that had been committed to at the end of 2017 – enough to take the country beyond its 33TWh renewable energy target for 2020. 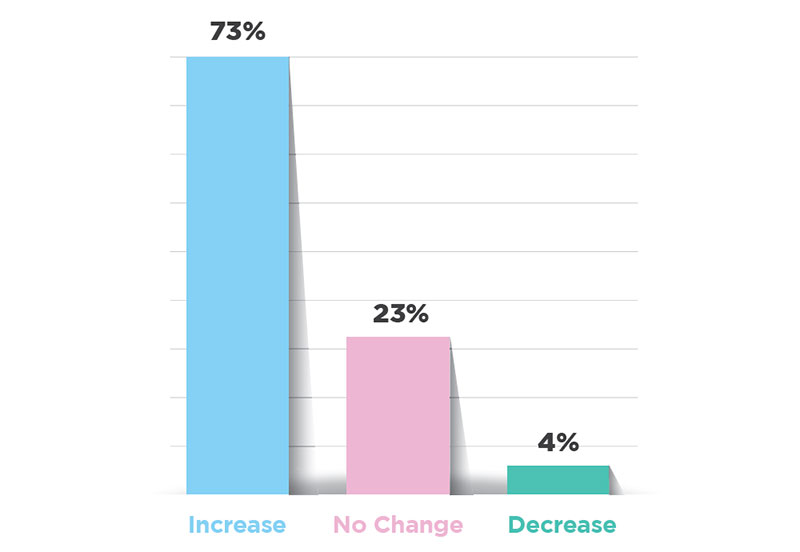 Survey respondents confident they will increase their workforces in the next 12 months. source: Clean Energy Council

However, with this scheme set to expire, and currently a long-running debate over how to replace the RET, survey respondents exhibited long-term caution.

"Responses indicated that network connections were an increasing bottleneck and companies are concerned by the rapid change to connection processes and requirements," the CEC noted.

The survey also said the industry’s confidence to make further investments over the next three years averaged a 6.9 out of ten, the CEC added.

Kane Thornton, CEC chief executive said: "The industry has been in a record growth phase, but those who have been around for a while have not forgotten the lean years in the middle of the decade caused by chronic political and policy uncertainty."

A number of states have expressed doubts over the proposed RET replacement, the national energy guarantee (NEG), which is expected to fall short of international emissions and clean energy targets.

Unveiled in October 2017, the NEG is a technology-neutral system that removes support or tax for all generators, "creating a level playing field for all energy sources".

The coalition government’s proposal, led by Liberal Party prime minister Malcolm Turnbull, has also been met with criticism from within the ruling party.

Abbott also called for Australia to follow Donald Trump’s footsteps to quit the Paris climate change accord and end "the emissions obsession that’s at the heart of our power crisis," the Guardian newspaper reported in early July.

Back at the Clean Energy Summit, the CEC has also promoted a "best practice charter for renewable energy developments".

The voluntary scheme, which was launched with 37 signatories, sets out ten promises developers and project construction companies would adhere to, to respect local communities.

"Renewable energy is now the lowest cost kind of energy generation we can build today, and regional communities will see more of these projects over the coming decades.

"The industry understands we need to invest strongly in bringing local communities with us on the journey to secure the clean energy sector’s long-term success," the CEC’s Thornton said.

Pledges included cooperation with landowners, sensitivity to local ecology or cultural value, and offer local community employment and other benefits.

"We are confident this prosperity will continue over the next couple of years, but it’s essential that we can return secure bipartisan support to ensure the transition to clean energy continues at the lowest possible cost to consumers," Thornton added.