Chennai is a wind-power and automotive-industry hub, where 200,000 engineering students graduate each year.

Many people employed in the wind industry come from the automotive sector, attracted by the higher salaries, even if there is less job security, according to the two companies.

The transition from the old feed-in tariff system to the new renewables auction system resulted in a temporary slowdown for production output during the first two to three quarters of 2017.

The auction system has also increased competition, forcing suppliers to rethink and, if necessary, adjust their product portfolios, their supply chain strategies or both.

In fact, the industry is expected to exceed the official target, with some suggesting it could be as high as 80GW, which would mean installing about 12GW a year.

Nordex established its Indian subsidiary in mid-2015, a year before its merger with Acciona Windpower. The company is incorporated in Bangalore, and its new nacelle assembly plant is located about 84km north of Chennai International Airport.

This is the group’s second factory outside Spain dedicated to the 3MW AW3000 nacelle, hub and low-speed shaft assembly.

"The factory layout in Chennai is a satellite design of the AW3000 plant in Spain. We can produce 200 nacelles, or around 600MW, annually in a two-shift system, but we can scale up to 1,000MW with three shifts," says plant manager Harihar Panigrahi.

The final steps involve fitting the rear and roof covers, followed by a full-system test of all individual completed nacelles and hubs.

"The low-speed main shaft and hub are pre-assembled in separate floor areas, currently within a single-shift production system," says Panigrahi.

"During the plant start-up phase, Spanish support teams were brought in to develop and train local teams at managerial levels and on necessary technical skills."

The nacelle production process is supported by overhead cranes moving along rail tracks along the main hall’s longest side.

These are supplemented by in-house developed "intercarts" moving at cross-pathways between the parallel production system areas. Alongside areas for hub and low-speed shaft assembly, there are dedicated zones to receive and inspect incoming components, check bearings, and for temporary storage.

"Some main components like the main shafts and the castings are still imported today, but the plan is to also source these from India in future.

"We produced the first nacelle and hub in July 2016, and by the end of June 2018 Nordex India had assembled 40 units of the 3MW AW125/3000 volume model. This is currently also the highest rated turbine made in India."

The company has expanded the platform, adding the higher rated 3.3MW AW132/3300 with a 132-metre rotor, and launching the AW140/3000 with a 140-metre rotor in October 2017. This latest model is optimised for specific low-wind conditions, making it a perfect fit for India.

It has already been offered for the latest auctions in the country, with a commissioning timeline from the second quarter of 2019. An AW140/3000 prototype was recently installed in Spain and the type certificate is expected in September.

"We also opened a concrete tower factory in Bijapur, Karnataka state, and a blade plant in Chennai. The latter is a joint-venture with a third party. It produced the first blades in the second half of 2017, and now serves our local AW 3000 blade demand and export markets."

Vestas Wind Technology India, headquartered in Chennai, Tamil Nadu state, is one of the country’s oldest foreign turbine manufacturer subsidiaries, boasting a cumulative installed base of more than 2.3GW (May 2018). Vestas India currently employs more than 2,200 people across the country.

In 2017, Vestas took in orders for around 620MW, including 250MW awarded in the first auction organised by Solar Energy Corporation of India, and all for 2MW-class turbine models.

"India has high renewable targets and a strong focus on hybrids, so we have to learn quickly from these new challenges and experiences to continue to be successful".

"The first V120-2.2MW blades were made in India this year, and our nacelle factory will produce the 2MW platform nacelles. Vestas also received the first order for V120-2.2MW turbines globally in March this year for a 50MW project in India.

"The V120-2.2MW’s main benefit is that it delivers a more stable energy production, with a higher power output level at lower wind speeds. That’s why we believe it’s a perfect fit for India’s low-wind conditions and the new auction system, which will keep us busy going forward," says Variawa.

Vestas India’s main company base in Chennai comprises a state-of-the-art assembly plant for 2MW nacelles, a hub factory and a research and development centre — the firm’s largest R&D facility outside Denmark.

It provides global support to all Vestas product platforms and acts as a global Vestas training centre.

Last year, the company inaugurated a new blade plant in Ahmedabad, in the state of Gujarat, dedicated to 2MW platform rotor blades. 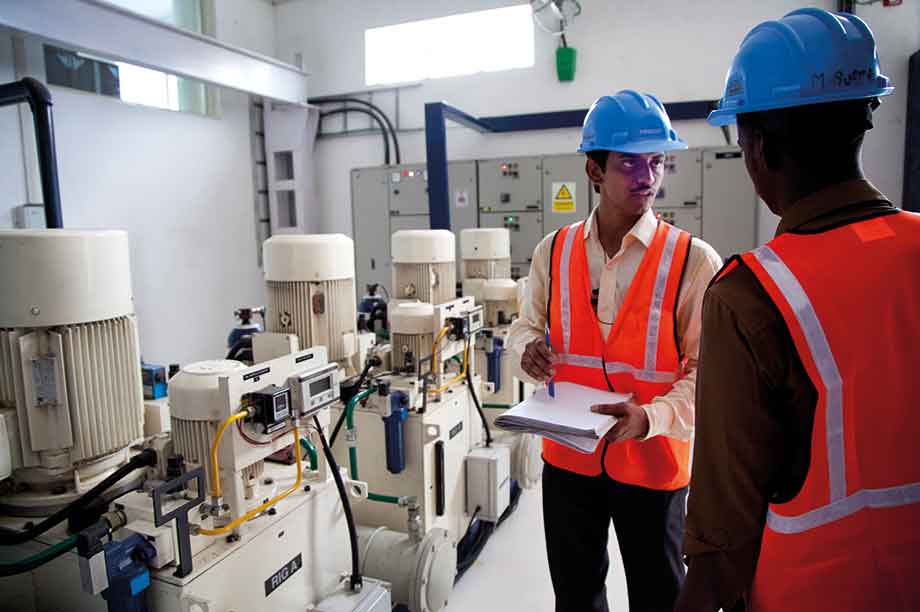 Turbine main components originate increasingly from India, such as the fully machined castings produced in Puna, Maharashtra state to the north-west of Tamil Nadu.

"The manufacturing plant and local sourcing form an integral part of the nation-wide ‘Make in India’ initiative aimed at creating local jobs and developing a local wind power expertise base", says Variawa.

The nacelle assembly process is organised in two parallel lines, one for drivetrain component and hub assembly, the other dedicated to the nacelles during various assembly stages, starting with mounting the yaw bearing to the main carrier.

Multi-wheel movers transport the nacelle to the next station within the factory, and cover and hub mounting are the final process steps. The characteristic Vestas-design rooftop cooler is mounted at construction sites for easier transport.

Pioneering past in India — Building on three decades of cooperation

Vestas came to India in collaboration with Indian firm RBB. After their joint venture split up in 2004, Vestas RBB remained an independent sub-megawatt turbine supplier.

The same year, Vestas and NEG Micon merged, as did their operations in India, renamed Vestas India in 2006.

Vestas closed its Indian operations in 2012, to "re-evaluate its current business set-up and approach in India’’, but re-entered the country two years later.