In a scenario in which the UK’s decarbonisation targets are met by large-scale generation on the transmission network, offshore wind farms could have a combined capacity of 29.9GW by 2030 and 43.4GW by mid-century.

The report set out four possible forecasts based on differing levels of decarbonisation and decentralisation.

However, under a more decentralised scenario whereby the UK fails to achieve the 80% carbon reduction by mid-century, UK offshore capacity might only reach 16.8GW by 2030 and 21GW by 2050, according to National Grid. 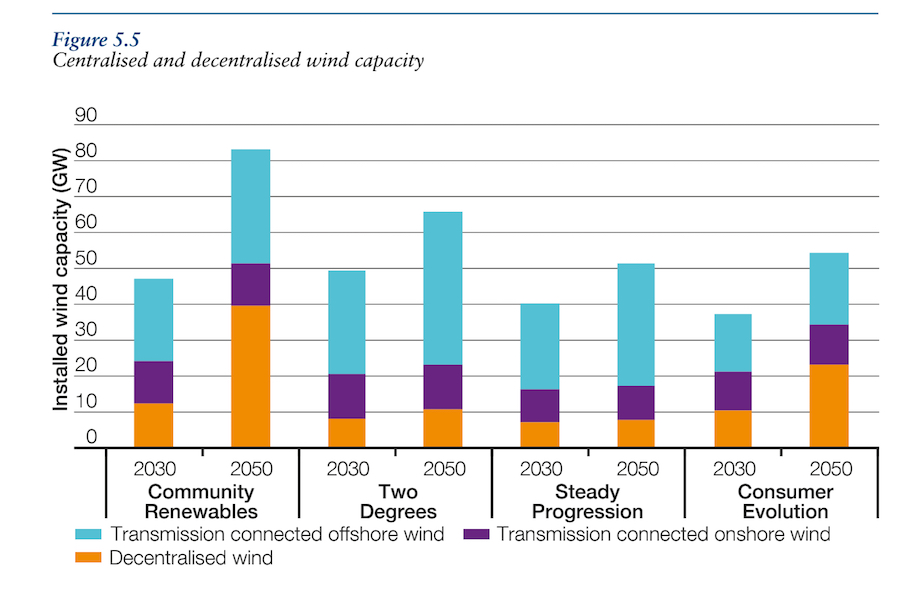 National Grid also predicted onshore wind will grow in all scenarios. However, a "facilitative policy environment for local wind schemes" is assumed in each forecast.

Under the most favourable scenario, in which the energy landscape becomes more decentralised, onshore capacity could reach 23.4GW by 2030 before expanding to 50.7GW by mid-century.

The grid operator stated due to its "favourable wind conditions and availability of land", much of this capacity growth would be in Scotland.

However, under the ‘steady progression’ pathway, minimal growth could lead to total onshore installations reaching 15.5GW in 2030 and 16.4GW twenty years later.

In this scenario, there is a greater emphasis on large-scale generation, including offshore wind and nuclear, as opposed to the more localised solar and onshore wind projects.

There would be "little difference" in cost between the two scenarios in which wind – onshore and offshore – expands the most: Two Degrees and Community Renewables.

However, the report's authors wrote: "We anticipate some positive spill-over effects from offshore wind developments. This could include innovation in maintenance and the further growth of supply chains.

"Co-location with storage is another factor that can enable developers to reduce connection costs and access other revenue streams."

Under all its scenarios, National Grid predicts:

National Grid’s report comes in the same week that the UK’s National Infrastructure Commission issued a report recommending onshore wind be readmitted back into the contract for difference (CfD) auction scheme from the early 2020s.

Plans to end the previous Renewables Obligation support scheme were first announced in 2015, and the government also barred onshore wind projects from competing in the UK’s second CfD auction.

"These scenarios clearly demonstrate how government policy is central to the speed of decarbonisation and public adoption of cleaner technologies."

The UK currently has more than 12.1GW of onshore wind and more than 7.1GW of offshore wind installed, according to Windpower Intelligence, the research and data division of Windpower Monthly.