This means the industry is increasingly looking towards automation and technology that can analyse and potentially fix minor problems, reducing the need for an engineer to scale the turbine.

Siemens Gamesa Renewable Energy (SGRE) announced it was developing a blade-repair "robot" and an inspection drone at its capital markets day in February.

With drone technology becoming more popular — some predict the market to grow an average of 13% a year until 2021 — SGRE decided to develop a dedicated drone platform, along with the software to process the vast amounts of data drones can collect from a single turbine inspection.

"By 2022 there will be around 200,000 inspections a year worldwide. Given the technology maturation and the cost decrease, you need to build a platform that can scale," Larsen said.

The manufacturer is looking to launch its own drone inspection service later this year. The company believes drones could become the technology of choice for operators as it develops.

"I have customers who need to manage their O&M on a multi-brand fleet. [Our product] is a condition-monitoring tool that will help them inspect and manage their fleet’s blades," said Larsen.

"We built our own software for data processing. You need to look what it costs to send out equipment and people who inspect, and to do the data processing. And what does it cost to make a decision on what you see on the blades? One of the things we are investing heavily in is the automation of data processing.

"Unlike tools that you can buy from independent inspection suppliers, ours is built to ingest data from multiple sources and inspection types, from rope-access, ground-based and drone inspections."

Larsen believes while ground-based inspections remain the cheapest and most popular form of survey, the balance is set to shift as drone technology becomes cheaper.

"In terms of which technologies are best suited to what location, often ground-based survey equipment is more attractive than drones at the moment in low-cost countries," Larsen said.

"I think we’ll see a shift in that preference, especially for European markets. Already this year, drone inspections are exploding, and the costs are going down a lot.

"There is more potential in drone inspections. Ground-based equipment always has to both rotate and pitch the blades to work. It has reached its limit, but drone inspections have not," he added.

"It’s very regional and supplier specific. But if we just look at the period from 2016 to now, drone costs have dropped by at least 50%."

Larsen also spoke about SGRE’s work on a "robot" that can travel along a turbine blade. It can monitor blade conditions and perform basic servicing, including cleaning and polishing. 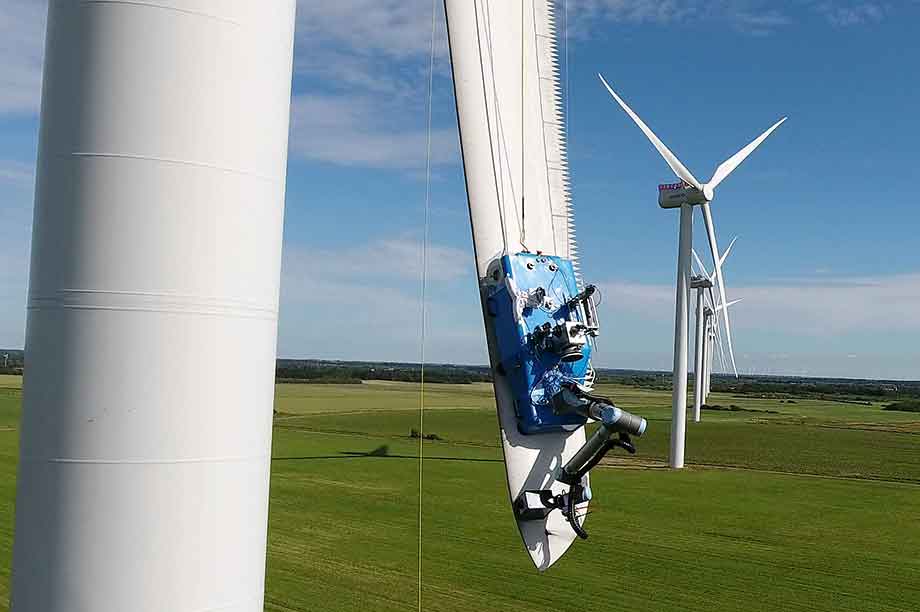 SGRE collaborated with Rope Robotics, a company launched by former SGRE employees, on the product, which will be piloted this year and could be launched commercially in 2019.

"It’s safer, for one thing. Any case where we can replace human operations with automation on the blade or in the turbine, there is the safety benefit. With this technology, you can continue to improve all the time. Any automation or gains you create keep lowering the cost."

"A robot could, in principle, operate in the middle of the night. It could operate in adverse weather conditions, when we might not be able to send a person to do it," Larsen explained.

"We call it semi-autonomous because some tasks are performed autonomously and some require human guidance. The target is to make it quicker."