The E-Charger 600 prototype began operating on 14 March at Aurich’s Energy, Education and Experience centre (EEZ), with the commercial launch planned for later this spring, starting in Germany before rolling out across Europe. The plan is to install up to 30 pre-series charging units this year.

Each E-Charger 600 is equipped with up to four charging columns, and claims Enercon, it offers the most powerful rapid-charging solution for electric vehicles (EVs) available on the market today. It is especially focused on the next generation of EVs, including high-performance premium cars such as the 600kW Porsche Mission E and Audi e-tron, plus vans and trucks.

The technology complies with the latest High Power Charging 2 (HPC 2) standard capable of charging up to four EVs at the same time with variable ratings of 50-350kW. This would, in an ideal scenario, take only around eight minutes to "refuel" a vehicle for a 400km-plus plus driving range. By comparison, Tesla’s maximum charging capacity is 60-70kW, according to independent e-Mobility experts at the launch, while ABB offers high-performance chargers up to 250kW.

The E-Charger 600 is a technology spin-off of Enercon’s frequency converters, says Alfred Beekman, head of the control technology division. "Converters are a core technolgical and integral part of our in-house E-Module, which is incorporated in over 28,000 turbines," he says. "Each frequency converter consists of two main functional parts. The ‘generator-side’ rectifier converts generator AC power with variable frequency into direct current (DC). The ‘grid-side’ inverter second part converts DC via a DC/DC bridge to grid-compliant AC power. We re-utlilise the modular inverter part, composed of standardised 60kW modules, and for the E-Charger 600, up to a maximum of 600kW.

The inverter DC-power output voltage is about 700V. Enercon’s main project partner, Germany’s Power Innovation, developed a dedicated DC/DC converter, which boosts voltage level to around 920V DC, sufficient for achieving 350kW charging capacity. Beekman adds that the solution retains the advanced grid support and grid stabilising features already incorporated in Enercon converters. A second built-in feature of the E-Charger 600 is the optional linkage to battery storage units, for use under demanding conditions when the grid is weak.

The product development fits well into Enercon’s strategy to open up additional sales channels for green energy. It also represents a diversification of its wind-turbine core business towards a fully integrated energy concept in support of the energy transition process in Germany.

"One key example is our co-operation with the Aurich district in establishing the Stadtwerke Aurich, a green utility that became operational in 2016 and in which Enercon has a 40% share, says managing director Hans-Dieter Kettwig. "Our long-term aim is to build an ‘ecosystem’ around our wind turbine key products. This will be gradually expanded with other integrated energy options like power-to-gas, battery storage, and innovative marketing models for wind power, including from older-generation turbines." Enercon was founded and is still based in the town of Aurich in Lower Saxony, north-west Germany.

Kettwig also elaborates on plans and strategies to integrate Lagerwey’s products and key technologies into a global product portfolio after acquiring the Dutch turbine maker.

"Enercon is a large, globally operating supplier with decades of product-to-market experience in many main markets. This small company has come up with several innovative and promising solutions, it could become a creative partner in smaller, developing markets for which it lacked sufficient leverage on its own. For us, a very promising development was Lagerwey’s business deal with Russia’s Rosatom, which involves initial turbine production in the Netherlands and/or Germany, followed by step-by-step localisation."

Kettwig adds that Enercon needs to be much faster in developing and adapting its products and process to rapidly changing market circumstances and increased competition, including a shorter time-to-market for new products. "Our next moves must therefore be very quick. We cannot take 36 months to develop and fully certify a new product," he says.

Lagerwey’s key products include the compact, lightweight 4-4.5MW L136 LP4 direct-drive platform, a modular steel tower and a self-installing crane. Kettwig says these solutions together offer substantial Capex savings and LCOE reduction potential on their own, and when integrated with existing and new Enercon products.

"The introduction of Lagerwey’s permanent-magnets generators could become a plan B, and we are evaluating several options for integrating elements of the LP4 turbines with our latest 3.5-4MW EP3 platform. Our strategy plan for the next two years will be presented at the Hanover international trade fair this April," Kettwig says.

Enercon established a successful majority joint venture with an Indian partner in 1994. However, after initial differences on turbine production numbers, quality guarantees, and intellectual property issues, the disputes escalated and Enercon withdrew from India in 2006. It decided last year to return to the Indian wind market with a fully owned local company, Enercon WindEnergy PTY Ltd, following a series of favourable court rulings since 2013-14, whereby all patents and other IP were reinstated.

"In the period until 2006, roughly 2,500 Enercon turbines were installed in India, and another 4,000 after the split," says Wolfgang Juilfs, Enercon’s new country director. "The former Enercon India Limited, later renamed Wind World (India), discontinued production in September last year and is now in insolvency proceedings.

Juilfs adds that due to limited quality of Wind World (India) O&M activities in the past two years, many of the turbines in the total fleet are no longer operating. Others operate only in curtailed modes, and there are problems with the supply of spare parts.

"The quality of the initial 2,500 turbines was good, but there is still little insight into the product quality of the turbines following the split, and the overall condition of the full fleet," says Juilfs. "To support Indian customers with the running problems of this fleet — mainly comprising E-32, E-40, E-48 and E-53 turbines, Enercon has teamed up with three local independent service providers. In addition, the first two containers with spare parts were recently shipped from Germany to be available in India before the start of the upcoming wind season in April/May.

Juilfs says there is still substantial goodwill among Indian clients towards Enercon GmbH in Germany, and that this "old" customer based is very interested in the new E-126 EP3 and E-138 EP3 turbines. 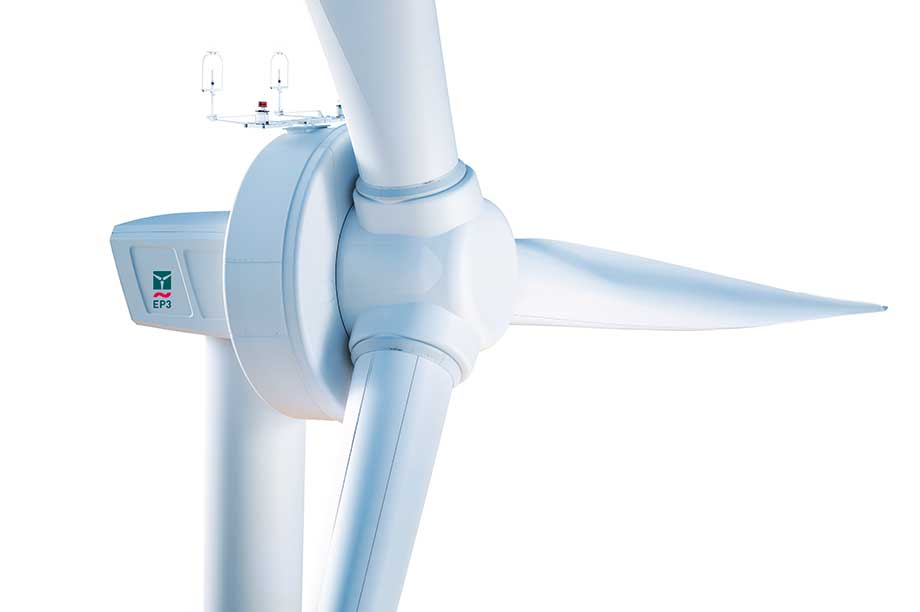 Step up… Enercon will offer its new EP3 model in India with a 138-metre rotor (pic:ENERCON GMBH)

The turbines will first come only with 135-metre concrete-steel towers, based on the classic hyprid design composed of multiple stapled coning rings with two or more tubular steel section on top. These towers and the rotor blades will be the first components to be localised, says Juilfs. "The blades will come from a local third-party supplier, but based on a dedicated Enercon blade design. We expect to require 12-15 months for his localising process, and this will be followed by additional main components for the local and export markets in Asia."

Nikolaus Kraus coordinates Enercon’s activities in Latin America, traditionally focused on Brazil, but with a growing eye on Argentina, which is poised to become the region’s second-largest wind market over the next few years, thanks to a government objective to install 6-7GW of wind power by 2025. Patagonia in the south of the country is blessed with very strong winds — up to 12m/s on average, and with low turbulence, Kraus explains.

"These wind conditions exceeed IEC I standards, and we offered our 3MW E-82 E4 model for a 27MW wind project under development. These turbines feature an 82-metre rotor, which is modest by comparison with some competitors’ offerings, but the combination of being slightly conservative, and our direct-drive technology seems to match well with client preferences," he says.

As in other Latin American markets, the product focus in Argentina is shifting rapidly to turbines in the 3-4MW class. Enercon already actively offers the E-126 EP3 in Argentina, as this turbine fits well at sites in the south due to the unusual combination of high wind speeds and low turbulence. "Currently, all turbine components are imported, especially from Portugal and Germany," says Kraus.

"Brazil might at first glance have seemed the logical choice, but pricing and transportation costs count for a lot. A main issue in Argentina is the port infrastructure and a key bottleneck is the availability of suitable cranes that can operate in high-wind conditions. This is where Lagerwey’s crane could perhaps play an important role, as it can be deployed in wind speeds of up to 15m/s," he says.