Under the agreement, Shanghai Electric will manufacture, sell and install SGRE's SG 8.0-167 DD machine, which it unveiled at WindEurope’s annual conference in November, in Chinese waters.

It builds on previously signed licensing agreements between the two companies for SGRE’s 4MW, 6MW and 7MW offshore platforms.

Upon deployment, Siemens Gamesa’s 8MW turbine is likely to be the largest installed off the coast of China.

Siemens Gamesa will supply blades from its blade plant in Lingang, close to Shanghai, a spokesman added.

Zheng Jihuana, Shanghai Electric’s president, said: "Introducing the Siemens Gamesa 8MW direct-drive wind turbine is not only an alliance between us as two leading wind power manufacturers, but also another successful win-win cooperation based on mutual trust and mutual benefit."

SGRE also offers the SG 8.0-154 turbine, which Siemens had announced prior to its merger with Gamesa. It has been specified for Ørsted’s 752MW Borssele I & II site off the coast of the Netherlands.

That may be its only deployment, however, as SGRE prioritises the development and marketing of the 8.0-167 model. The Shanghai Electric licensing agreement does not cover the 8.0-154 turbine.

SGRE's latest licensing agreement with Shanghai Electric was signed during CEO Markus Tacke’s trip to Japan and China this week to "strengthen business relations" between the two countries.

The two companies did not disclose a timescale covered by the agreement or a target capacity for the deal. 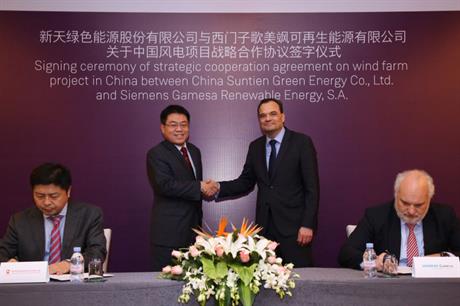 Suntien Energy operates wind power, solar PV and natural gas projects, and had roughly 28.2GW of wind power installed at the end of the first half of 2017, according to its website.

SGRE refused to offer any more information on the nature of the agreement other than that "the scope of the agreement is to analyse wind opportunities together – mainly wind farm development – in China in the next years".