The manufacturer will spend $400 million on engineering, testing and supply chain development for the turbine over the next three to five years, it said.

It is currently bidding the Haliade-X 12MW for projects with initial shipping expected in 2021, allowing for projects to be online starting in 2022, the company added.

GE is already working with customers for projects in "Europe, the US and possibly Asia", John Lavelle, GE Renewable Energy's CEO of offshore wind, told reporters.

GE claimed the turbine will produce 45% more energy than any other offshore wind turbine available today and will be capable of generating up to 67GWh annually. 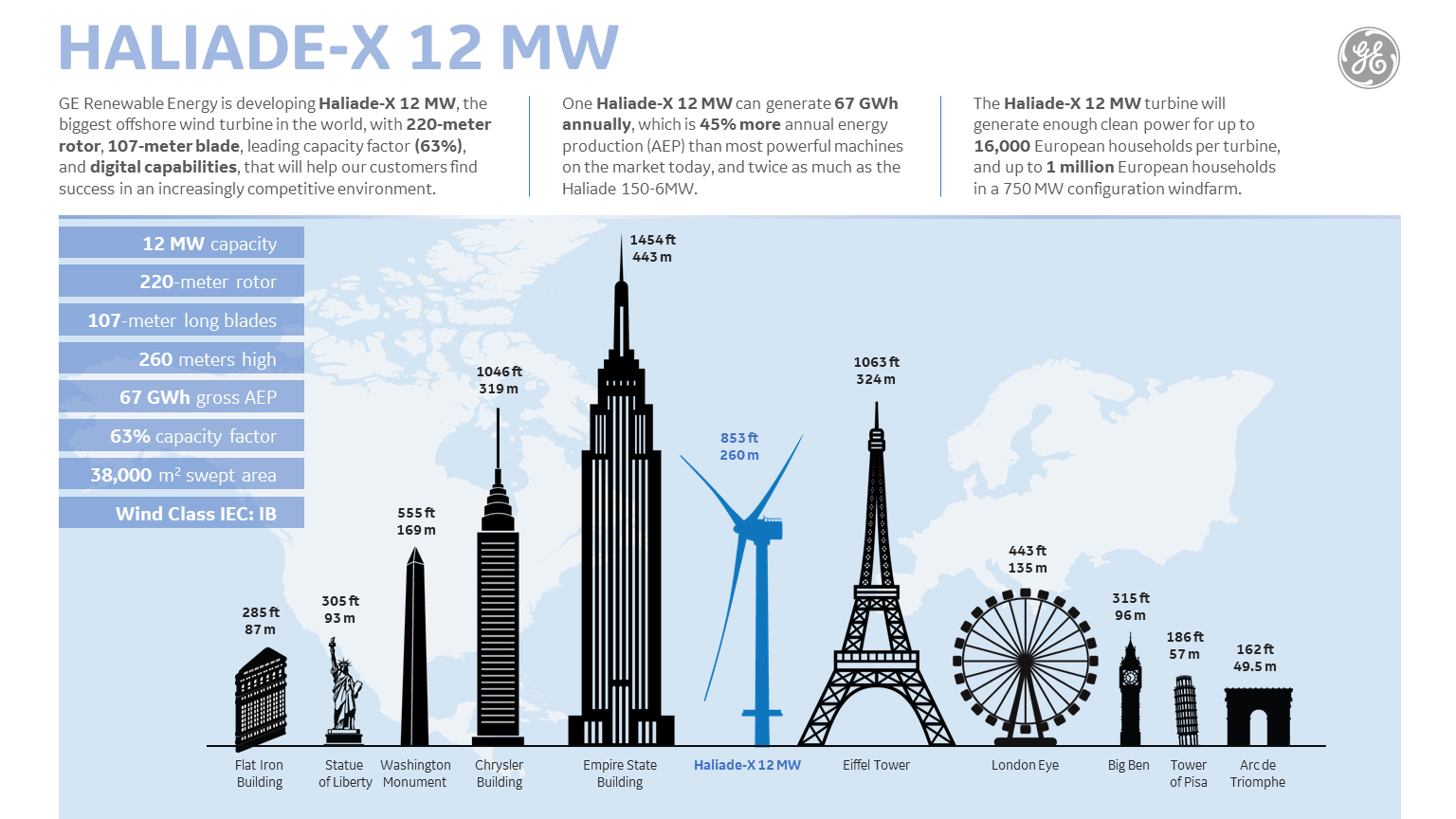 By comparison, MHI Vestas' V164-9.5MW turbine has an expected annual energy production (AEP) level below 48GWh even in wind speeds of 10.5m/s, according to the manufacturer's website.

The Haliade-X 12MW will have a nameplate rating 2.5MW above the V164-9.5MW's, currently the largest capacity offshore wind turbine on the market.

The direct-drive turbine will tower 260 metres over the ocean, making it more than five times the height of the Arc de Triomphe in Paris. It will have a 220-metre rotor and 107-metre blades.

The blades will be built by LM Wind Power, acquired by GE in 2016, at its new factory in Cherbourg, France, due to open in June.

The Haliade-X will be able to operate in wind speeds ranging from 3.5m/s to 28m/s, said GE.

The Haliade-X will provide savings of an average of $26 million per 100MW when compared with GE's current Haliade 150-6MW, based on wind conditions at a typical German North Sea site, according to GE officials.

They also said the advantages of their giant turbines include lower capital expenditure for balance of plant, faster installation and what they said would be simplified operation and maintenance.

GE aims to supply its first nacelle for demonstration in 2019. A site for prototype testing will be selected by mid-2018. Three are being considered.

The nacelle will first be tested in GE's factory in Saint-Nazaire, France. 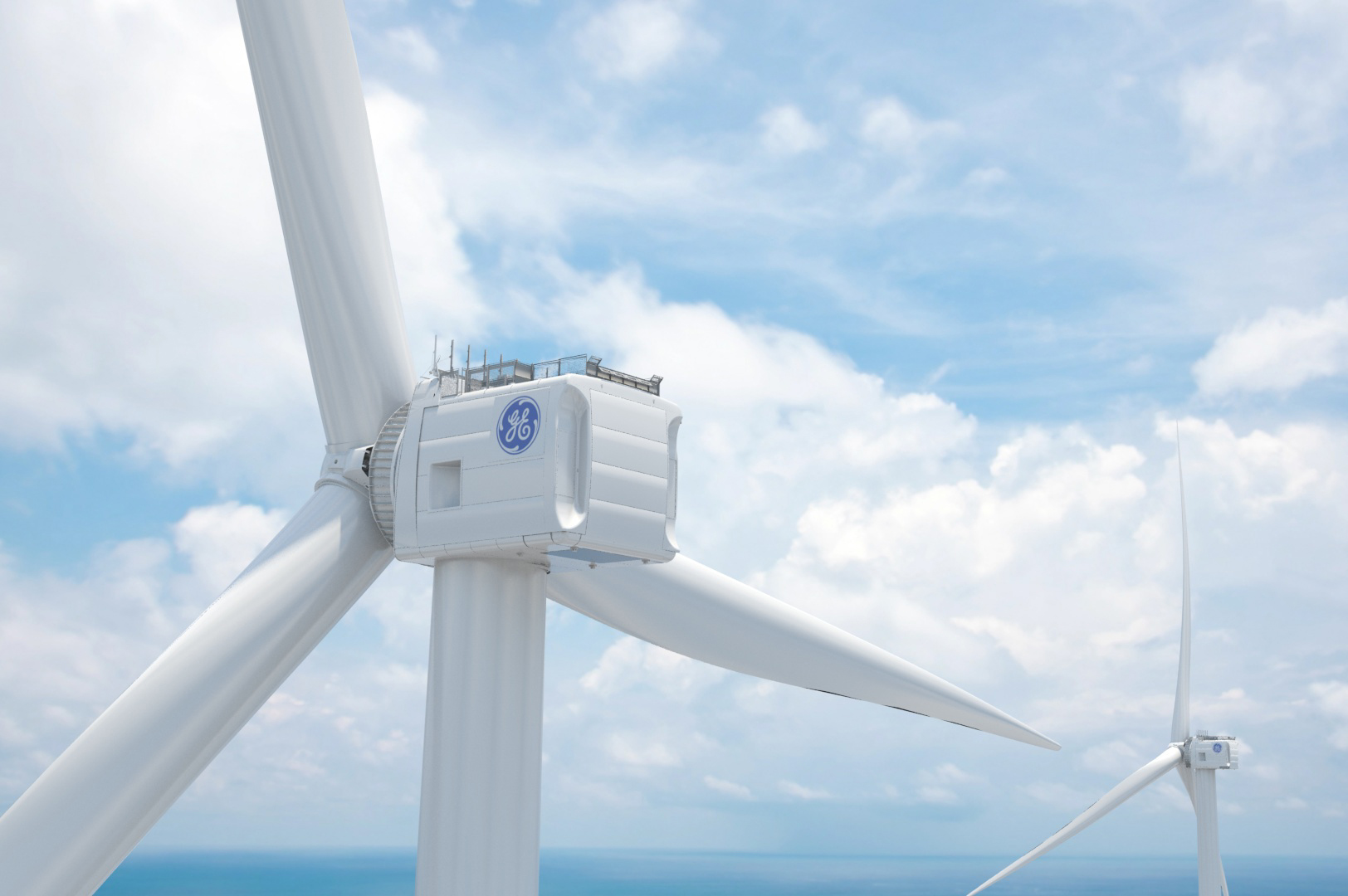 GE's ambitious jump from 6MW to a 12MW machine, when most of the industry is focusing on the 8-10MW range, was "not something to be done by the faint of heart", Lavelle said.

He added: "We didn't want to be a 'me too', to be candid. You really want to differentiate yourself.

"You want to stretch the technology as far as we can within your comfort zone of what's practical. Developing 12MW technology, leveraging your experience on this [turbine], is something that very few companies can do... This is something that GE can do."

Lavelle conceded that the timetable – with commercial shipping in 2021 – is "aggressive".

The prototype components will be shipped in the first half of 2019, and GE expects to have its test certificates in early 2020 before serial production starts.

He said that GE started to develop the Haliade-X's supply chain 18 months ago, and in that a "high percentage" of suppliers for GE's vast onshore fleet are already used for its current offshore offering, a "synergy" that will continue.

"We have a healthy supply chain that will grow with us," he said.

It follows that larger components or larger turbines will need larger infrastructure or logistical tools to help transport them.

Lavelle was not worried about the potential bottlenecks in accommodating the scale of the turbine, such as in ports, and ships and trucks. He claimed GE's suppliers would innovate if needed.

On when the 12MW machine could be deployed in the US market, Lavelle noted the current leasing and plans off Massachusetts, New York and Maryland.

He said: "They're in that window or a little bit later. We'd love to get involved [in the US market] right off the bat."

GE's 6MW turbines were used at the 30MW Block Island project, the US's only offshore project to-date and the first in the Americas.

The conglomerate sees offshore wind as the fastest growing renewable segment, with an average future growth of 8GW-plus a year. "So we want to participate," said Lavelle.

Jérôme Pécresse, president and CEO of GE Renewable Energy said "lower cost of electricity from scale and technology" had helped the acceleration of wind power installation.

He added: "The Haliade-X shows GE's commitment to the offshore wind segment and will set a new benchmark for cost of electricity, thus driving more offshore growth.