ZF Wind Power is a major global gearbox supplier with an installed base of more than 110GW for onshore and offshore applications.

It set up its Indian facility in a special economic zone in Coimbatore, Tamil Nadu in 2006. Today, the Indian plant supplies high-speed three-stage gearboxes to leading local turbine suppliers and export markets.

A speciality since 2009 is increasing design-depth on gearboxes with one planetary and two parallel stages for locally made 2MW-class turbines.

The 2MW rating is also the backbone for the export product portfolio, but gearbox manufacturing and bench-testing facilities have now been upgraded up to 3MW.

"The products that leave this facility fully meet European quality standards, and our philosophy is: ‘what goes should not come back’," says Deepak Pohekar, ZF’s general manager at Coimbatore.

The overall plant layout and in-house processes, such as manufacturing, quality assurance and assembly, closely resemble those at the company’s original gearbox plant in Lommel, Belgium, which became operational in 2004/5, Pohekar explains.

Before the Coimbatore plant started production, 140 Indian staff went to Belgium for up to a year for on-the-job training.

"Besides acquiring technical product and process-related know-how, an additional training focus was building awareness on quality and cost concepts, and in creating a safety culture.

"We continuously invest in staff training and skills upgrading. Most of our technical staff enter with a three-year diploma course and receive three to six months’ in-house training before taking up their role in the factory.

"We encouraged some long-time employees with hands-on experience to go for an engineering degree to promote them as engineers, and with a good success rate."

At Coimbatore, unprocessed third-party spherical and grey cast-iron parts, and raw materials for shafts and gears enter the facility in what is called the "dirty" area.

Materials increasingly originate from the expanding local supply chain and are received, cleaned, and stored if needed, before being made into ready components such as gears and shafts, gearbox housings and covers.

These are all carefully laid-out process steps taking place in a temperature-controlled factory space.

Cleanliness standards are increasingly stepped up when moving on to more advanced processes — from gear cutting to grinding and finishing.

The highest degrees of cleanliness are demanded during precision tasks, such as fitting bearings at shafts and final gearbox assembly. 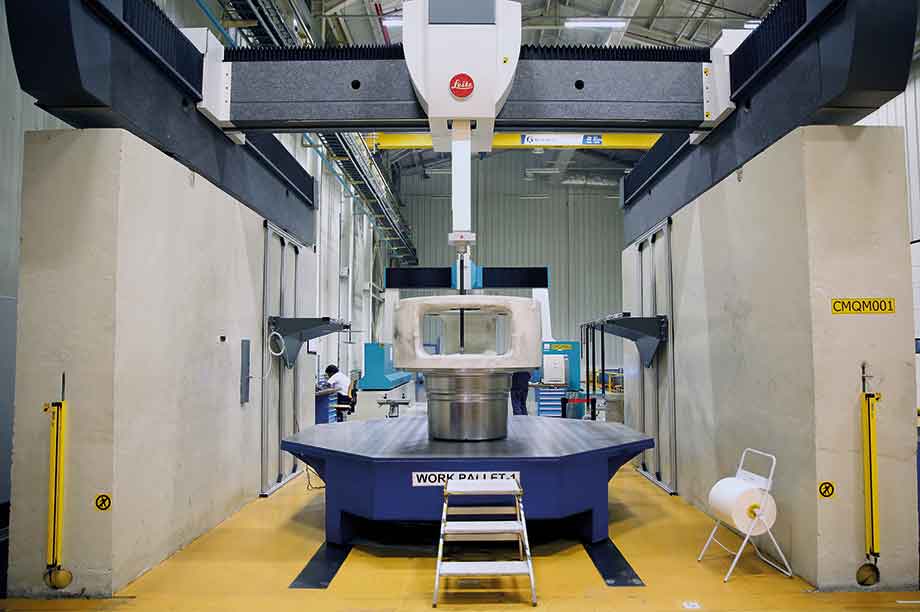 Main functions and performance testing is carried out at one of three in-house test benches, arranged back to back to allow two gearboxes to be tested simultaneously.

Order intake in the Indian market seriously dipped last year as the country moved to a new auction system, but volumes have picked up again.

"I am generally optimistic about the future of wind power in India, and it is encouraging that the government supports plans focused on renewables," Pohekar says.

"Offshore wind will become a game changer, with an aim to have 1GW operational by 2020. Right from the start, India will focus on 6-8MW-plus turbines and skip the 2-4MW class. We at ZF are fully prepared to do our bit in meeting this next challenge."

"An essential element of our modular Shift gearbox platform is keeping most outer dimensions and sizes of internal parts of a given platform identical.

"Built-in flexibility for input torque rating is created by varying the planet numbers, especially in the low-speed planetary stage, currently between three and four, and offer variation in gear widths," he explains.

This essential Shift strategy element enables ZF gearbox clients to introduce a turbine platform with a given power rating and rated input torque, and step up the rating and/or rotor diameter during the product lifecycle.

According to Knops, the Shift concept enables mechanical torque increases up to 40%, while covering a broad range of gear ratios and matching gearbox-generator combinations with unchanged gearbox outer dimensions and (often) without altering nacelle dimensions.

In fact, the latter has already become a rather common wind industry strategy pursued by several leading turbine suppliers, including, for instance, the Vestas 2MW and 3-4MW platforms.

Another challenge is meeting continuous market pressures to further drive down hardware unit costs per kilonewton metre (kNm), and, ultimately, the levelised cost of energy (LCOE).

"Among the main benefits of gearbox modularisation, both for ZF and the industry, are a reduction in development costs and time to market.

"Plus a given product platform could potentially serve multiple clients," says Knops.

"However, further standardisation in interfaces such as the main shaft and main carrier of a gearbox, despite the clear benefits for the entire industry, still has a long way to go."

The flexibility of Shift technology could, in his view, add value for future auction systems, as such projects typically show considerable uncertainty on their exact product specification demands.

The first-generation Shift platform covers a torque range of 2,100-3,000kNm and is already commercially available.

The second Shift platform, covering 3,500-4,900kNm, is in development, with the first prototypes due in the second quarter of this year.

"When we developed the first two Shift platforms, all known onshore turbines, including those in development at that time, could fit in.

But when the latest and largest low-wind models, including the GE 4.8-158, were introduced, they did initially not fit in platform 2.

We are now considering to either expand the platform 2 torque range or add a new platform 3 with enough room for possibly even higher future input torque demands," Knops explains.

A current hot topic in the wind industry is the future of 12-15MW-class offshore turbines with a commercial availability deadline by 2023/4.

Knops strongly believes that independent of drivetrain preferences, no intermediate rating steps should be made towards 15MW, because the main issue is not turbine technology scaling but developing a new logistics chain.

"What will be necessary is a switch from four to five or more planet gears in the first gear stage," he says.

A medium-speed gearbox suitable for a 15MW-class turbine can be developed based on proven technology, according to Knops, and any technology-related bottlenecks lie elsewhere.

"However, technology readiness represents only one side of the coin," he cautions.

"Some questions I have for potential customers of these turbines are: ‘who will pay an estimated €300 million for product development, and what happens if these envisaged 15MW turbines are not ready and bankable by 2025?’

"These parties could alternatively perhaps decide on a more relaxed strategy, considering there is still lots of improvement potential with existing turbine platforms through systematically introducing and implementing multiple smaller optimising steps."

Founded in 1915, ZF Friedrichshafen is a world-leading supplier to the automotive industry and other industrial sectors.

The German company entered the wind business in 2007 as an independent service provider, and built its first automotive-type gearbox plant dedicated to 2MW gearboxes for Vestas turbines in Gainesville, Florida, US in 2011.

ZF Wind power expanded further through the acquisition of Belgian gearbox supplier Hansen Transmissions in the same year, and the incorporation of the large gearbox segment of Germany’s Bosch Rexroth in 2015.

It has facilities in Belgium, Germany, China, India and the US, with a shared focus on manufacturing depth and processes and on keeping all critical processes in-house.

Cumulative output in 2017 amounted to 17.7GW, split roughly into about 8GW produced in Europe, 4GW in China and India each, and 2MW in the US.

ZF’s product portfolio encompasses common three-stage high-speed customised solutions with a single or two planetary stages for both three-point and four-point gearbox support, and semi-integrated high-speed gearbox designs such as that incorporated in the Vestas V90-3.0 MW.

This gearbox design is characterised by flange connections to other main components and a massive 9.5MNm rated input torque.

More than 110GW has now been installed onshore, more than 10% of this in the top 3MW segment, plus over 3GW operating offshore.