If the UK’s regulatory regime is upgraded to allow for the growth in deployment of storage technologies, battery storage deployment could grow 200-fold in the five years to 2021 — from the 2016 capacity of 60MW to 12GW — the Renewable Energy Association (REA) said in its report.

Globally, falling costs and improving technology means that energy storage does not need to be subsidised, the REA and co-authors, the All Party Parliamentary Group (APPG) on energy storage, a bipartisan focus group, concluded.

But to reach the high scenario of 12GW deployed nationwide by 2021, the UK’s capacity market would need to be reformed and the cost of batteries would need to fall rapidly "in line with Bloomberg New Energy Finance predictions", the authors noted.

"Coherent industry standards" for installation and storage use would also need to be implemented.

In an optimistic high deployment scenario, 3GW of energy storage could be used at wind projects by 2021 — in an arrangement like that found at Vattenfall’s 228MW Pen y Cymoedd site in Wales. 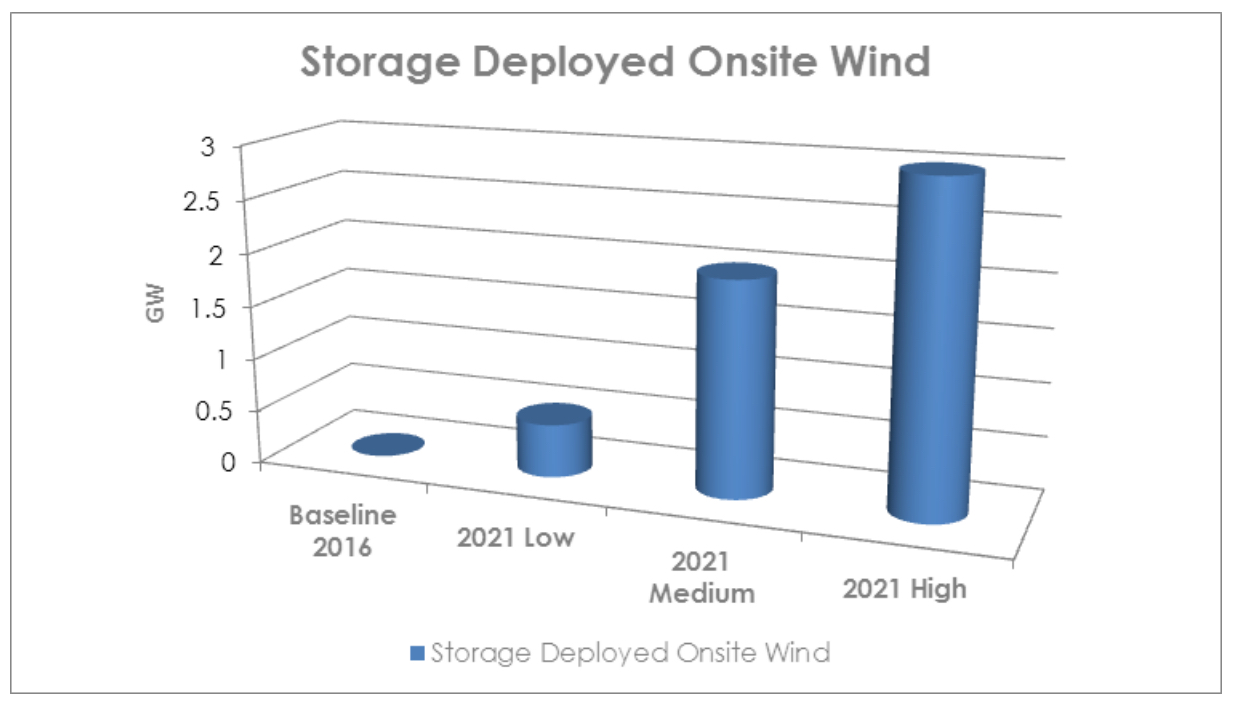 The UK-wide figure of 3GW at wind farms would be less than the 5GW projected for solar farms.

The report, 'Batteries, Exports and Energy Security', was published a day after plans were approved for a 49.9MW solar-plus-storage project on the Welsh island of Anglesey.

A report by the UK government’s National Infrastructure Commission, which was cited in the REA-APPG study, indicated consumer savings of £8 billion (€9.07 billion) a year by 2030 from 4GW of new interconnection, demand flexibility and storage capacity.

"A combination of technological innovation, government support, and global supply chains have driven down costs of technologies such as wind and solar to the extent that they are now the cheapest source of new power production available today," REA CEO Nina Skorupska said.

"A similar story is now emerging with battery storage. What’s needed now is policy reform in the UK to allow these technologies to be deployed, which will in turn support the government’s aims of decarbonisation, reducing energy bills, and increasing energy security," Skorupska added.

Peter Aldous, who chairs the APPG on energy storage, added: "It is policy, not technology, that is overwhelmingly the most major obstacle to rapid and widespread deployment of battery storage systems.

"The industry is facing a plethora of regulations, most of them vestiges from a past age in energy, that need to be amended and upgraded, each of which is moving at a different speed towards implementation."

The REA and APPG on energy storage also recommended policy changes were needed to reach 12GW by 2021.

These included the introduction of a definition for ‘energy storage’ as quickly as possible, to overcome the "problem of there being definitions for ‘generation’ and ‘demand’", and moving from Distribution Network Operator (DNOs) to more regionalised Distribution System Operator (DSO) models to enable the procurement of flexible services such as storage.