When French oil giant Total bought a 23% stake in developer EREN Renewable Energy in September, it marked the latest step along a path to investing 20% of its assets in low-carbon business ventures by 2035. Norway's Statoil has emerged as a significant player in the offshore-wind sector, and has jump-started the market for floating foundations with its 30MW Hywind demonstration project in Scotland. By 2030, Statoil expects to allocate 15-20% of its annual capital spending to "new-energy" investments.

Royal Dutch Shell surprised many industry observers late last year when a Shell-led consortium beat Dong Energy in a tender for the 680MW Borssele 3 & 4 zone in the Dutch North Sea. Shell's New Energies division, created in 2016, will spend up to $1 billion a year by 2020 to explore opportunities in renewables and biofuels. Italy's Eni signed an agreement with GE in 2016 to jointly develop large-scale power-generation projects from renewable-energy sources. 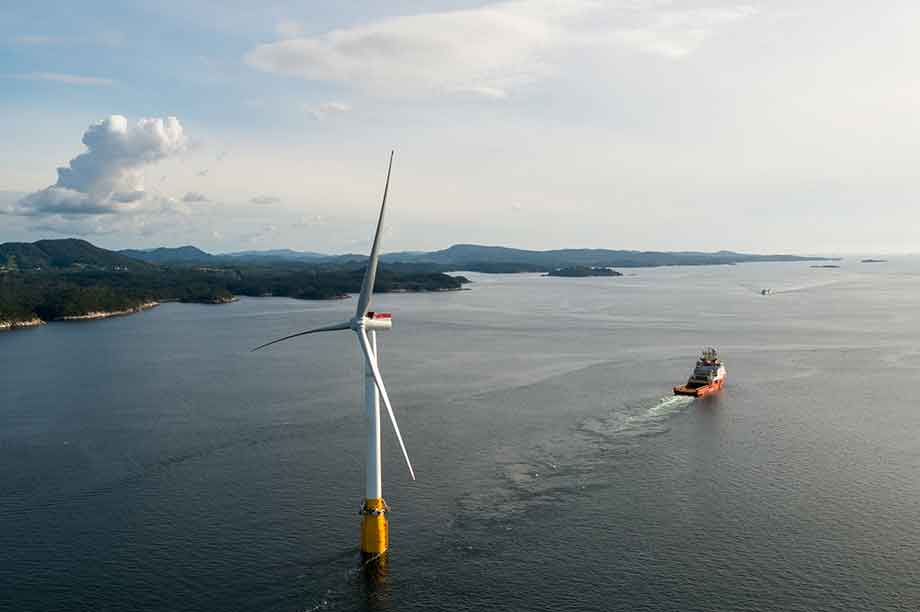 Statoil has taken a lead in floating offshore wind, but expects oil and gas to still account for 80% of investments up to 2030

"The oil majors are clearly thinking very seriously about renewables. It wasn't quite the case if you wind the clock back two years," says Tom Ellacott, senior vice-president of corporate research at Wood Mackenzie, a consulting firm that has been analysing the oil and gas sector since the early 1970s.

Go back even further, and the interest the world's biggest oil and gas players are now showing in wind and other renewable-energy resources starts to look a little familiar.

In 2000, BP tried to rebrand itself as "Beyond Petroleum" before eventually retreating from its renewable-energy investments, hanging on to about 2.3GW of US wind capacity for which it failed to find a suitable buyer. Shell's recent entry into offshore wind is actually its return. In May 2008 it announced it was leaving the consortium building the London Array to focus on its core fossil-fuels business. In 2014, US-based Chevron dismantled its renewable-power group after just a year of operations.

Despite their half-hearted flirtations with renewable energy in the past, Ellacott believes the oil majors are paying more than just lip service to the sector this time. "I do think it is different this time," he says.

Underpinning that difference is a recognition that the shift to a low-carbon energy future is under way, even if the pace of change remains unclear. While the world used to worry about peak oil supply, the conversation has shifted to peak demand. DNV GL's recent Energy Transition Outlook forecasts that demand for oil will hit its high point as early as 2022, while the peak for natural gas will come in 2035. Wood Mackenzie sees oil demand continuing to grow out to 2035, although in a scenario where tight constraints are put on carbon, the peak could come before 2030. Bloomberg New Energy Finance's Long-term Electric Vehicles Outlook 2017 predicts the rise of EVs will eliminate demand for eight million barrels of transport fuel per day by 2040, roughly one twelfth of today's global production.

"There is a huge amount of uncertainty. The major oil companies can't afford to ignore their absolutely core legacy operations but, at the same time, they need to start laying a foundation for a transition that is going to pan out over many decades," Ellacott says.

While the oil and gas sector is facing slowing demand growth, it is seeing opportunity in the rapid expansion of wind and solar. "We have an industry with immense growth potential in front of us," Irene Rummelhoff, Statoil's executive vice-president of new energy solutions, said during June's Offshore Wind Energy 2017.

Wind and solar investments also present an increasingly appealing value proposition as their costs drop and oil prices struggle to top $60 a barrel. While the best oil and gas projects can earn returns twice what renewable energy investments typically realise, the all-in returns for wind and solar "aren't materially lower" than the average earnings of full-cycle upstream exploration, according to a Wood Mackenzie analysis.

The long-life cash flow from wind and solar projects is an added attraction. "They give you a nice stable income stream, which is quite a nice thing to have when you're a big dividend payer," says Ellacott.

Still, the oil and gas majors are far from ready to take a wholesale leap into renewable energy. The $1 billion a year Shell's has earmarked for renewable-energy development is a fraction of its $25-30 billion in annual capital spending. A month before Total spent €237.5 million ($276 million) on its stake in Eren, it closed a $7.5 billion buyout of Denmark's Maersk Oil & Gas. For many of the majors, as a November 2016 report from BMI Research bluntly put it, their total investment into green tech and clean-energy projects is "negligible" in comparison with total capital expenditure.

The moves they have made so far are best described as baby steps, acknowledges Ellacott, and big changes will not happen overnight. "You are not going to see them switching off oil and gas and piling into renewables," he says. "The exploration and production business is really what these guys are all about, and that is where the majority of their capital is going to be invested.

"But I think over the next 15-20 years you are going to see increasing amounts of that capital being reallocated into renewables. When you get to 2040, wind and solar, and possibly other forms of generation, are likely to be a more important component of the overall business mix."

When it comes to repositioning their businesses, diversifying into wind and solar is only part of the plan. Gas is seen as a bridging fuel to a low-carbon future, and all the oil majors are actively pursuing opportunities.

Total, for example, wants 60% of its production to be natural gas by 2035, and it has some work ahead of it to achieve that target. In fact, the realigning of priorities to become gas and oil, rather than oil and gas, companies is likely to be the biggest strategic shift now under way. DNV GL's Energy Transition Outlook helps illustrate the reason why. It predicts oil and gas will still account for 44% of global primary energy supply in 2050, compared with 53% today, with gas the biggest single source of energy supply (see chart).

"It will still be a very substantial business, a bit smaller than it is now, but not tiny," says Paul Gardner, the lead author of the renewables section of DNV GL's report. "The rate of reduction in the use of gas and oil, by our forecast, is actually fairly gradual. So they're not seeing a cliff edge."

Another key strategic trend has been a shift towards shorter-cycle oil and gas projects at the lower end of the cost curve. This partly explains why the European majors have made some very public moves into wind and other clean technologies and have been quite vocal in articulating their long-term strategies, while US-based ExxonMobil and Chevron, with big positions in low-cost shale oil, have largely been quiet.

"If you're Exxon or Chevron, you're long on tight oil in the Permian basin, which is a huge resource base that's very economically attractive," says Ellacott. "So they are quite well-positioned, certainly out to 2025 and possibly a bit beyond that in the oil sector."

While renewable-energy investment has run the gamut from wind to solar and batteries, it is the offshore-wind sector that gives the oil majors an opportunity, as Statoil's Rummelhoff puts it, to "play on some of our strengths".

Offshore wind may be the most attractive route to growth, agrees Ellacott. "There's quite a big component of trying to utilise existing synergies with your oil and gas business, and that's one of the reason companies are favouring offshore wind at the moment. There's also a scale component with offshore wind. It is really starting to scale up to a size that competes with pretty decent oil and gas projects. It's much harder to do that with onshore wind and solar."

In fact, one of the challenges the oil majors face in moving into the renewable-energy space is building scale. Wood Mackenzie's analysis estimates the world's seven biggest oil producers would have to invest $350 billion by 2035 to replicate the 12% market share they now hold in oil and gas. Even then, it would lift renewable energy to just 6.5% of their overall production. And while investors want to see concrete strategies for reducing carbon, says Ellacott, they are wary of investing too much in new technologies too quickly.

"When oil and gas companies are thinking about how much capital they should be allocating to renewables in the near term, they do need to take into account how the investor community would respond," he explains. "It is a big step away from their core competency."

The wild card in the discussion is how carbon policy will unfold. The Paris Agreement aims to limit the global temperature rise this century to less than 2ºC, but the path to achieve this has not yet been set.

"One of the fundamental outputs of our report is that if you just model the world making economically rational decisions, we reach 2.5ºC by the end of the century. I would be astonished if the population of the world felt that was acceptable," says DNV GL's Gardner. "You could take our model as saying this is a future that won't happen. Something else has to happen, which is driven by politics. That is something we haven't modelled."

Carbon, and the potential for disruptive technology change, are part of the uncertainty the oil majors are currently navigating. "There might well be a scenario where they have to reinvent themselves much more quickly than we anticipate, which would require large investments," says Ellacott. "They do have the financial capacity, if things did change really quickly, to allocate more of their capital to the renewables sector. It still feels difficult to see a scenario where by 2020 they are all going to be getting into renewables in a really big way. It's more beyond the 2030 period where things really start to change."

Vestas ‘fully focused’ on return to profit after heavy 2022 loss