A 22MW energy storage facility is now being built for the site and is due to start providing enhanced frequency response service to the UK’s grid network next February.

It will be able to respond to power fluctuations on the grid within a second, whether frequency drops or rises, according to Frank Elsworth, Vattenfall’s project manager for the energy storage component at PyC.

The 22MW system is designed to keep the grid system at a frequency of 50Hz — 100% active power output — at one second (or less) of registering a deviation in frequency.

It is believed to be the largest co-located battery and wind farm project in the UK, and is one of two projects in south Wales at which Vattenfall is linking up energy solutions.

The developer also owns the 4.99MW solar array at the 8.4MW Parc Cynog wind far in Camarthenshire, south Wales. The solar panels surrounds one of its 11 turbines, a mix of Micon 750kW units installed in 2001, and Enercon turbines in 2009.

Wind and solar PV make good partners in this part of the country, wind speeds rising in the winter when there are fewer daylit hours. But sharing the infrastructure, from grid connection to access tracks, at either the wind-battery or the wind-solar site helps drive down costs.

"We are leveraged with grid connection, and sharing that cuts down on Capex and it becomes more cost-effective," said Vattenfall vice president Gunnar Groebler.

"Whether we offer enhanced frequency response, like we do here, or just as back-up, there is also much more flexibility around the business case with batteries," he said.

"In hindsight, we should have also had a solar part of every wind farm in the past ten years," PyC project manager Stephen Holdroyd added.

He added that issues such as shadow flicker affect where solar panels are best-placed in relation to turbines — "not between every turbine" and "to the south of turbines" — but that designing a hybrid or co-location site is not materially different to a single-use site.

"Siting is the most difficult aspect of any renewable scheme, just from the visual impact on the landscape and availability of grid. Whether it’s a hybrid project or just a wind farm, that doesn’t change." 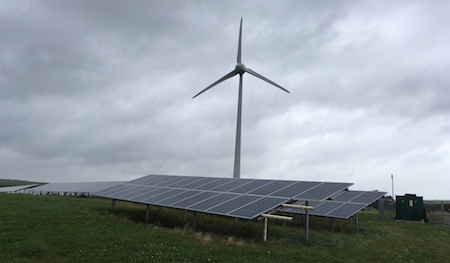 Separate operations and maintenance (O&M) teams are currently employed for wind and solar work at Parc Cynog (above). Grupotec engineers are contracted to maintain the solar panels for the first two years of operation, while training their Vattenfall counterparts.

The challenge of providing greater grid stability during periods when it is "fairly windy and also quite sunny", initially posed a problem, said Holdroyd. But the installation of a power plant controller — to curtail power when output approaches maximum levels — provided a solution, he added. 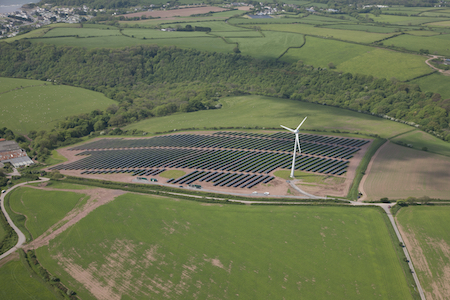 Between the co-location project at Parc Cynog and the wind-battery hybrid at Pen y Cymoedd, Vattenfall aims to develop a business case for making renewable technologies work together as cost-effective, commercial ventures.

Vattenfall’s Dutch subsidiary Nuon is planning solar arrays at its 400MW Wieringermeer and 18MW Haringvliet in the Netherlands, both of which are due to come online in 2019.

Asked whether the developer is looking at more integrated options in its portfolio, Groebler said: "Absolutely. We are, for sure, going to continue with hybrids, not just in the UK, but with projects in the Netherlands too."

Holdroyd summed up the experience with PyC and Park Cynog: "It’s been a very steep, almost vertical, learning curve, but I think we’re going to be better prepared for any process next time."