Wind could provide up to 30% of the continent's power demands by 2030, according to projections released by WindEurope in its Scenarios for 2030 report.

Denmark, Ireland, Estonia and the Netherlands could have more than half of their power demand met by wind under this outlook. 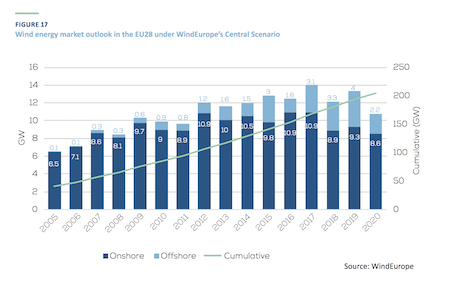 In its Outlook to 2020, also released today, the industry body predicted that more than 50GW could be installed by 2020 (including capacity already installed this year), bringing the EU’s total installed capacity to 204GW.

For this to happen around €90 billion worth of investment and "ambitious" policies would be needed, WindEurope added.

Offshore growth would outpace onshore development, reaching 25% of the total installed capacity by 2020, WindEurope added, with this acceleration being driven by the UK, where 5.2GW was expected to be installed.

Overall, Germany would still have the highest overall wind capacity despite a slow-down in planned activity towards the end of the four-year period.

Meanwhile France would leapfrog Spain and the UK into second place due to new government policies.

Despite the positive outlook until 2030, the Scenarios for 2030 report warned that "policy uncertainty and lack of ambition for the post-2020 climate and energy framework" could lead to installations coming in below estimates.

Only five of the 28 EU members had provided "visibility of regulatory certainty", the report added.

With "no positive improvements from current legislation" the outlook for Europe’s cumulative installed capacity would be downgraded to 195GW under WindEurope’s ‘Low Scenario’.

Alternatively, with improved national policies for permitting and planning in place and increased auction volumes, 217GW could be installed under WindEurope's 'High Scenario'. 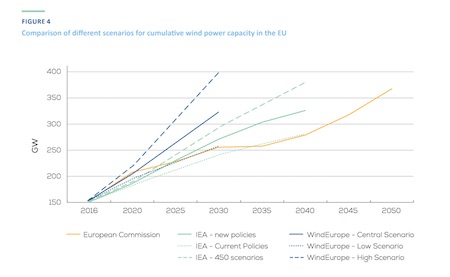 Reaching 204GW by 2020 and 323GW by 2030, however, would require the "right policies", WindEurope added. Without these, and with no binding templates agreed for National Energy and Climate Plans, a failure to deliver the EU-wide 27% RES target, persistent overcapacity and grid connection issues, Europe could have 256GW total installed capacity under WindEurope's 'Low Scenario'.

Alternatively, with an increased EU-wide RES target of 35% by 2030, a developed transmission network, and favourable national policies for permitting and planning in place, Europe could have 397GW installed by 2030, under the 'High Scenario'.

Reaching the 323GW mark would also require the repowering or life-extension of roughly half of the EU’s existing wind capacity due to reach the end of its operational life before 2030. WindEurope analyst Aloys Nghiem said this was because most of the turbines installed in the first decade of the 21st century had lifespans of around 20 years, and so were likely to cease operation betwen 2020 and 2030.

Mr Nghiem also called for auctions to have greater visibility, being announced three years in advance. This would "enable the industry and investors to have the confidence to build factories and enable faster cost reductions", he added.

WindEurope CEO, Giles Dickson, added: "Wind energy is now firmly established as the cheapest form of new power generation, but the outlook from 2020 is uncertain.

"The industry needs binding and ambitious National Energy & Climate Action Plans that provide clarity on post-2020 volumes, which will allow cost reductions to continue. This requires a good outcome on the EU Clean Energy Package.

"With an ambitious European renewables target of at least 35% by 2030, the wind industry could deliver even bigger volumes at competitive cost."