The 11-turbine Vindeby site was installed near Lolland in the south east of Denmark in 1991 as a demonstration project to prove whether it was possible to generate wind power offshore.

After more than 25 years of operation, however, its turbines were worn down, owners Dong Energy said, and the company decided to decommission the project.

Contractors started dismantling the wind farm in March of this year, and have now finished decommissioning.

The project’s parts will be used in research projects, reused "as much as possible", Dong said, while one turbine will be displayed at an exhibition at the Danish Museum of Energy in Bjerringbro in Jutland.

Workers dismantled the project when weather permitted offshore work — sometimes in water depths of only two-to-five metres, meaning only a small number of boats were able to access the project, Dong said.

Vindeby’s blades, nacelles and turbine towers were taken apart and removed individually by a mobile crane and placed on board a jack-up vessel.

Its concrete foundations were broken down on-site, mainly by hydraulic demolition sheers and a hydraulic hammer, but also with milling tools. The broken-down concrete and reinforcement structures have subsequently been collected. 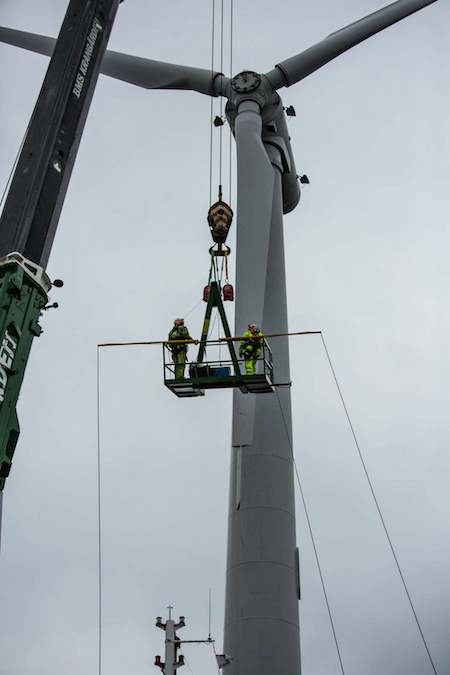 All turbine and foundation components have now been shipped to shore in Nyborg Harbour.

Some of the blades will be used as part of a research project at DTU Riso, Denmark’s National Laboratory for Sustainable Energy.

When decommissioning started in March, Winther said: "Vindeby Offshore Wind Farm has played a decisive role in scaling up the technology and reducing the costs to a level that makes offshore wind attractive to many countries facing replacement of end-of-life coal-fired power plants with new green energy sources."

Vindeby generated 243GWh of power during its operation — approximately what seven of the largest offshore wind turbines today can generate in a single year, or what Dong’s 1.2GW Hornsea One site will generate in 17 days.