The newest version in the Nordex Group’s Generation Delta series is another evolution and upscaling of the 3MW platform introduced in 2013.

"A prototype is planned for Q3-2018, followed by several pre-series turbines and series production ramp up in 2019," said Nordex head of product strategy Paris Lappas.

According to Lappas, the N149/4.0-4.5 stands out against increasing competition in its capability to meet a wide range of site-specific requirements with a single hardware model.

"Because turbine maximum output can be varied between 4.0MW and 4.5MW, it is ideal for adapting individual installations to specific grid operator’s requirements, and to local wind conditions or noise restraints," he said.

"The turbines could generate up to 4.5MW, by letting them spin faster with corresponding higher tip speeds. This in turn is a function of aerodynamic sound level, but without any extra impact on drivetrain loading and still not exceeding 106.1dB(A)," Lappas added.

Another control option is yield optimising at project level through variation in individual turbine maximum output settings relative to their position in the wind farm.

This can be particularly useful for large-scale wind projects characterised by different internal wind conditions and complex topography.

"Most important is that each alternative option, under any possible circumstances, should fully match customer requirements, including, a choice between 20-year or 25-year operating life," Lappas explained.

The N149/4.0-4.5 is designed for a 20-year operating lifetime, which can be extended to 25 years, depending on local turbine or site conditions and their associated loads spectrum, Lappas said.

At sites with stringent noise-restriction legislation requirements, turbine operation can be tailored with a choice of sound-optimising modes.

These can be individually controlled and fine-tuned relative to wind direction, time of day, ambient temperatures and for specific noise-reducing circumstances like public holidays.

It retains a high-speed solution with three-point gearbox support and a doubly fed induction generator (DFIG).

For all current 2MW-class Gamma and 3MW-class Delta turbine models, the frequency converter and MV-transformer are both located in the tower base.

However, retaining 660V generator voltage and feeding AC-power at this voltage level down the tower in the Delta4000 models would have led to considerable power transport loss, Scholle explained.

Another benefit of moving the complete electric power conversion system up-tower is that it allows full nacelle pre-commission inside the factory before shipment to construction sites.

"We therefore decided to move the new uprated converter and MV-transformer electrical system into the rear of the nacelle, also a proven solution successfully deployed in our 2.3MW N90/2300 offshore turbine back in 2002.

"The main reasons for this are a combination of increased power rating and an ongoing trend towards ever higher towers, meaning longer cables," he said. 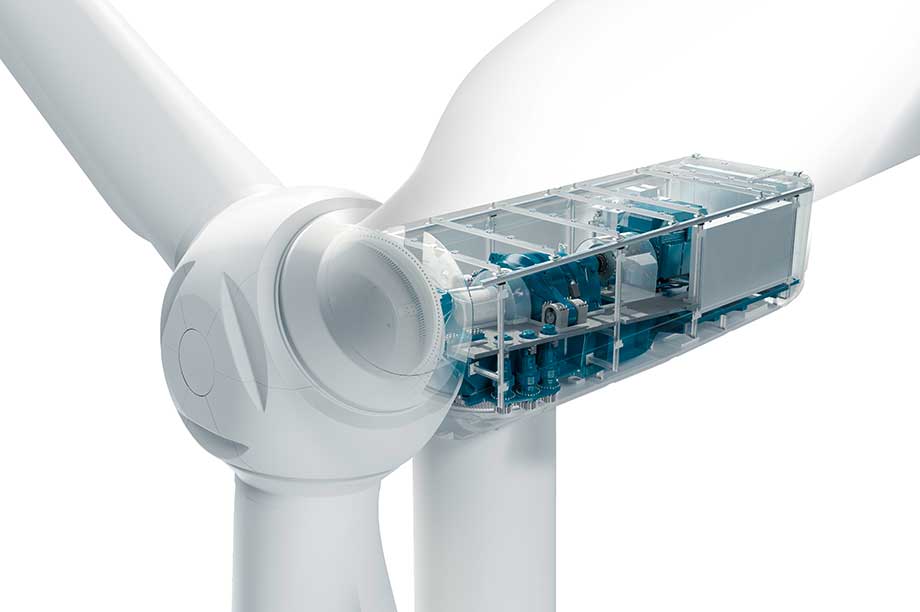 Relocation… The frequency converter and MV transformer for the N149/4.0-4.5 are located at the rear of the nacelle rather than in the tower base as with current Generation Gamma and Delta 2MW and 3MW class turbines

A major in-house switch to slender, lightweight blades with flat-back aerofoils and incorporating carbon in the main structural reinforcement beams (girders) was made in late 2011, when Nordex introduced the N117/2400.

This lightweight blade design approach continued with the single-piece NR74.5 blades of the N149/4.0-4.5.

Nordex retained the same blade structure while optimising the design for manufacture and road transportation and production, benefitting from the expertise of Danish blade-technology developer SSP, which the Nordex Group acquired earlier this year.

The company switched to SSP’s blade-root solution for the NR74.5 blades, which are 18 metres longer than the NR65.5 blades for the N131 as the traditional "Ikea-type" T-bolts had proved a bottleneck in developing the bigger blades.

Nordex is also reaping the benefits of its merger with Acciona Windpower, completed in April 2016, when it comes to product development.

"In developing the N149/4.0-4.5, we could draw on multiple synergies between the Nordex and Acciona Windpower platforms," Lappas said. "The group will in future use a common supplier-base strategy, which commenced with selecting a single gearbox manufacturer for the N149/4.0-4.5."

"Nordex can further offer project-specific towers and tower heights for large-scale projects. We have also ensured that Acciona Windpower’s full concrete tower concept is fully compatible within the design of the N149," said Scholle.

"Brazil, for instance, is characterised by large-scale projects often build in remote areas, plus the fact that steel is expensive. Building mobile concrete-tower production plants near construction sites makes commercial sense under these specific circumstances."

Further Delta4000 variants for other wind classes and market segments are on the cards, but the group is also planning to offer flexible turbine and tower solutions for all platforms, including the Acciona Windpower’s 3MW series, according to Lappas.