The Dutch manufacturer is testing the climbing and hoisting capabilities of new technology on the highest onshore turbine in the Netherlands, its L136 model, which has a hub height of 166 metres.

It had previously tested the crane "extensively" on the ground.

The crane can be transported by three trucks, installed within a day, and is capable of installing a complete turbine, Lagerwey stated.

Its development could help solve the problem of the long transport and construction times of the cranes traditionally used to build wind turbines, a spokeswoman added. 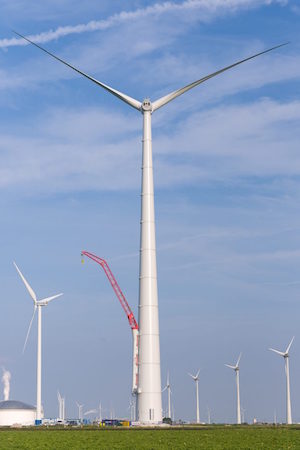 Testing is being carried out in the Port of Eemshaven in Groningen, Netherlands, and is set to last "several weeks", Lagerwey said.

The company plans to use the climbing crane for the construction of the second L136-4.5MW turbine in October.

The first turbine at the 9MW Port of Eemshaven project was installed in June.