Wind power capacity in the country could be ramped up to 185GW — an eight-fold increase over 15 years from 2015 — analysis by the International Renewable Energy Agency (Irena) suggests. This would require $42 billion worth of investment before 2030, Irena added.

Additionally, power generated by renewable sources is expected to increase by 137TWh a year to 595TWh, with wind power making up 345TWh of this.

The 185GW figure is ahead of other forecasts and official targets, however.

In its Indian Wind Energy Outlook 2016 study, the Global Wind Energy Council (GWEC) predicted the country would have somewhere between 111GW and 163GW installed by 2030.

Meanwhile, India’s Ministry of New and Renewable Energy (MNRE) officially announced the government’s target of 175GW installed renewable energy capacity by 2022 — including 60GW from wind — in its 2015-16 annual report.

India is projected to have approximately 32.6GW of wind power installed by 1 September, according to latest figures by Windpower Intelligence, the research and data division of Windpower Monthly.

Irena's 185GW figure, therefore, would be part of an "accelerated uptake of renewable energy beyond the country’s current plans", analysts said in the report, Renewable energy prospects for India. 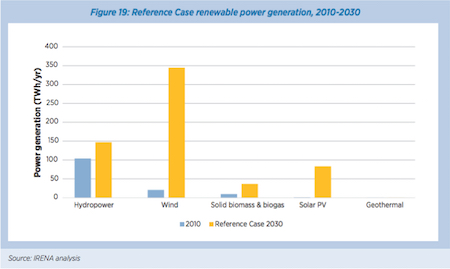 India is the latest country to have its potential for scaling-up renewables scrutinised by IRENA as part of the intergovernmental organisation's REmap programme. It has also analysed countries such as China, Germany, Indonesia, Mexico, Russia and the US.

India’s population is expected to grow from 1.3 billion today to 1.5 billion by 2030, according to the UN.

Additionally, it is estimated that 80 million households — roughly 300 million people — have limited or no access to electricity.

The rapid increase in the uptake of renewables would in part be a response to the necessity of meeting a growing population’s demand for energy and electricity, the IRENA report suggested.

Additionally, the government has previously stated a desire to increase the capacity of individual turbines.

A repowering policy document from the MNRE issued in August last year stated most of India’s turbines installed before the year 2000 are of capacity below 500kW, but were "at sites having high wind energy potential".

The document’s author, JK Jethani, a scientist in the MNRE’s wind energy division, added: "In order to optimally utilise the wind energy resources repowering is required."

Wind’s projected 14% share of renewable energy by 2030 lagged behind biofuels (62%) and solar power (16%), according to Irena's analysis. It would make up a greater proportion of India’s renewables use than hydropower (7%). 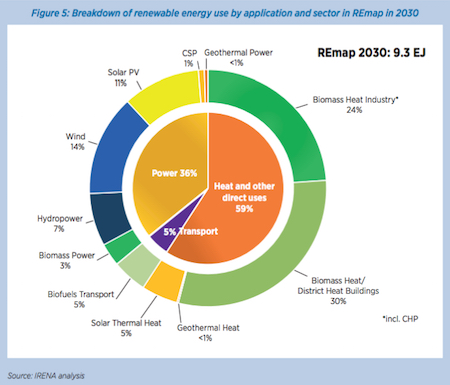 Accordingly, Chalasni described 2017 as a "year of transition" for India’s wind energy market.

However, an MNRE official indicated that the government plans to auction about 6GW of wind capacity this fiscal year, building on the two 1GW auctions in February and July.

"I am sure [technological advancements] will make renewable energy more attractive, particularly for emerging and growing economies like India, especially when renewable energy costs are down as compared to other forms of conventional energy sources," he said.

Following IRENA’s report, the intergovernmental organisation’s director-general Adnan Amin said: "With one of the world's largest and most ambitious renewable energy programmes, India is taking a leading role in the energy transformation both regionally and globally."

The group’s director of innovation and technology Dolf Gielen added India could balance economic growth and development, with protecting the environment and security of energy by deploying more renewable energy.

The group’s analysts claimed increasing renewable energy deployment could save India’s economy 12 times more than its costs by the year 2030. This would also create jobs, reduce carbon dioxide emissions and ensure cleaner air and water, with savings on health-related costs.

Furthermore, increased renewables capacity would lower the demand for coal and oil products by 17-23% by 2030, compared to a business as usual scenario, the report claimed.