In June, the Danish energy ministry announced plans to invest DKK 1.3 billion in a new technology-neutral support scheme, to fund up to 200MW of wind and solar capacity in 2018 and 2019.

Denmark's current subsidy programme expires in February 2018, and the industry has long been calling for a new system to be in place as quickly as possible.

Lars Lilleholt, the country's energy minister, said the scheme would be the first time producers compete together to determine the price of renewables in Denmark.

However, DWIA believes that a change in the system could yield a greater return at lower prices.

The Danish government's model would involve a fixed feed-in premium, which DWIA predicts at roughly DKK 0.13/kWh (€0.017/kWh), over a 20-year contract.

The government prefers this option as the risk is transferred to the project owners should electricity prices increase.

DWIA's model is based on the German and UK contracts for difference (CfD) model, where project owners receive a top up to the market price, and the risk is shared between project owners and the government.

The reduced risk would encourage developers to lower their bids, DWIA argued. 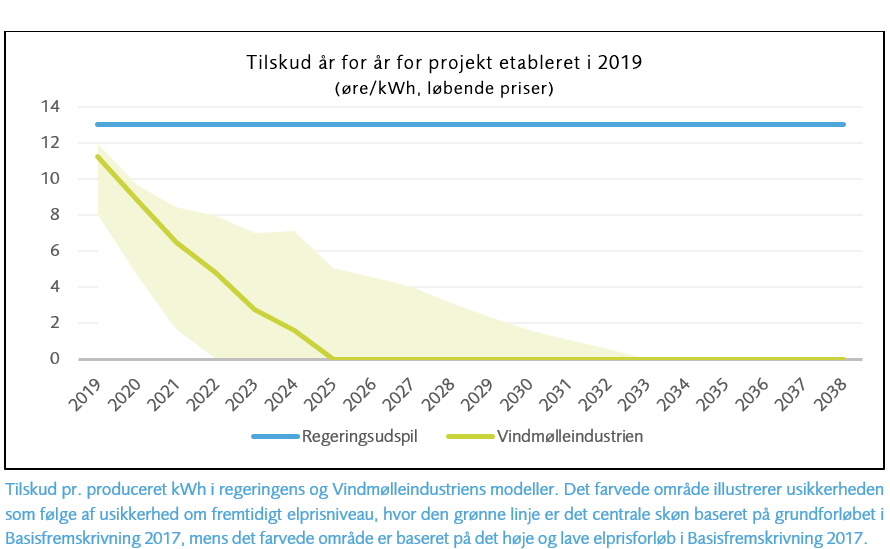 Click to enlarge. Blue line represents prices government's model. The green line, represents estimates of DWIA's model. The colored area illustrates the range of prices as a result of uncertainty about future electricity price levels, with the green line being the central estimate based on the baseline scenario. (Source: DWIA)

"The savings for taxpayers will be between DKK 0.7 and 1.1 billion with the wind turbine industry's proposal depending on the development of electricity prices in the future," DWIA said.

DWIA believes this auction model would bring down the cost of energy, as seen in the UK and German auctions, to lower than DKK 0.12/kWh, which would then decrease over the contract period.

DWIA also said its model would only mean payments for approximately six years, as opposed to the government's proposal of 20.

A spokesman for DWIA said "As an industry we are asking for less subsidies, however, we find this smarter as its gets Denmark more megawatts at a lower price."

"The government must be praised for allocating DKK 1.3 billion over 20 years. It is an amount that, with our model, can get a lot of green change, and therefore it is also my message that we need more value," said DWIA's Jan Hylleberg.

"If the government is willing to use the model we are presenting, we will have twice as much wind over the next couple of years while it will cost less for Denmark," Hylleberg added.

DWIA admitted its proposal would cost the government slightly more in the short term, but the savings could be realised later.

"Of course, Parliament is adopting the model to be used and we are ready for the competition that will be forward-looking, but we also think that the cost of society and taxpayers should go as far as possible, and at the same time get away from grants as quickly as possible," added Hylleberg.

Biden plans to halve US emissions by 2030

The US president announced a new greenhouse gas emissions target during a virtual meeting of world leaders, convened to discuss climate change

Concrete slip-forming of 11 spar foundations reached 20m at Aker Solutions' yard and will continue to 107.5m at a deep-water site