At the end of June, Vestas unveiled the latest evolution of the turbine platform it launched in 2010 — a 3MW machine with a 112-metre rotor diameter.

Since then, the number of options has steadily grown, with greater choice in rated capacity, rotor size and hub heights for different sites and wind resources.

There are now eight models across the range, including for the first time three machines with a nominal rating of 4MW, but with an additional power-mode option that boosts capacity to 4.2MW.

The remaining five models still retain 3.45MW power ratings - up to 3.6MW with the power-mode option — but, as far as Vestas is concerned, these are all part of its new "4MW platform" family.

According to Vestas chief technology officer Anders Vedel, the increase from 3MW to over 4MW, together with the growth in rotor diameters over the past seven years, has improved annual energy production (AEP) of the turbine by up to 50%

The latest evolution includes the addition of one model for every wind class. The new V117, V136 and V150 4MW machines give Vestas access to even more extreme site conditions across the globe.

The high-wind V117-4.0/4.2MW takes the Vestas platform into typhoon territory for the first time and is designed to withstand wind gusts of up to 80m/s.

Vedel says the turbine could be used in strong wind areas, such as the Caribbean, Japanese, Chinese and Vietnamese coastal areas, and areas in northern Europe, including the UK, that have high winds but impose hub height restrictions.

Japan's renewable revolution has failed to really materialise following the Fukushima nuclear disaster, with only 196MW installed in 2016. It was outstripped by South Korea (201MW) for the first time.

But China and Vietnam are increasingly active markets for western OEMs, and especially Vestas, which reorganised its Asia-Pacific sales offices earlier this year. The Danish firm won about 475MW in orders for China in the first half of 2017.

The Caribbean market also remains largely untapped, still dependent on fossil-fuel imports, while its under-developed infrastructure has made it difficult for wind energy to break through.

The region's potential for tropical storms and hurricanes has also limited the wind industry's chances there, despite generally good resources when the winds are less extreme. Vestas hopes the new V117-4MW could open up this market.

The northern European market remains a stronghold for the firm, and Vestas has its eye on the growing need for repowering. A higher-rated machine would allow it to outmuscle some of its rivals, while dealing with the high wind gusts rolling in from the North Sea.

Vestas claims the V150 will be the highest yielding low-wind onshore turbine on the market, and says the design specification was developed with the move to auction-based systems very much in mind.

Company CEO Anders Runevad has said that while auction systems for energy generation are not new, they have certainly increased in popularity. In 2009, about nine countries used auctions to procure energy, in 2016, that had grown to over 60 markets, according to Runevad.

With the V150, Vestas is also trying to tap into northern Europe's increasingly competitive low-wind market. The turbine has the largest rotor diameter in its class and comes in at just four metres shorter than Siemens' 7-8MW offshore turbine.

It is equipped with 73.7-metre blades that are longer than those of GE Renewable Energy's 6MW Haliade offshore wind turbine, and not far off the 80-metre Vestas-designed blades being used on the MHI Vestas V164 offshore turbine.

Combined with Vestas' 166-metre tall, large diameter steel tower, the V150-4MW/4.2MW has an expected tip height of 241 metres, taking it beyond Nordex's 230-metre tall prototype installed last year, which claimed then to be the tallest onshore turbine erected to date.

In addition to developing the platform, Vestas released a concept design for cable-supported towers in March.

Specific hub heights for the tower have not been released, and Vedel says there is still no date for the commercial release of the design, but he does not rule out their use on the tall turbines: "Why not?" he says.

The V136 can also capture low-winds, but will be better suited to those areas where there are height restrictions, particularly in the US, where the move to 3MW-plus machines is becoming more pronounced.

"The V136 is really a global product playing in all corners, but due to its low-noise performance we see it playing particularly well in North America, where we have stringent requirements," says Vestas senior product manager, Kristina Feldmann.

She also pointed to the French market as one constrained by noise restrictions. "When you have turbines close to houses, this will always be a product that will fly," she said.

The incremental growth from 3MW to over 4MW in seven years is the result of a continuous drive to bring down costs. "We are working on numerous technology projects. This is not about spreading ourselves very thin, but it is about understanding what can contribute to the reduction of the levelised cost of energy," says Vedel.

"Whenever we become more clever and learn things - and that could be from a V136 or the multi-rotor concept - we take that into our models, which allows us to take things to the next level," he adds.

In April 2016, Vestas unveiled its four-rotor research concept comprising four V27 225kW turbines. According to Vedel, the turbine is still testing at the Roskilde site, but lessons have already been learned from it, notably in control systems, that have been applied to this evolution of the standard single rotor platform.

Delivery of all three new 4MW turbines is scheduled for the second quarter of 2019.

Lagerwey unveiled the 4MW variant of its IEC class IIA L136 turbine in 2016, with the option to increase capacity to 4.5MW at projects or markets where noise limits are not an issue.

The direct-drive permanent-magnet (DDPM) turbine is based on the firm's L100 platform and is designed for high-turbulence sites, such as those in coastal or forested areas.

A first prototype of the turbine was installed in Eemshaven, Netherlands, in June. Given the tongue-in-cheek name David after being installed beside a traditional Dutch Goliath windmill, it will be joined by a second prototype after the summer, Lagerwey said.

The Dutch firm opened a new factory, also in June, for construction of the turbine, as the previous facility would have been too small to get the products out the doors.

The facility will be able to produce 50 turbines a year but has the potential to expand if the demand is there.

To date, the only direct order for the machine is for the Growind project in Eemshaven.

However, Otek, a subsidiary of Russian state energy group Rosatom, signed a licensing deal with Lagerwey in June. The deal includes the 4MW platform when projects begin installation, but that may not be for another 18 months. 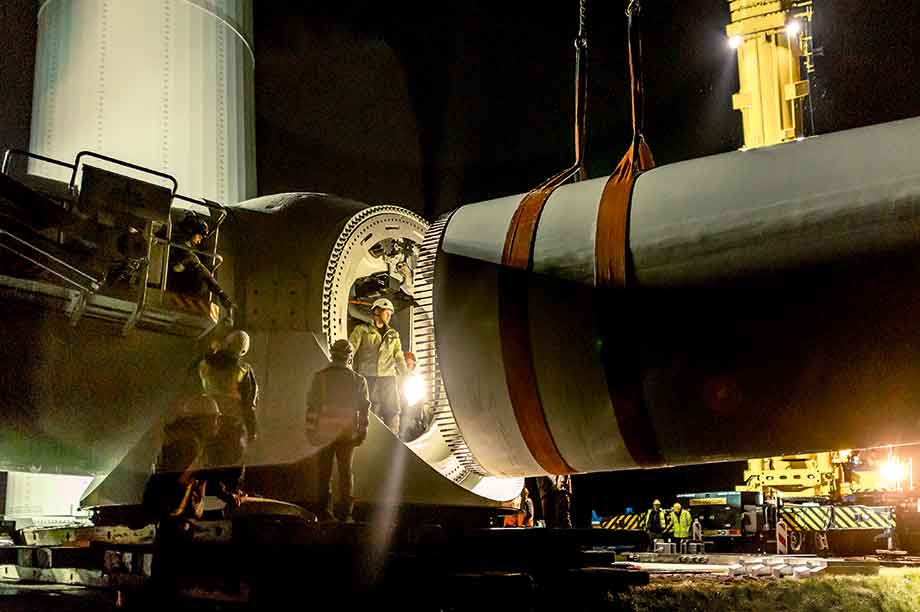 Prototype… The first L136 was installed in June

The lack of a track record means the Lagerwey 4MW platform remains largely an unknown entity compared with its rivals.

FIRST TO MARKET — ENERCON STEALS A MARCH ON 4MW-PLUS RIVALS

German manufacturer Enercon has the best part of a two-year head-start over Vestas in terms of commercial roll-out of 4MW-plus turbines.

Three prototypes of its new EP4 4.2MW direct-drive platform were installed last year, and the first production models are now in service. Enercon expects to build around 150 units this year, split fairly evenly between the E-126 and E-141 models.

Prototype testing validated an upward shift in specification for both turbines. The medium-wind speed E-126 (IEC Class IIA) was cleared for use at high wind IA sites, while the E-141, designed for low-wind IIIA locations, was upgraded for IIA sites.

The industry is not entirely convinced of the practical usefulness of this measure, especially in markets where support schemes cover only the first 15 years of operation, but Enercon has worked hard to prolong the turbine's operating life, especially in the field of minimising materials fatigue damage.

Both variants are offered with Enercon's NG (next generation) concrete-steel hybrid towers, a clever segmented design for ease of transport and installation, although only the E-141 will initially get the tallest tower, for a hub height of 159 metres, which corresponds to an installation tip height of 229.5 metres. 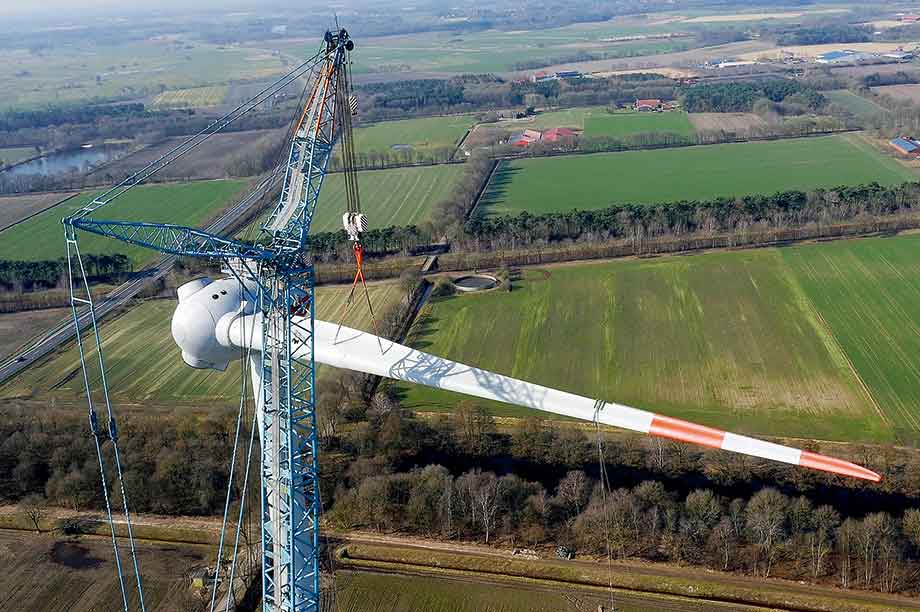 The same emphasis on advanced modular construction can be seen in the E-141's slender, segmented composite rotor blades, with the familiar Enercon winglet at the blade tip.

Enercon is, of course, no stranger to the world of large onshore turbines, pioneering this very specialised market sector with its EP8 range, now rated at 7.5MW.

But the EP4 is a very different class of machine, focusing on optimising the levelised cost of energy rather than maximum energy capture. Further blade and tower options are expected in the near future.