In early June, Russian nuclear state corporation Rosatom won 360MW of capacity in a wind procurement round through its VetroOGK wind subsidiary.

While it was by no means the biggest or best-known winner — Finnish developer Fortum, working with local partner Rusnano, was awarded 1GW in licences, while major wind player Enel entered the market by winning 291MW — Rosatom stands out for other reasons.

The other developers have already signalled their intention to use big-name turbine manufacturers, with Vestas set to supply Fortum, and Siemens-Gamesa Renewable Energy favoured by Enel, but Rosatom has chosen to go a different way, and found an agreeable partner in Lagerwey.

The Russian firm contracted the Dutch manufacturer, via another subsidiary called Otek, to help it set up production facilities in Russia, train employees to build the turbines, and use Lagerwey's technology at its projects.

Licensing agreements are relatively rare, with many of the big industry players preferring to set up their own in-country subsidiaries or ship components in, if possible, but there are precedents.

Siemens licensed its 4MW offshore turbine to Shanghai Electric in 2014. US manufacturer Northern Power Systems (NPS) has been licensing its technology to Brazilian partner WEG since 2013, starting with its 2MW direct-drive platform and launching a 3.3MW model in 2015.

Consultancy aerodyn engineering has also licensed some of its designs, most notably to Ming Yang, but that partnership with the Chinese manufacturer has ended.

Lagerwey's CEO, Huib Morelisse, told Windpower Monthly why licensing was a good move for his company. "First and foremost this is a recognition that we have a technology that can compete internationally. That recognition is important," he said.

"Second, this enables us to create scale when it comes to selling our platform internationally."

On top of the 360MW won in June's auction, Rosatom's subsidiary has a total pipeline of 970MW in Russia, giving Lagerwey a huge potential footprint in the market, which is dominated by gas and oil.

The fairly new market has not deterred Lagerwey, however. Morelisse said there seems to be a "true commitment" in Russia now, following some earlier false starts.

"We see the other big players getting into the market, so there is a strong eagerness to really establish the industry," he said. "Having said that, so far, very few wind turbines have been built, so I think there is quite a significant task ahead for Otek to pave the way to start doing this on a large scale. Not only for Otek, but also for Fortum and Enel, which will start building parts there, creating a true large commercial market."

Lagerwey itself has installed a little over 220MW globally, according to Windpower Intelligence, the research and data division of Windpower Monthly, so a strategy of licensing its technology could well pay off.

"Our strategy is unusual," said the company's director of licensing and ventures, Sjoerd Sieburgh.

"Of course you have the big players, which normally do local manufacturing, local sales, but it is our licensing strategy with such a competitive technology which is simply great.

"In (new) markets we see non-usual players coming up. I cannot mention names - but it is becoming a bit like the oil and gas business, where large national champions are looking for partnerships for technology.

"Rosatom is one example in Russia. But we're seeing the same thing in India and some other markets, where we are being approached by companies that will probably be new to you by the time they reach your magazine looking for technology partners," Sieburgh explained.

Lagerwey thinks it has seen a niche it can tap in to. With the entrance of new companies seeing renewables as a secure revenue source, big "national champions", as Sieburgh put it, could be looking to add more strings to their bow. And this could be done most easily and cheaply through licensing, as opposed to mergers and acquisitions or setting up a new company.

"We are more of a technology house. We are very happy being a technology partner for a company like Rosatom and making sure that they produce their own technology," Sieburgh said.

"We believe this to be a good model for a company like ourselves, and something that will truly change the market. I don't think the governments will simply accept that foreign companies coming in and taking the money out is going to be the future model," Sieburgh added.

"The large turbine manufacturers will find it more difficult to compete against these national champions, because they have an edge." These firms will have more local knowledge and local sway, he suggested.

Lagerwey's 2.5MW and the newly unveiled 4.5MW turbines will be available to Rosatom, as will its innovative climbing crane solution.

"The 2.5MW is proven, but they will also go for the 4.5MW because it is the most competitive model," Sieburgh said.

With the onshore market having only just broken into the 4MW-range (see p24), would such a turbine in a relatively new market like Russia be too advanced?

"We believe the 4MW range is much more the future, so it makes sense from a licensing perspective. If you're setting up a factory that will be at peak production in a year and a half from now it's (best) to go for a 4MW platform," said Sieburgh.

"For the 4.5MW platform, we now have the first model, the L136, with a hub height of 165 metres. We're working on an L158, with a 158-metre rotor diameter, which we expect to come out to the market fairly soon. And in the future, we have ideas around modular approaches," Sieburgh added.

In late June, the company inaugurated a new crowd-funded factory in the Netherlands, designed to manufacture the larger 4.5MW turbines, which would have been too big to fit through the doors of the old facility, the company said. The factory is set to supply some parts to Rosatom. 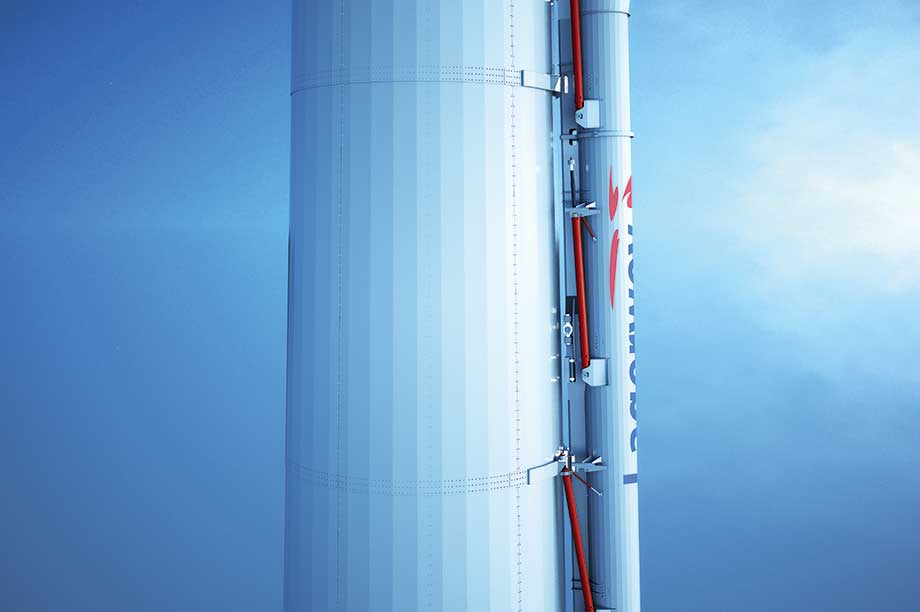 On show at the opening was a prototype of the company's innovative climbing crane solution (right), which is set to begin testing over the summer. "On the basis of the tests, we will decide on which turbines we will start using the crane," Morelisse said.

The climbing crane and licensing strategy show that Lagerwey is looking at the industry through a slightly different lens from other companies, but, like the crane itself, it is an approach that has yet to prove itself.