Senvion's contract to supply ten marine-adpated 3.0M122 turbines for a low-wind offshore project in the Apulia region of southern Italy represents the first, albeit modestly sized, wind farm in the Mediterranean. The 30MW nearshore project will be built in front of Taranto harbour in water depths of 4-18 metres, with commissioning expected in autumn 2018.

The 3.0M122 model, introduced in 2013, was selected for its suitability in meeting stringent building permit requirements, said Senvion vice-president offshore Cornelius Drucker. These included a hub height of 100 metres and a maximum installed capacity of 30MW.

"Senvion has been an integrated onshore and offshore business since the company was founded in 2001," Drucker pointed out. "We installed our 5MW offshore prototype in 2004, and built an extensive track record with that turbine and its 6.15MW and 6.2MW successors."

Going back to 3MW machines for a new project rather reverses the trend in the offshore sector, where turbines have grown rapidly from the pioneering kilowatt-class units to today's 7-8MW machines. And Senvion, then Repower, was right at the forefront in the development of multi-megawatt turbines.

When I asked a senior spokesperson during the installation of the 5MW prototype in 2004 about the strategy behind the leap from its 1.5MW MD 70/77 series, he said: "The 5MW development was indeed a big step, despite an 80-strong R&D team. But we deliberately decided to sidestep the 3MW-plus class. We had a good track record onshore, and excellent contacts with European offshore developers.

"But trying to compete with 3-3.6MW offshore machines would not have made sense for us. Why buy such units from a medium-sized company if a comparable product is already offered by much larger international competitors? When entering the offshore market, we clearly want to have the competitive edge in terms of turbine size and energy yield."

Mechanically, the 5MW and 6.15MW-plus models share a non-integrated high-speed drivetrain concept with a hollow cast iron main shaft supported by two large bearings. The three-stage gearbox is attached to the main shaft together with a six pole doubly-fed induction generator (DFIG).

A benefit of this main shaft support arrangement is that it allows gearbox exchange without having to dismantle the rotor. A specific electrical system feature of the turbines is that the full power electronics, including the MV-transformer, are all located inside the nacelle.

By contrast, the 3.0M122 features a non-integrated high-speed geared drivetrain with three-point gearbox support (one rotor-bearing) and a six-pole DFIG.

The disadvantage of the three-point support arrangement is that in the event of a gearbox exchange, the complete rotor must be removed before hoisting out the gearbox or the complete gearbox-main shaft-rotor bearing assembly.

However, most modern turbines, including the 3.0M122, feature a main shaft clamping solution that allows gearbox exchange functionality comparable with four-point solutions. Full power electronics, including the MV-transformer, are all located inside the tower base.

Each of these two power-electronic system locations, plus a variant with only the AC/DC rectifier located in the nacelle, has its own supporters and opponents.

The 3.0M122's mechanical and electrical systems were evaluated for marine adaptation requirements. "However, changes - apart from a switch from jacket to monopile foundations — were limited mainly to some corrosion protection measures similar to those applied in the larger offshore Senvion turbines," said Drucker. 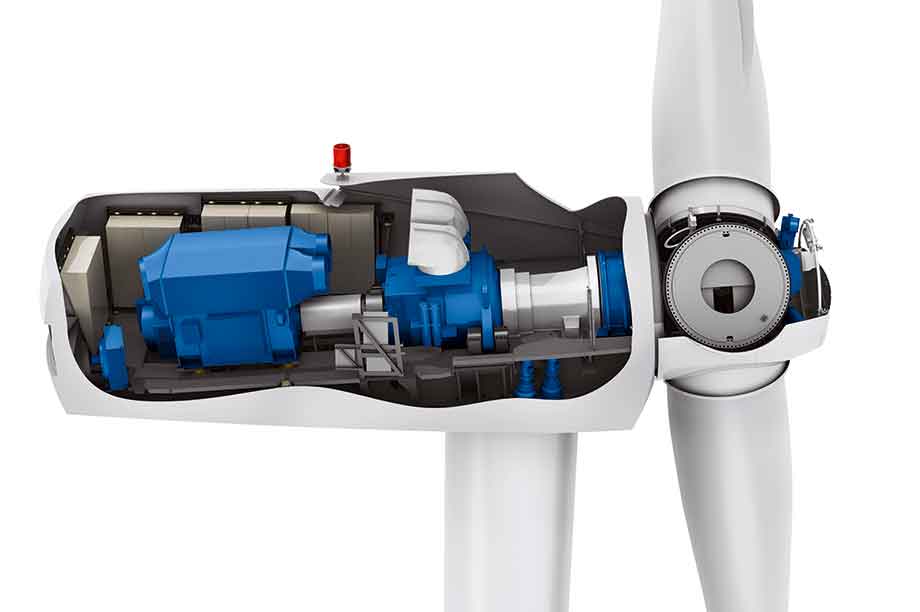 "We could turn things around faster by bringing in specific offshore-related aspects quickly because our onshore and offshore engineering and production process are not treated separately."

The same teams are working on all new blades, for example, which include the latest RE68.5 blade for the 3.6M140 turbine, and the RE74 blade developed for the 6.2M152 flagship.

During our conversation at the recent London offshore conference, Drucker also lifted the curtain a little more on the company's plans for a 10MW-plus offshore turbine.

"Anybody can announce a large turbine, but what clearly distinguishes us, especially from start-ups with wild claims, is that we have over 15 years of technology development and offshore track record experience already behind us."

He added that the new turbine on the drawing board will certainly again be a geared upwind concept with three blades. Its rotor diameter will most likely be about 30% bigger than the 152-metre rotor fitted to the 6.2M152.

For Senvion, the key development focus is offering the right-size turbine with high reliability and capable of meeting the latest market demands regarding the lowest possible levelised cost of energy.

Equally important, said Drucker, is that the turbine must fit well into the new European offshore auction systems. "That requires dialogue with all stakeholders, where the customer should clearly come first," he said. "Secondly, a prototype must be installed well in time for being ready to match only partly known offshore project demands for 2024-25."

While many details still remain unknown about this ambitious product development, Drucker's quote on the envisaged rotor increment indicates a few likely parameters, including a rotor diameter of around 195-200 metres.

By including Senvion's product market focus at European high-wind IEC class I sites, and assuming a modest specific power rating of 375W/m2, this could correspond to power ratings in the 11-12MW range.

The alternative option for Senvion is to choose a much higher-rated high-speed geared drivetrain, a possibility that cannot be excluded, but which is far less likely based on the above considerations.

Repower, now Senvion, was founded in 2001 with a product portfolio including a pitch-controlled variable-speed onshore turbine: the 1.5MW MD series.

The MD70 (pictured, below) was launched in 1998, initially developed by German engineering consultancy Pro + Pro as a licence product. The MD70/77 models feature a high-speed geared drivetrain with three-point gearbox support and DFIG. 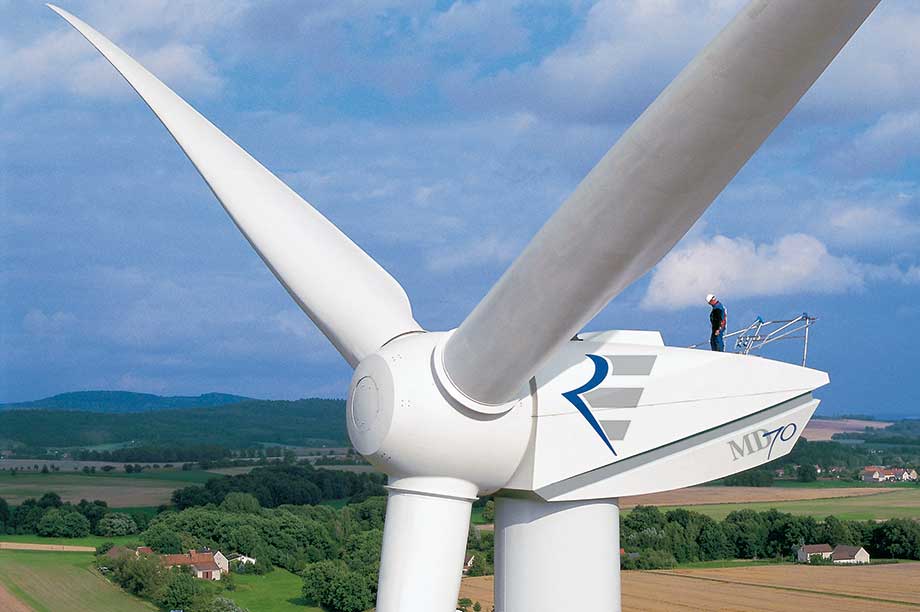 Variable-speed operation and the use of a DFIG was at that time still rather new to the wind industry, which was dominated by fixed-speed and semi-variable-speed Danish-made turbines.

Repower introduced the 2MW MM successor in 2002, based upon the same MD-series technology and design principles.

The first 3.3MW 3.XM prototype with a 104-metre rotor diameter was installed in December 2008. Mechanically and electrically largely based on the MD and MM series, it evolved in 2010 with two variants - the 3.4M104 and 3.2M114. These sister models built upon similar technology principles with one exception.

The question is whether DFIGs will be capable of meeting ongoing future turbine grid-integration demands. Senvion decided on a gradual switch from DFIG with partial power converter to induction generations (IG) with full converter in the 3.XM platform.

The Next Electrical System (NES) was incorporated in a 3.4M114 NES prototype in 2015, followed by a 3.2M122 NES prototype last year. The 3.6M140 onshore flagship is the first turbine of a new product platform and NES will be a standard fit.

The pitch-controlled variable-speed 5MW offshore turbine, with what was then a record rotor diameter of 126 metres, evolved in 2009 into the 6.2M126 model. The latest evolutionary 6.2M152 model features an enlarged 152-metre rotor. Both the 6.2M126 and 6.2M152 come with a power mode option.