A taste of the harsh marine environment greeted visitors and delegates to WindEurope/RenewableUK Offshore Wind Energy 2017 event in London on 6 June.

High winds and driving rain lashed the city's Docklands in a fine example of the great British summer. But the weather failed to dampen spirits inside the conference halls, where the movers and shakers of the offshore wind industry had a good story to tell.

Costs are falling, confidence is rising, technology is progressing.

Even the unseasonal conditions had an upside. It was revealed the day after that the UK's offshore fleet, now standing at 5,356MW with the commissioning of Dong Energy's Burbo Bank Extension project in May, supplied 10% of the country's electricity demand on 6 June. 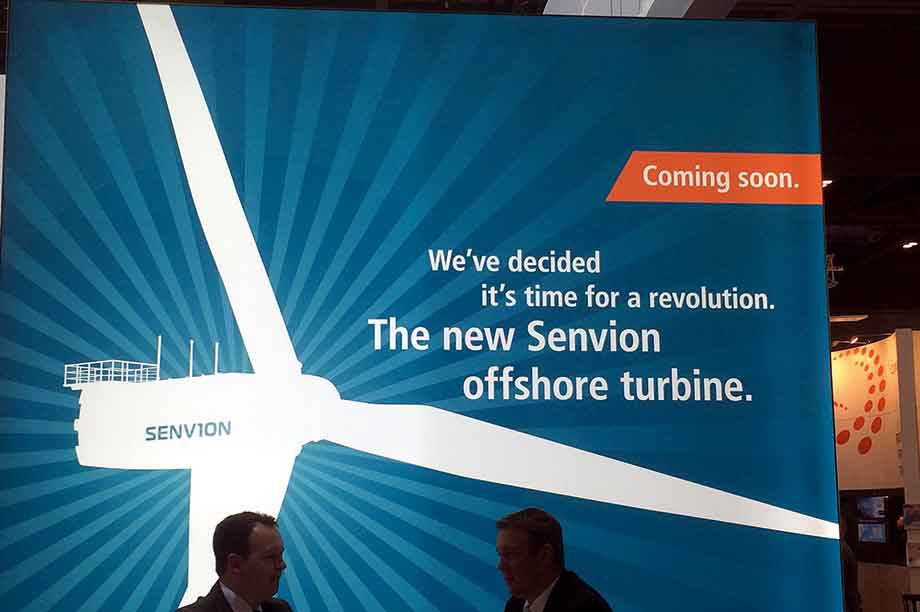 We had been led to expect some significant product announcements in London, but, in the event, there were a number of big no-shows.

Having let slip at the American Wind Energy Association conference in May that it was developing a 10MW-plus offshore turbine, Senvion declined to reveal further details in the UK.

Siemens Gamesa Renewable Energy (SGRE) was also scheduled to reveal something new, but the announcement was postponed at the eleventh hour.

That left MHI Vestas to hog the product limelight with the latest 9.5MW variation on the V164 theme, effectively a limited edition run-out model.

A more tantalising glimpse of what offshore wind's longer-term future might look like was provided by aerodyn engineering, which displayed a 1:36 scale model of its twin-rotor, floating SCDnezzy2 concept.

But some of the biggest questions over offshore wind turbine development went unanswered in London. Adwen had no presence at the show, and if anyone on the SGRE stand knew anything about the future of the Adwen AD 8-180 machine, they weren't telling.

Requests for information were batted away with the statement that it was too early in the Siemens-Gamesa merger process to reveal anything at this stage.

An onshore-installed prototype is now up-and-running at Bremerhaven, while Adwen itself is undergoing a restructuring programme, but it remains unclear how the 8MW platform might fit into SGRE's product strategy. If, indeed, at all.

Also conspicuous only by its absence was GE Renewable Energy, which looked pretty strange for a company that has headquarters and manufacturing facilities just across the channel in France, as well as a healthy pipeline of European offshore orders for its 6MW Haliade turbine.

GE's offshore wind CEO John Lavelle refused to be drawn at the AWEA event in May on the future of the Haliade, or what the company is planning in order to compete in the 10MW-plus game that is now fast approaching for the sector.

It can be reasonably assumed that the firm is working on a big new machine, since that is the subject of a European Commission investigation into GE's €1.7 billion takeover of blade maker LM Wind Power, a deal that had been given the green light by regulators on the understanding that GE was not planning a 12MW turbine.

Where this leaves the Haliade, rapidly falling behind the competition in terms of rated power and rotor diameter, was the subject of much gossip and speculation in London.

It now seems clear that the 238 turbines ordered in the first wave of France's offshore deployment will not be required until 2021-22, by which time it will be obsolescent if not actually obsolete.

But France's fiendishly complicated offshore planning regulations will make it prohibitively difficult to change turbine type and size for these projects, which are still the subjects of legal challenges in the French courts. 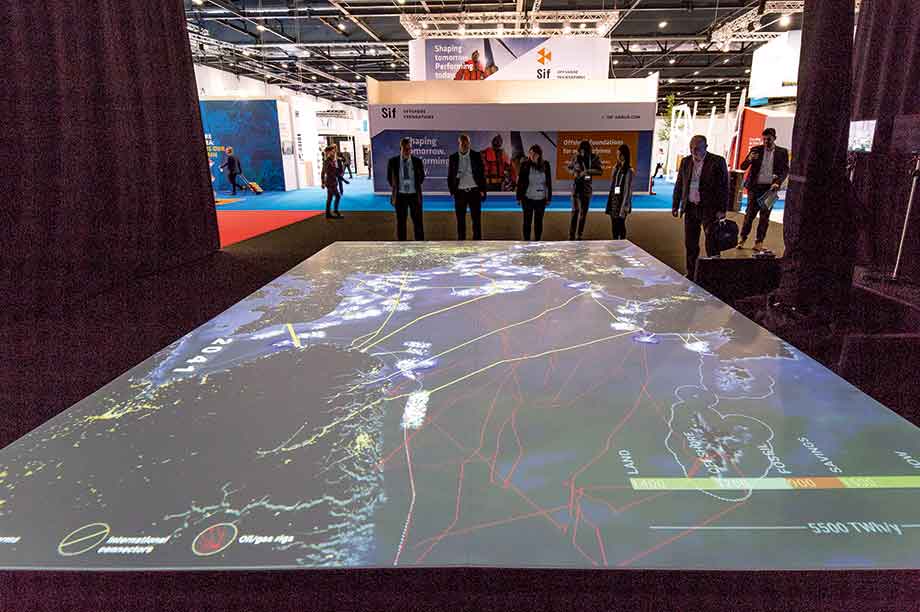 A major factor in the plummeting of offshore wind costs over the past year has been reduction in rates of finance. Simply put, offshore wind is no longer regarded as high-risk by investors.

Proven and improving technology, a steadily growing bank of experience and expertise, and a lengthening track record of successful installation and deployment have driven down finance and insurance costs.

According to Alain Delsupehxe, CEO of developer Eolfi, that favourable investment outlook is now being extended to floating offshore projects for the first time.

"I wouldn't have been able to say that even six months ago," he said at a session devoted to scaling up technology. Eolfi, together with the China General Nuclear Power group, was awarded a contract from the French government last year to develop a four-turbine 24MW pilot floating project off the coast of Brittany in north-east France that is expected online by 2020.

Floating foundation aficionados - and there seemed plenty in London - were keen to point to another advantage of the technology over fixed-bottom foundations beyond the usual arguments about being able to tow complete turbines out to site, and the better wind resources of deep water, far-from-shore locations.

Industrialisation is the key word here: a uniform design can be mass-produced in a way that monopiles and jackets, which require adaptations for water depth and seabed conditions, cannot.

Bent Christensen, who heads SGRE's cost of energy and offshore engineering departments, said at the same session that he had yet to see two drawings of a jacket design that were the same. "Standardisation and harmonisation are absolutely key," he said.

"We're in a technological race, and time to market is very important. We stopped selling the 7MW turbine (Siemens SWT-7.0-154) last year, even before we'd installed the first one."

Desupexhe declared with confidence that 2017 "has been the year of lift-off for floating", but, in conversation outside the session, Julian Brown, co-founder of consultancy 8.2 Aarufield and RenewableUK chairman, was less convinced.

Standardisation and harmonisation depended on the industry coming to a firm conclusion on the ideal all-round design, which it had yet to do, he pointed out.

Engineers and developers are still working on a variety of very different designs. The semi-submersible structure, as adopted by Eolfi, for example, and the spar buoy preferred by Statoil, are the most advanced in development and testing, but the barge and tension leg platform also have their supporters. Utility-scale floating offshore wind is probably still up to a decade away, said Brown. 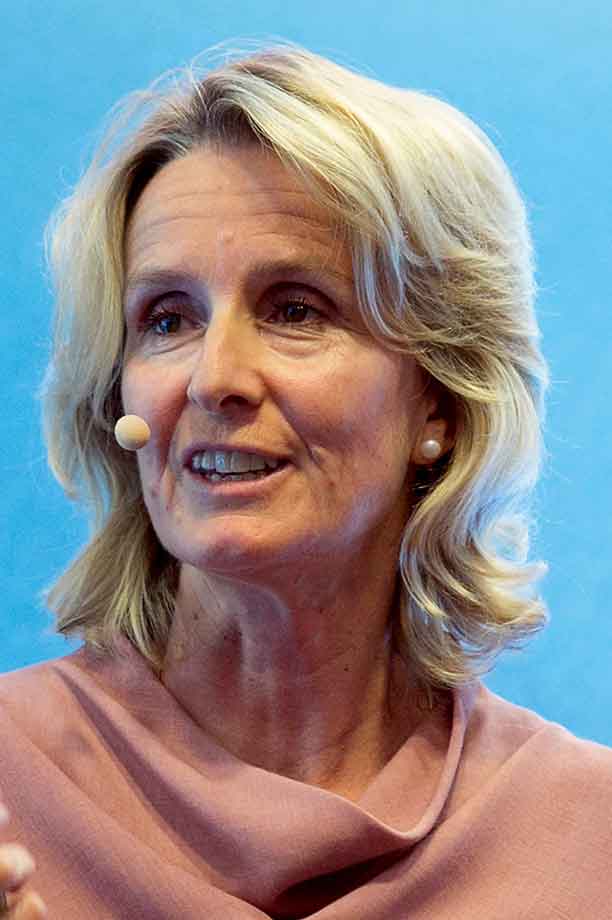 Irene Rummelhof (left), Statoil's vice-president for new energy solutions, was more optimistic. "The potential for floating wind is almost unlimited. We can deploy in water depths of up to 750 metres, which opens every coastline," she said.

Floaters do not require as much steel as fixed-bottom foundations, but can support the same turbines, and deployment far from shore allows individual turbines to be more widely spaced to reduce wake effects, she argued.

"We should be able to go beyond fixed bottom offshore costs," she said, though no timetable for when this might be achieved was provided.

Oil giant Shell was an interesting contributor to a discussion on offshore wind and the wider energy system. Mark Gainsborough, executive vice-president of Shell's new energies division, argued that a change in mindset is required to drive the offshore wind industry further and faster.

"Instead of organising the next tranche of leases and tenders simply on the basis of meeting national targets in 2030, we would propose that the next phase be thought of a stepping stone, a de-risking exercise, towards a much bigger offshore wind industry that operates at the scale of the potential resource," he said.

Gainsborough called instead for a few, large integrated projects of up to 10GW with an "anchor tenant" to take the biggest risk for about half the project.

"We believe it is important for the innovations - technical, commercial and financial - to be tried and tested before going large scale. We don't think that will happen if we continue with power plant-sized leases," he said. 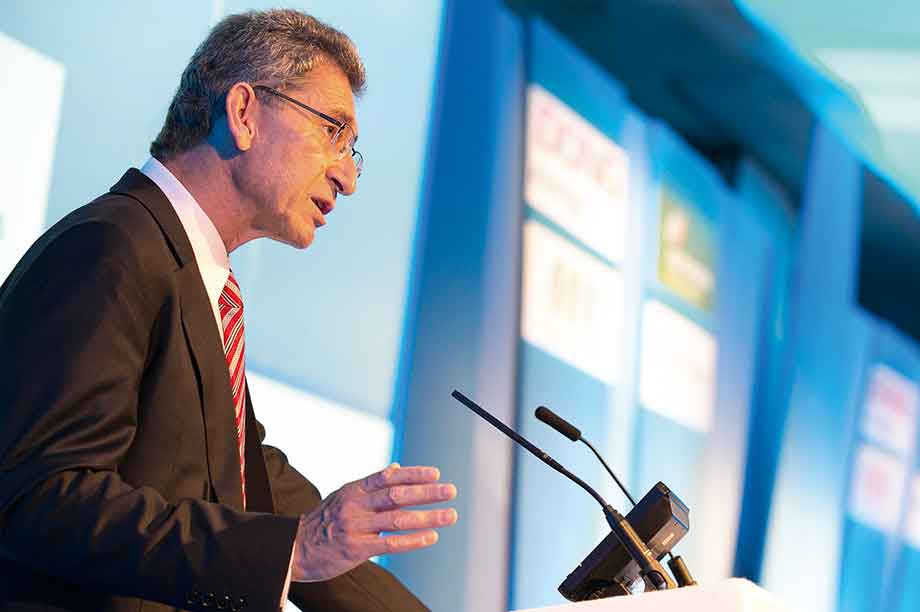 "It's now finally believable that wind, as the largest-available renewable energy for north-west Europe, can also be the lowest-cost provider of energy", said Mark Gainsborough, executive vice-president of Shell's new energies division

Whether Shell envisages itself as an "anchor tenant" is an open question. The company has dabbled in offshore wind before, but dropped out of the London Array consortium in 2008 because, said Gainsborough, "it didn't meet our investment criteria".

Nine years later, Shell does however, appear to be singing a different tune. "It's now finally believable that wind, as the largest-available renewable energy for north-west Europe, can also be the lowest-cost provider of energy," he said. Finally believable?

Rainer Bakke, Germany's minister of economic affairs and energy, had a counter argument for the Shell approach and manufacturers' widespread calls for more ambitious targets. Until the country has sorted out its grid bottleneck problems - particularly transmitting electricity from north to south - offshore wind targets will remain modest.

"When it comes to the costs of production, I think the offshore wind industry has a lot of arguments on its side. But we have to make sure that electricity is reaching consumers," Bakke said. "Once we have improved transmission, then we would be open to increasing the target."

There was unanimous agreement in London for smarter and more integrated grids, particularly in relation to the need for collaboration and cooperation between the countries operating in the North Sea. Already complex, this process is not helped by the largest offshore player simultaneously negotiating its way out of the European Union.

"Brexit brings a lot of difficulties," said Belgium's energy and environment minister, Marie-Christine Marghem, at an opening-day press conference. (And the difficulties became more pronounced on 9 June when the UK's snap election returned a hung government.)

The subsidy-free bids from Germany's first offshore auction was another hot topic. Dong CEO Samuel Leupold was quick to point out that those bids are only achievable if the wholesale price of electricity rises. "No energy-generation technology can manage without subsidy while the wholesale price is so low," he said.

Baake provided some reassurance. "The wholesale prices we see today will not be those of the 2020s and 2030s," he said. "We have much more generation capacity than we have demand. Some capacities will have to leave the market." 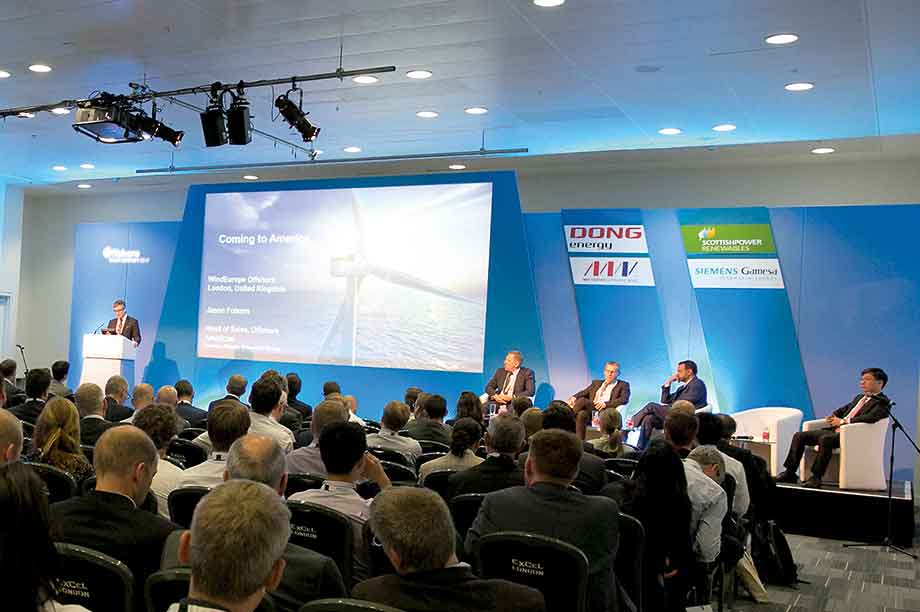 Jason Folsom, SGRE's commercial head of offshore wind for America, admitted ruefully that despite being in post for several years he had yet to sell a single turbine in the US.

He was convinced his fortunes were about to change, though. "Offshore wind is coming to America," he said.

"About 50% of Americans live near the coast. Both east and west coasts have high electricity prices and constraints on onshore wind. Both have strong political will to support offshore wind.

"I see the states as dominoes, and they're starting to topple. This market opportunity is now real."

Folsom and other speakers, notably Jose Zayas, director of the wind-energy technologies office in the US Department of Energy, recognised the challenges offshore wind faces in building up a marine supply chain, but they were sure of the direction of travel.

"I believe we talk too much about economics. Offshore wind has attributes that we need to understand," said Zayas. "You need to monetise the savings made in CO2 emissions, health benefits, reduced water consumption, job creation, and its contribution to energy security."