MHI Vestas has upgraded its large offshore turbine to a nameplate capacity of 9.5MW, together with a number of detail changes aimed at reducing the levelised cost of energy (LCOE). The rotor diameter remains unchanged at 164 metres.

The V164-9.5MW has successfully completed power curve and loads measurements in field testing at the company’s Østerild site since late 2016. It is now available for firm orders for specific projects. The first commercial deployment is expected by 2020.

When introduced in March 2011, then with a nameplate capacity of 7MW, the V164 had the wind industry’s highest power rating and was "to provide the highest energy capture and highest reliability" in the demanding marine environment.

However, the turbine was always designed for at least an 8MW capacity, as was reflected by the upgrade announced a year later. "Developing this large-scale offshore-dedicated turbine represented a huge challenge, essentially scaling up from a validated 3MW to 8MW," said senior product manager Anders Bach Andersen. "The largest rotor we had produced before was 120 metres for a 4.5MW prototye with 58-metre blades, set against the V164’s 80-metre blades.

New features included a tube-shaped medium-speed drivetrain with the structural load-carrying main shaft housing bolted to a cast machine bed. The chassis design comprised a heavy-duty cast vertical section bolted to the machine bed, and integrated within a steel spaceframe structure to carry the weight of nacelle components and support servicing activities.

"The V164’s massive scale and design features made us cautious," said Andersen. "It meant applying extra design reserves to compensate for unavoidable know-how gaps and associated risks. But the 8MW has now become a mature serial product, with 35 units in operation [32 offshore at Burbo Banks Extension] and an order backlog of around 300 turbines," he said.

The V164-8.0MW is now offered with a power mode of up to 8.4MW. This software-based functionality is possible under certain operational conditions, but must fit into the IEC designs specifications envelope. The 0.4MW represents a 5% increase of the certified rating that is allowed within the IEC type certificate.

Upgrading to 9.5MW involved reapplying the electrical, mechanical, structural and thermal design reserves without sacrificing on design safety factors. The modifications are generally minor, requiring no changes in the main dimensions. 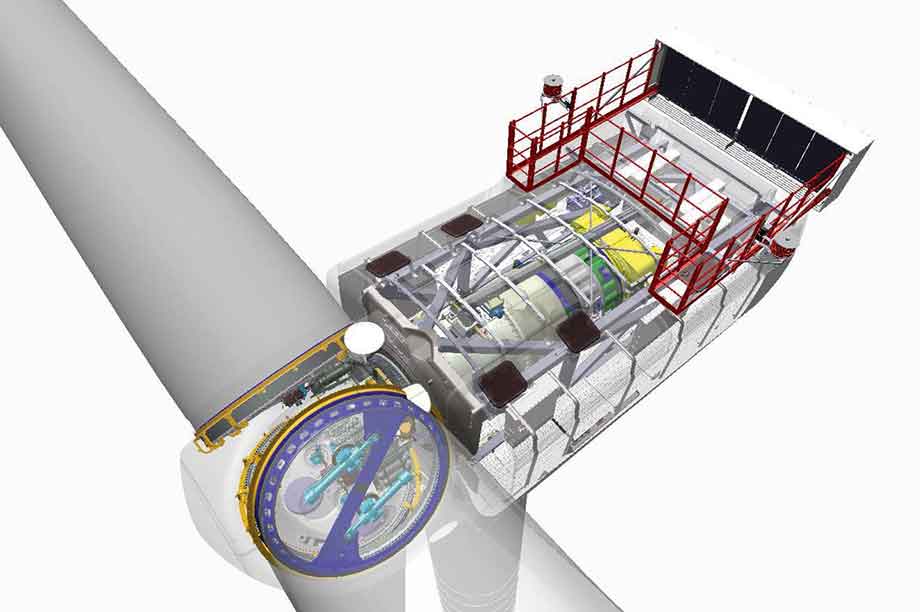 Beneath the surface… Dimensions will stay the same, with changes confined to the inside of the turbine

"Rated gearbox input torque has increased by 19% to 9.5MNm and required some gearbox strengthening without impacting the outer drivetrain and mass," said Andersen. That still leaves it a little short of the Adwen 8MW gearbox’s rated input torque of 9.9MNm.

"We also upgraded the electrical system and functionally modified the rooftop cooler for the gearbox, generator, hydraulics and rectifier, but without having to enlarge the total cooler size and operational aspects.

The upgrade reflects the dramatic changes seen in the offshore wind environment over the past few years. "In 2009, when V164 product development started, offshore Capex was high due to smaller turbines, a limited track record, offshore substation inclusion, a high-risk profile and a high cost of capital," said Andersen.

"But today, offshore substations and export systems have largely been taken out of wind project Capex, average turbine size has more than doubled, and the cost of capital and risk profile has also reduced a lot, and is likely to come down further."

Andersen illustrated the benefits of power uprating over rotor enlargement with a comparison of alternative scaling options and their effect on LCOE. An 855MW project could have either 106 8.1MW turbines with an enlarged rotor, or 90 of the 9.5MW unit.

A bigger rotor would boost annual energy production (AEP), but that raises turbines loads and requires an increase in hub height to maintain minimum wave clearance.

"Applying the 9.5MW turbines means 16 fewer machines, plus their associated substructure, cables and installation costs. The individual substructure and turbine Capex and Opex are essentially the same, but there is modest AEP penalty at project level," Andersen said.

"in 2009, when offshore wind project Capex was very high, the total Capex saving of deploying fewer higher-rated turbines would have been modest. But now that it is much lower overall, the relative share of installation is substantial, and so has a much larger positive impact on LCOE." 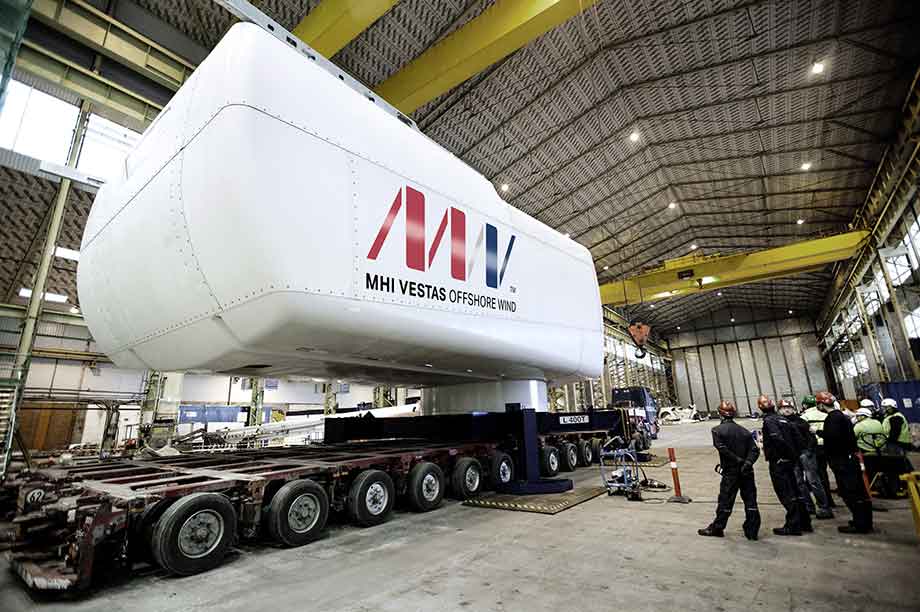 All components and sub-assemblies arrive by road in the factory warehouse, where they are checked and registered. Some critical components, such as the huge dark-blue coated gearboxes, are fitted with accelerator sensing devices. These record all acceleration forces imposed on the product during transportation and handling, and from manufacturered product to the installation of complete nacelles in a wind project.

The vast assembly hall is subdivided into a left part part for large components and sub-assemblies, and overhead cranes for internal hoisting, with the right part reserved for nacelle completion.

A key characteristic is a lean production process, still in development, based on Japanese Kaizen principles first developed by Toyota, and which includes multiple temporary fixed "tack" positions for the nacelles until completion. An air-conditioned tent is dedicated to creating a controlled environment for main shaft assembly. Individual main shafts are put inside in vertical position for shrink-fitting the largest front-bearing inner ring, followed by hoisting-in and lowering the cast housing over the shaft. The next step is shrink-fitting the rear-bearing inner-ring plus mounting a locking ring. The assembly process is finalised by 24-hour flushing with special oil to remove any metallic particles and other impurities.

"We decided on an oil-lubricated main shaft with oil filtration for optimal lubrication performance and bearing life, and minimal bearing pre-load variations during operation," said Andersen. "Full main shaft units can be exchanged without having to remove the rotor, and other drivetrain main components can also be individually replaced."

V-164 nacelles are huge viewed from the outside, and spacious and service-friendly inside. An unusual design feature is the upside-down mounting of the yaw motors inside the tower’s top section. It enables easy service access from an intermediate service platform, and more space with fewer obstructions inside the nacelle.

Proven in many generations of Vestas turbines since the V27-225kW model is the yaw brake system comprising opposing steel and Teflon rings, and multiple spring-loaded friction pressure points. The solution is designed to last 25 years and enables continuous rotor adjustment to wind direction changes.

A distinct design achievement is the compact "closed" hub for enhanced stiffness, which incorporates two approximately 700kg pitch actuators for each blade, individually removable with the aid of a telescopic inboard crane. The pitch bearings feature 4.6-metre bolt-circle diameter, which is large compared with "only" 4.2 metres for the 8.5-metre longer blades of the Adwen AD 8-180 turbine.

The V164 is equipped with load-based individual pitch control (IPC). "Blade root loads are continuously measured during each rotor revolution and used in the control of the turbine," explained Andersen.

Inside the assembly hall were four ready nacelles with their full covers mounted, and several electrical modules to be fitted in-house inside the bottom tower sections. Each module incorprates an internal power supply unit at the upper floor. This is going downward followed by an in-house manufacturerd DC/AC inverter (the AC/DC rectifier is in the nacelle rear), 66kV or 33kV transformer, and switch gear at bottom level.

MHI Vestas' Nakskov blade-manufacturing plant in Denmark started operations in 2014 in a refurbished former Vestas V90 blade facility. Blades are also manufacturered at the company's Isle of Wight facility in the UK, except the final painting and leading edge protection application stages, which are conducted in Nakskov.

The straight 80-metre blades are of the structural-shell type, whereby carbon-fibre sections are incorporated in the upper and lower shells. A noticeable feature of the 35-tonne unit is the large-diameter root section extending into a slender aerofoil towards the blade tip. The blade root incorporates a novel patented bolts-inserts design enabling reducing wall thickness, close bolt interspacing with more bolts at the circumference for absorbing blade loads. The combination of large blade root diameter and other distinct features indicates ample potential for future blade enlargement, building on the current design, or a complete new development.

Senvion has announced it is working on a 10MW-plus turbine. But the V164-9.5MW’s specific power rating of 450Wm2 probably represents a final installed power "stretching" with the current 80-metre blades. The next logical step for MHI Vestas to propel the unit over 10MW will require a larger rotor.

Andersen would not be drawn on specific plans. "The platform has already proven to be well scalable and we will do whatever necessary in future to stay competitive and fully match any competitor challenge."