This year's AWEA Windpower live blog is brought to you in association with GE Renewable Energy. If you missed day one, you can catch up here and all of the coverage from day two is here.

If you're at the event, please visit the Windpower Monthly stand.

Refresh this page for the latest updates from AWEA's Windpower 2017 conference in Anaheim, California.

12:32 - Remember, you can stay up-to-date with all the news, analysis and features from the across the global wind industry with Windpower Monthy, either here online or with the industry-leading magazine.

Be sure to give us a follow on Twitter and LinkedIn and you can also get all of our content directly in your inbox every day by signing up to our email bulletins here.

12.27 - People are packing up their stands, so it looks as if things are officially done.

Over three days, 7000 visitors and hundreds of exhibitors have attended Windpower 2017. Next year, AWEA's annual conference and exhibition takes places in Chicago, Illinois. We hope to see you there. 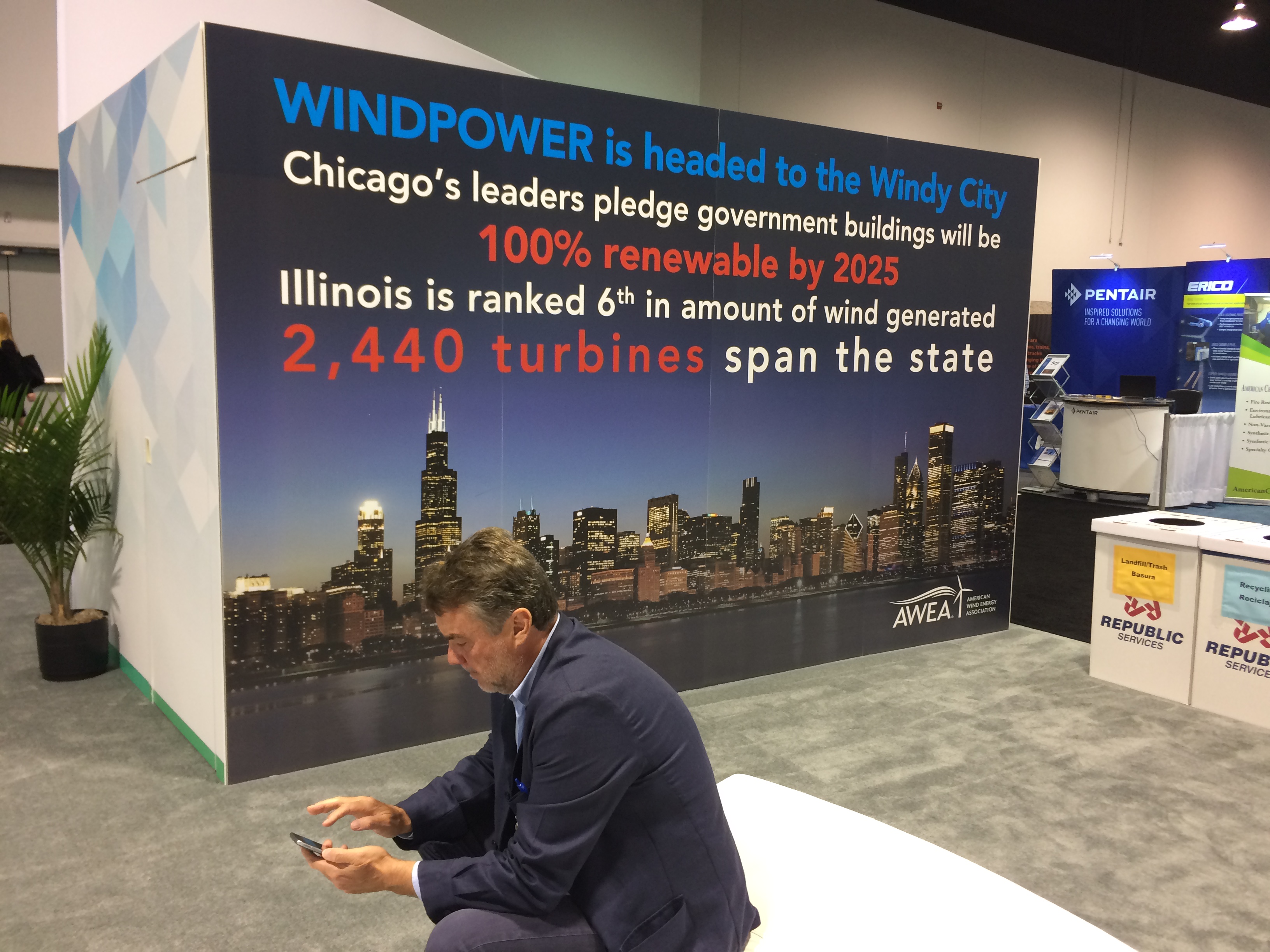 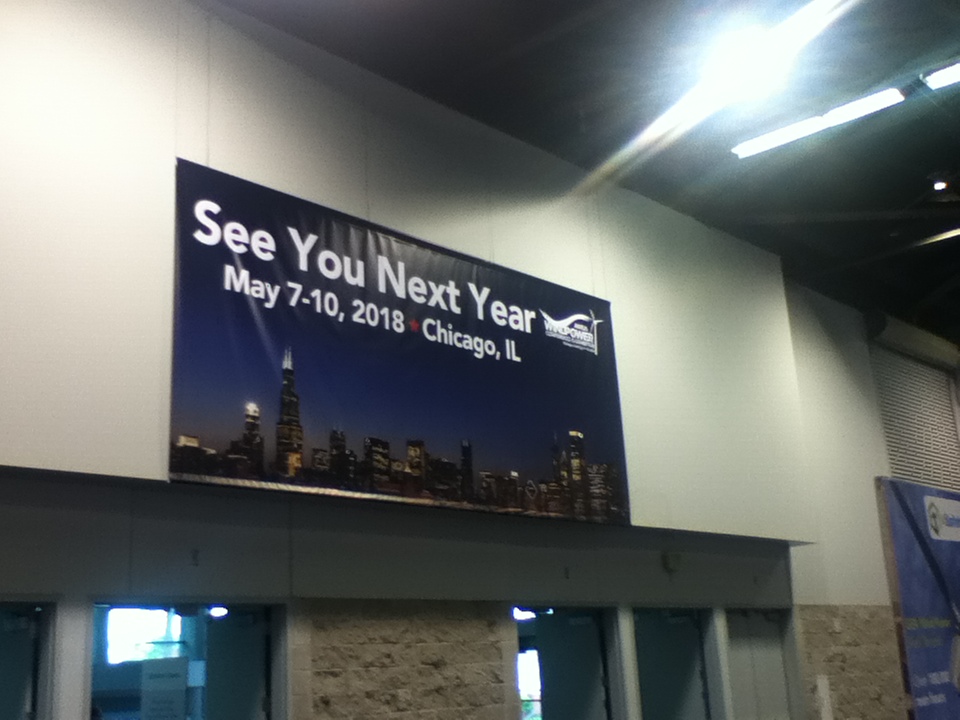 12:12 - SPONSORED CONTENT: As the show begins to wind down, let's hear again from our sponsor.

"Earlier this year, we decided to stand up a renewable energy services franchise. The goal was to take the best of all of our businesses and drive it across GE.

"We have 400GW of installed capacity, closed to 60GW in wind and about 350GW in hydro. So the idea is to take the best of our field services applications, the best of our training, the best of our commercial approach in each of the regions and then represent one face to the customer and one strong execution team," McEntee said at Windpower 2017.

The KidWind Challenge gives middle- and high-school students a hands-on introduction to wind energy by designing their own turbines.

Here, the "Three Windateers" from Toledo, Oregon get their turbine tested: 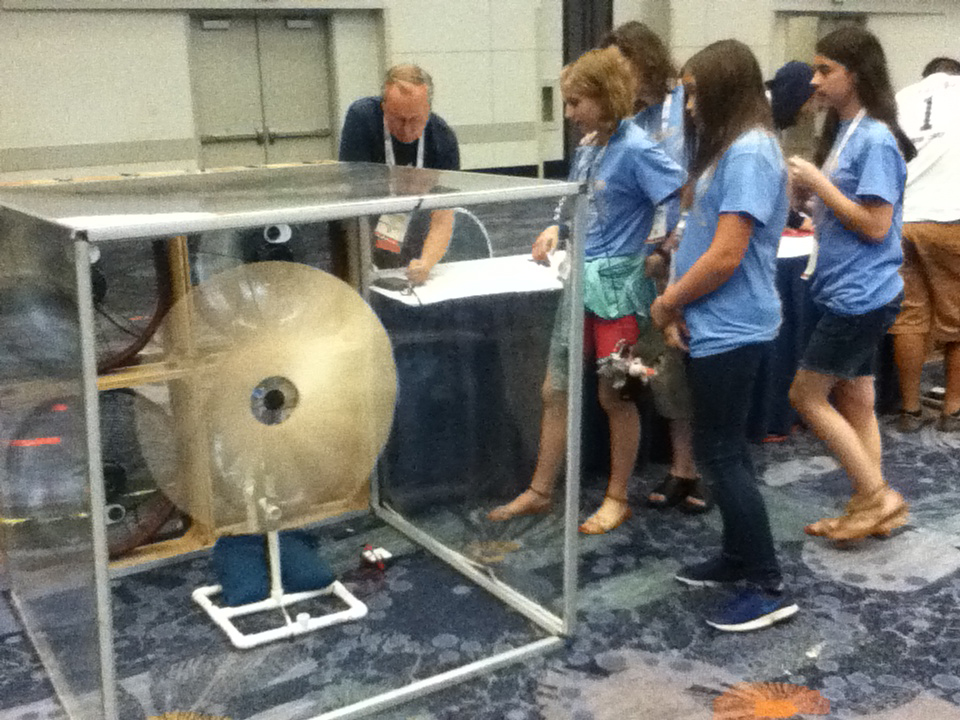 And here, a team from Oxford Elementary School, flown in from Kansas to participate in the challenge: 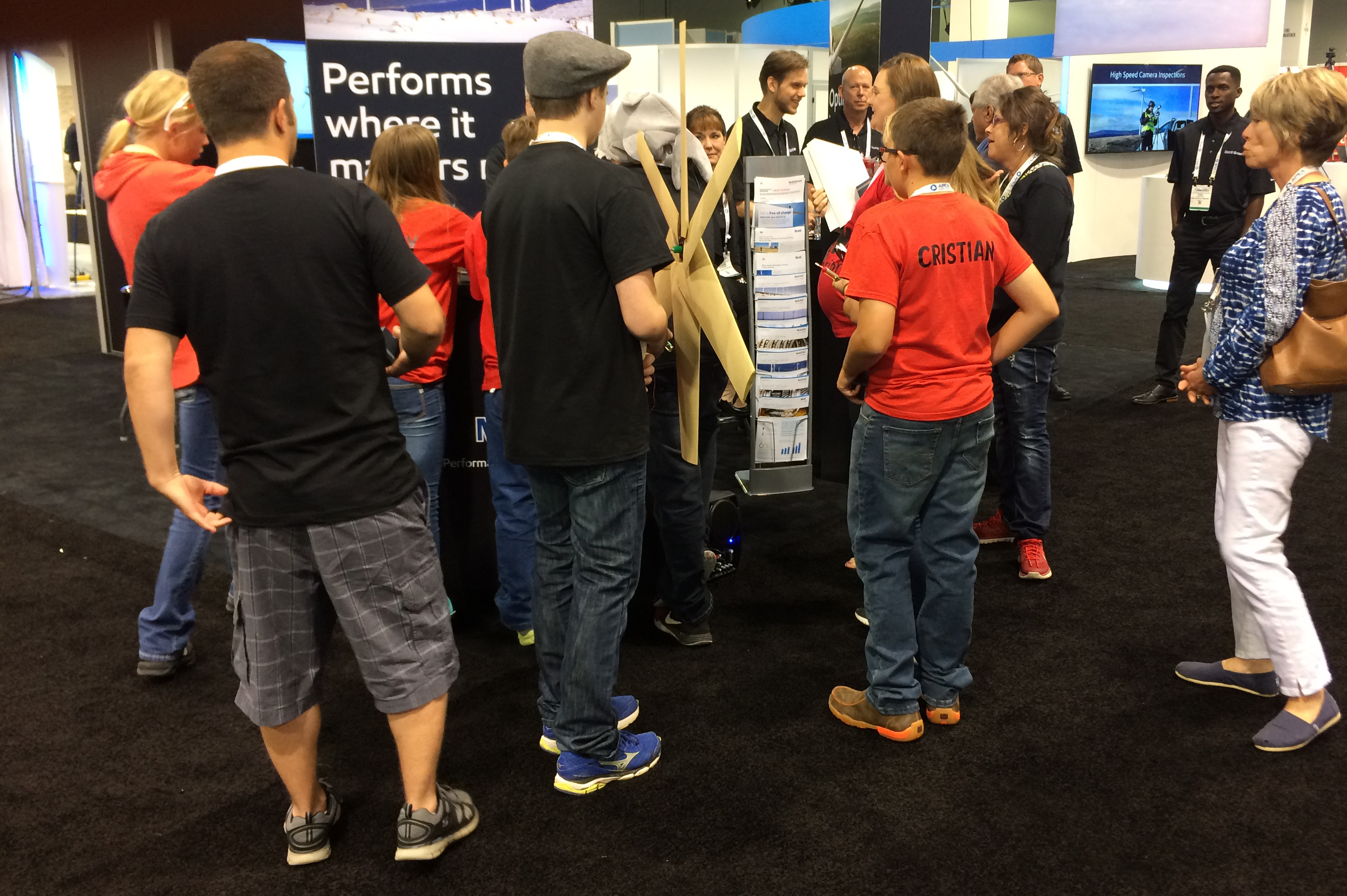 11:53 - Yesterday, Iowa, swore in Kim Reynolds as its new Governor. As part of Gov. Reynolds' remarks, she promised that wind would continue to lead the way in the state.

"We must view our rich, renewable resources in ways never thought possible," she said.

"For years, our fields have fed the world. Now, they energise it. They produce products that fuel cars and they host wind turbines that power our communities and businesses.

"And yet, those fields are filled with untapped potential. Our energy plan will help us continue to lead the way in wind energy and renewable fuels. Working together, we can have the most innovative energy policy in the country."

Wind power supports 9,000 jobs in Iowa, and has invested $13.5 billion in wind farms there, according to AWEA.

11:42 - Interest from commercial and industrial customers in buying wind energy continues to grow, with the number of companies that have committed to sourcing 100% of their electricity from renewables taking a significant jump in just the last few months.

There is still a need, however, to bring smaller companies whose load is not large enough to support a wind project into the market.

"We really have not found the best way to aggregate those small customers," said Southern Power CEO Buzz Miller.

Asked about the mood of the conference, he said there is clearly a sense of pent-up demand and of the coming wave of executing projects.

AWEA has reported that more than 9GW is now under construction in the US and almost 12GW in advanced development.

But, as Hendrickson asks, what will the conversion rate of 'safe harbored' turbines be? How many will be put in the ground?

"Everyone's scurrying around trying to match turbines to homes," he said.

When developers have 'safe harboured' turbines, they have contracts for options to buy them so that they can qualify for the full Production Tax Credit (PTC) which is being phased out. 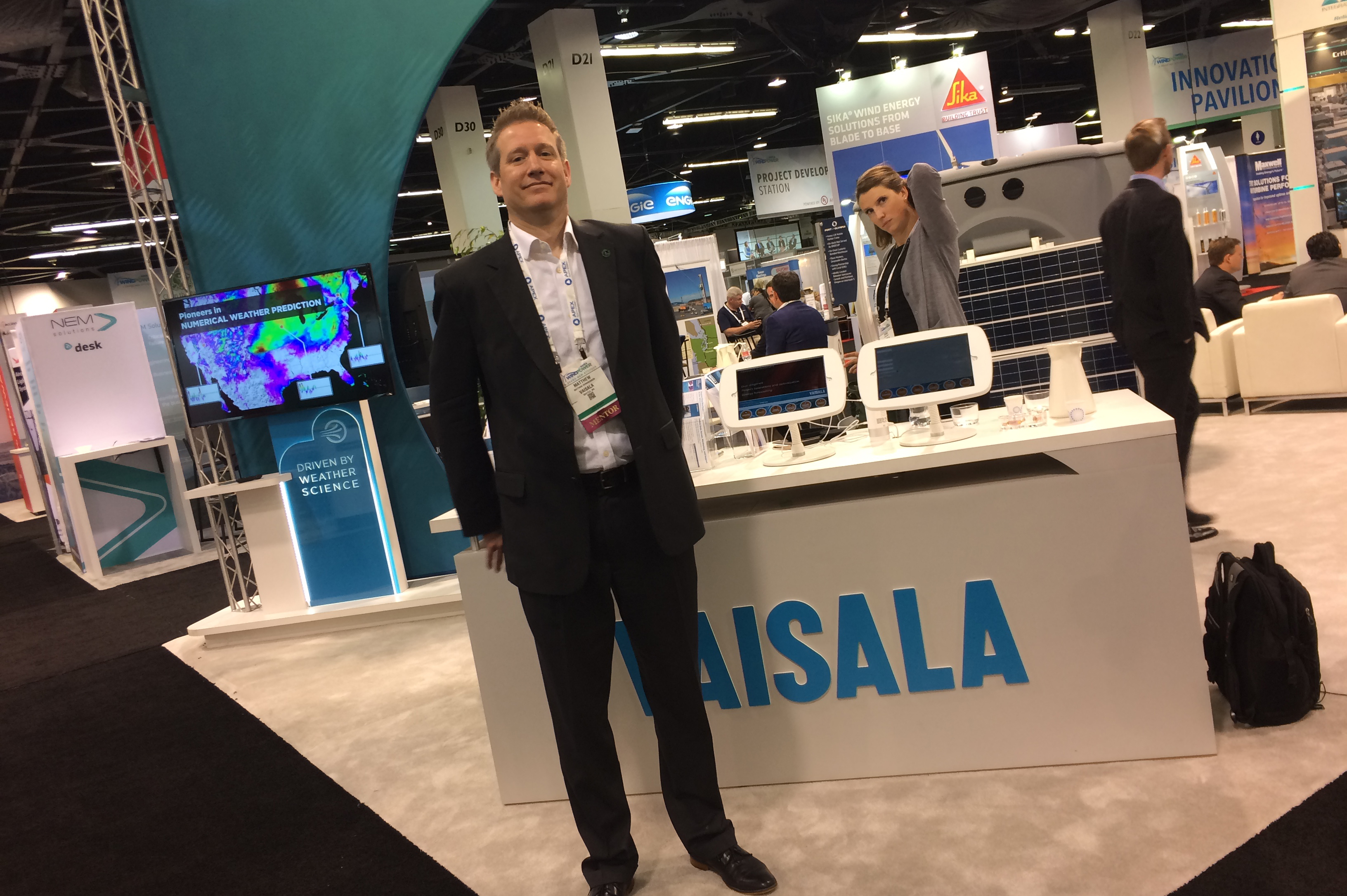 Of the broader mood in the US right now, Hendrickson said: "We will see a strong build-out for the next two years at least."

He added: "There's lots of opportunity and moving parts that centre on questions mostly about the world of power prices that can be secured in PPAs."

Prices have gone down, in some cases, to lower than $20/MWh, he noted. "Some people are getting to the threshold of whether it is good business even with the PTC," he said, adding a note of caution.

The exhibition clearly shows the consolidation of OEMs and other established players, he concluded. "The players here tend to have maturity and years of experience. These companies know how to execute. It is harder for wild-eyed new companies to know how to operate" in the current environment, he said.

That's compared with, say, eight years ago when the industry was booming ever more and new entrants found it easier to break in.

11:12 - Offshore wind in the US is certainly picking up. This morning, developer US Wind has accepted the terms of the lease the Maryland Public Service Commission set out in early May.

In a letter to the PSC, US Wind indicated its acceptance of all conditions. US Wind also provided its 20-year price schedule for the Offshore Wind Renewable Energy Credits (ORECs).

"This is one more step forward on the path to bring renewable energy, jobs and infrastructure improvements to Maryland," said Paul Rich, director of project development.

"We continue our outreach to partners in business, labour and state and local governments to ensure this project provides the maximum benefit for all Marylanders."

US Wind won the US' third federal lease round in August 2014 for a 323-square-kilometre site located about 18km off the coast of Ocean City, Maryland. The 248MW project is due online from 2020.

10:56 - Jeppe Frank, COO of Martin Bencher Group, has been to about 15 annual US wind conferences.

Of the conference he said: "It's been a little bit slow... but we have had a lot of good meetings." The group ships wind components by sea, rail and road internationally.

Frank noted that there is a lot of focus in the US market right now on offshore. The US offshore market has stalled, he said, with the demise of Cape Wind.

But he expects it to pick up in 2019 or 2020. He said that Dong Energy is showing a growing interest, and Siemens Gamesa is looking at making offshore components in the US. 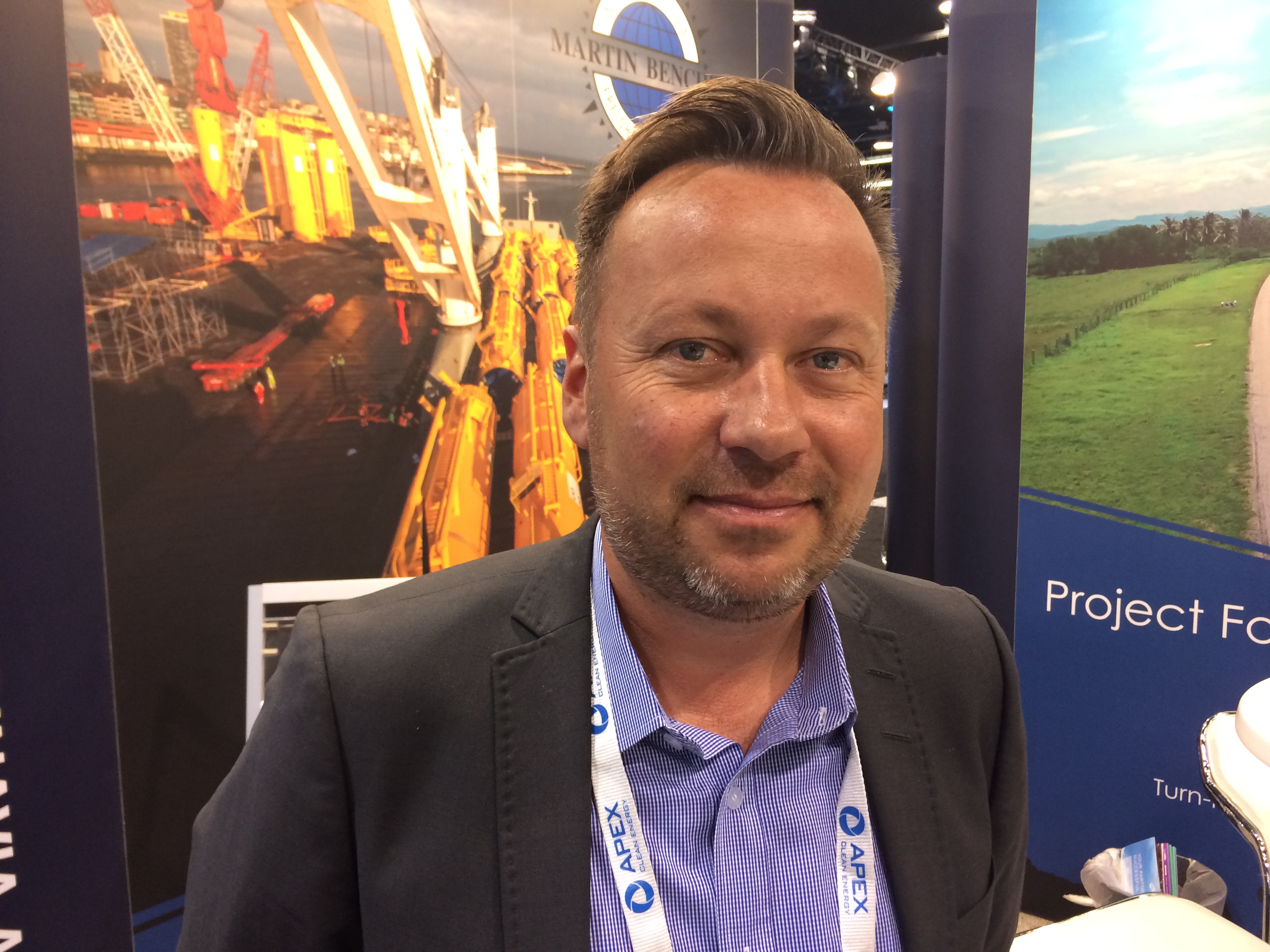 10:45 - Speaking of Trump, Keith Martin, co-head of the project finance group at Chadbourne & Parke, yesterday suggested the odds for an online bet that Donald Trump will win a Nobel Peace Prize this year — for brokering a deal in the Middle East — should be 5%; the odds that Trump will announce the existence of aliens should also be also 5%; and he closed by noting that UK bookies are giving odds that Trump will be out of office this year of 27%.

10:42 - It's important not to overreact to statements out of Washington as utilities plan their long-term generation portfolios, says Southern Power's Buzz Miller.

"Southern plans to invest $1.5 billion a year in renewables over the next five years, and can't be distracted by Trump Administration policies designed to revive coal and step back from climate change commitments.

"You have to cut out the noise — don't chase rabbits as we say — and get on with your business."

10:38 - "Battery storage will be a gamechanger at some point," said Southern Power Company CEO Buzz Miller.

10:24 - The US wind industry needs to shift its attention to state and state policies after an long-standing focus on the federal government and the PTC.

"I don't believe that as an industry we can overemphasize the importance of finding allies among state regulators," said Buzz Miller, CEO of Southern Power.

Part of the process is ensuring they understand wind energy and the role it can play. "There's a lot of education to be done," he added.

10:18 - The session is forward-looking, bringing industry and consumers together to talk about how to drive demand for wind energy once the production tax credit phases out.

The state is losing half of its coal fleet over the next decade and is also facing retirement of a nuclear unit.

Regulators have to look at balancing energy and capacity requirements in the market, but "with potential fuel price volatility for natural gas, wind ins a strong contender," Talberg said.

09:48 - One theme on the floor of the exhibit is cautious optimism, sort of a lull before the expected storm for the supply chain, because of the certainty of the five-year phase-out of the Production Tax Credit.

But for some further down the supply chain, the storm is still on the horizon. Anthony Hale of Copperweld of Tennessee, who are exhibiting, attended last year's show as well.

He said of this year's event: "It's slow right now but everyone thinks it's going to get better."

He noted that potential clients he has spoken with are saying, "We're doing a lot of quotes, but we're not doing any projects yet."

"I'm hoping that next year will be a lot better," he added. Copperweld makes copper-clad steel wire used for grounding. 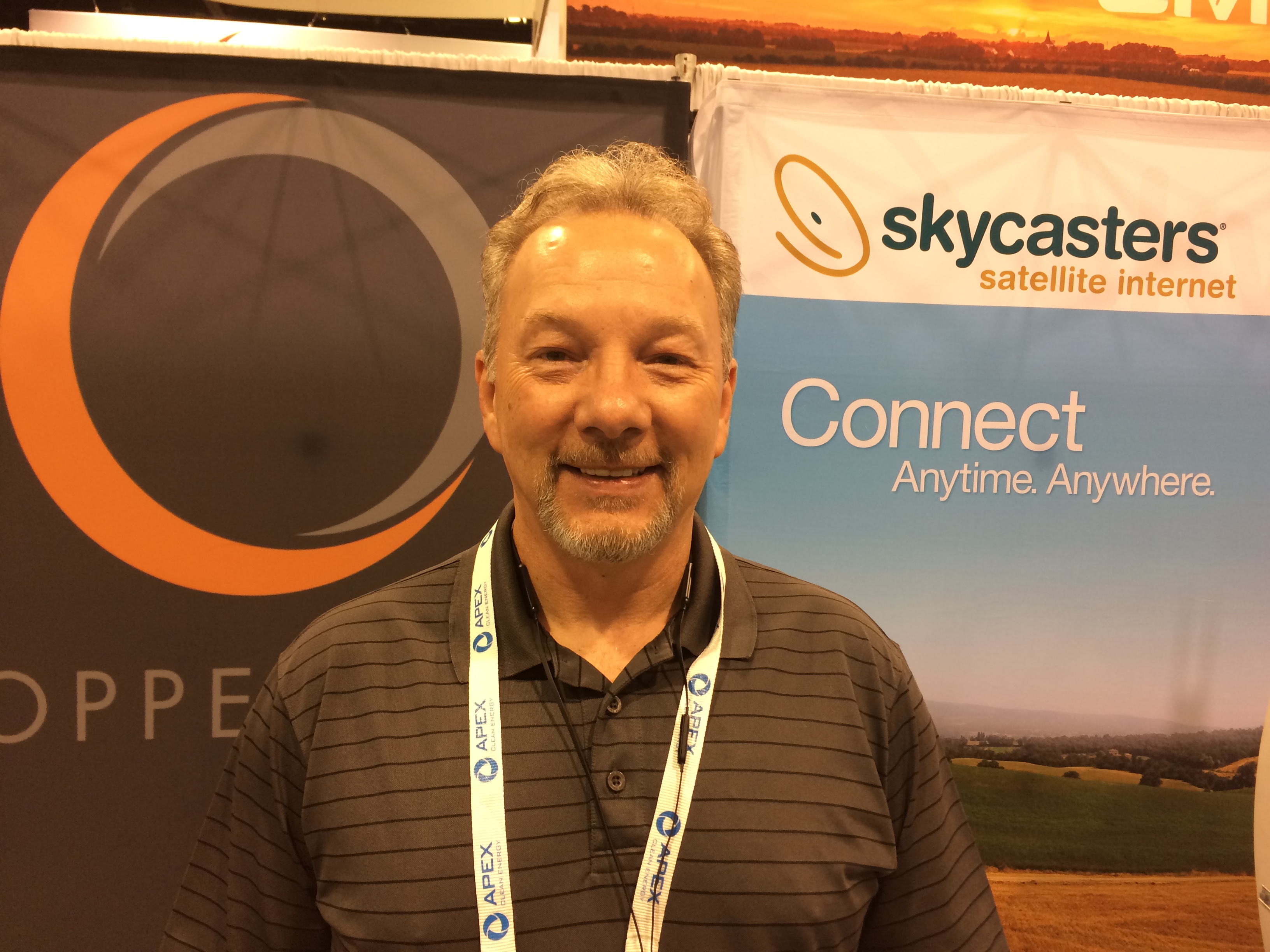 Day 3 @AWEA #WINDPOWER2017! Visit us at B3624 in Hall D to dicuss how #windworks & learn about our growth in the US!https://t.co/3NqdMPWdqh pic.twitter.com/nCb8QG2bBH

09:31 - We begin day three, as usual, with a general session. Today, a panel discuss 'Driving demand for wind energy post-PTC'.

09:20 - The final day is typically quieter, with many of the nearly 7,000 attending having left on 'red eye' and other flights last night.

But some are still networking hard. Adam Smith of Echelon Environmental Energy and his partner Scott Debenham of Debenham Energy LLC were at the Anaheim convention centre as soon as it opened.

They said they had found the conference and exhibit useful. "It's a good time to meet and greet," said Smith, whose first AWEA wind conference was in Washington DC in about 2004, an event that he said was attended only by about 200 people.

"We're in discussions with seven or eight potential development partners," added Debenham, who is working with Smith on getting permits on US Forest Service land across the western US.

They had already been talking with the contacts before the conference. "But here, we can meet face to face. We line up our meetings and give them our spiel," he said.

09:15 - According to AWEA, attendance for the show is around 7,000 delegates, which is on a par with last year's show in New Orleans.

09:06 - Good morning and welcome to the Windpower Monthly live blog — in association with GE Renewable Energy — following all that is happening at the third and final day of AWEA Windpower 2017 in Anaheim, California.

It has been a busy two days so far, with the third day likely to be just as interesting.

You can catch up with the live blogs from day one and day two to see what has happened so far.