As soon as any hard structure, such as a turbine foundation and its associated rocky scour protection, is introduced to the marine environment, various organisms will start to colonise it.

In turn, they will provide a food source for larger creatures and on up the food-chain, leading to the so-called reef effect. Because most turbines so far have been installed in areas of sandy sediments, these hard substrates provide a new type of habitat, attracting species not normally present in that area.

Perhaps more importantly, commercial fishing is banned within most wind farms. This particularly applies to trawling, which has devastating effects on organisms living on or near the sea floor. As such, offshore projects can act as reserves for fish and marine mammals, which are sometimes caught in fishing nets.

There is plenty of evidence to show that offshore wind farms can boost the number of fish species found locally, and their population densities. 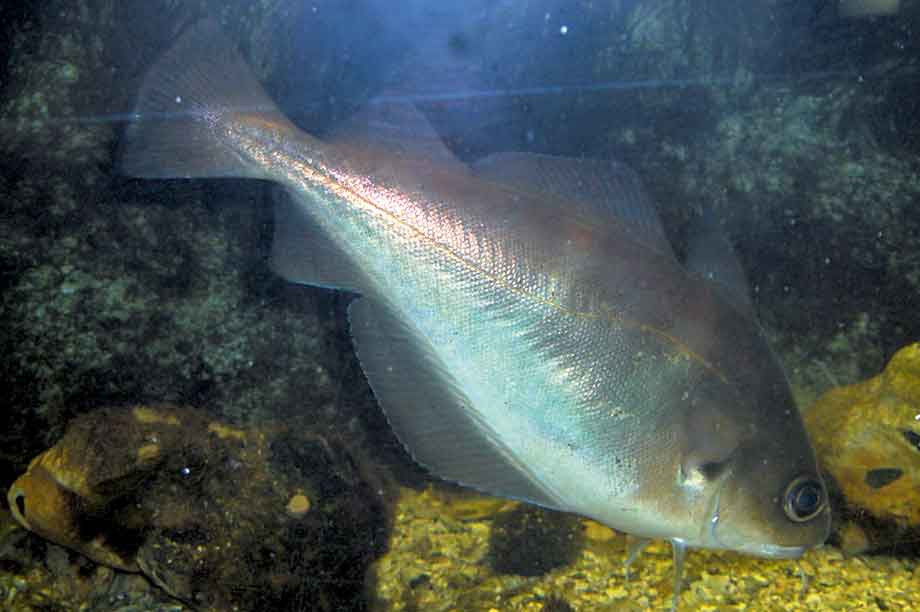 At Belgium’s Thornton Bank project, for example, the number of species registered inside the concession increased from 38 to 47, largely because of a rise in the number of fish species associated with hard substrate, which grew from two to eight. And the number of pouting (pictured right, a member of the cod family) per square metre was estimated to be 104 times higher above the scour protection than in surrounding areas.

Likewise, after the construction of Horns Rev, the Danish Energy Agency found 41 fish species present inside the wind farm, compared with 30 at a reference area outside.

However, that may be only part of the picture, argues Steven Degraer, who coordinates the marine ecology and management team at the Royal Belgian Institute of Natural Sciences. Comparing the benthic organisms (those living in or on the sea floor) before and after the Belgian projects were built, the number of species has tripled, Degraer says.

But if you look at the whole Belgian North Sea, the number of species has not changed at all, he adds.

You need to consider not only the number of species present locally, but the entire ecosystem, its structure and the processes in operation, he argues.

For example, if the local population density has increased, these organisms will be filtering more food and energy from the water column, which may mean there is less available elsewhere. Such questions need to be investigated, says Degraer.

Jennifer Dannheim, a marine biologist at Germany’s Alfred Wegener Institute, agrees that scientists need to consider the function of each species in the wider ecosystem and how they interact. "Biological interactions are complex," she says. "One effect might trigger other changes in the system."

Increased biodiversity and higher associated biomass shed from foundations in the Baltic Sea, for example, may not be a positive move, because some areas of the sea already suffer naturally from oxygen deficiency. Again, the true impact can only be seen if studies are carried out at the ecosystem level.

The issue of non-indigenous species using turbine foundations as stepping stones to enter new areas is another controversial issue. The increased biodiversity may be good at one level, but the foundations can open the door to invasive species or enable them to strengthen their foothold.

One such is the Pacific oyster, introduced to European waters and now competing with the native blue mussel.

This is the argument of Martin Perrot, project leader at Seaboost, which develops measures to help structures such as wind turbines integrate better into their maritime ecosystem.

Given that the foundations reach from the seabed to the surface, "there is an opportunity to develop different types of habitat modules at different depths and ensure the development and vertical migration from the larval stage to adulthood", he says.

Adding such modules to foundations to increase the range of habitats should also help prevent an "ecological trap", where species colonising the foundation do not find the appropriate resources to meet all their needs, Perrot says.

In addition, the new communities are often dominated by just one or two species, such as mussels and barnacles, making them unbalanced. However, modules could be added that attract and shelter more diverse communities with greater resilience, he says.

Seaboost has been working with STX, developing a model for the French marine construction company’s jacket foundation, aiming to maximise the potential benefits of the structure, not just as regards the colonisation of the foundation, but also on a wider scale.

"It is important to consider the possible benefits on a large ecosystem scale and to ask questions about the possible functional support wind farms can bring to vulnerable ecosystems," Perrot says.

All agree that more research is needed — particularly as more offshore projects come online — to assess their cumulative impact alongside other pressures on the marine environment.

This will require what Dannheim describes as a "holistic approach to the management of the marine ecosystem."

At the same time, greater understanding of environmental systems is crucial in order to prevent harmful effects from wind farms.

"If we know more about the ecological functioning of the system, we might be able to make simple changes, such as selecting specific habitats [as the best place to install turbines] or making changes to the foundations," she says