The striking super-compact drive SCDnezzy2 twin-rotor concept represents a radical vision of what large-scale floating offshore power plants could look like by 2025.

The two-bladed rotors counter-rotate to balance the opposing Coriolis forces acting upon them.

Another distinctive feature is that the relative rotor blade position during operation are offset by 90 degrees, meaning that the blades of one rotor are in a horizontal position when the other is vertical.

This aims to minimise the rotor blade interactions that cause tip vortices-related performance loss. 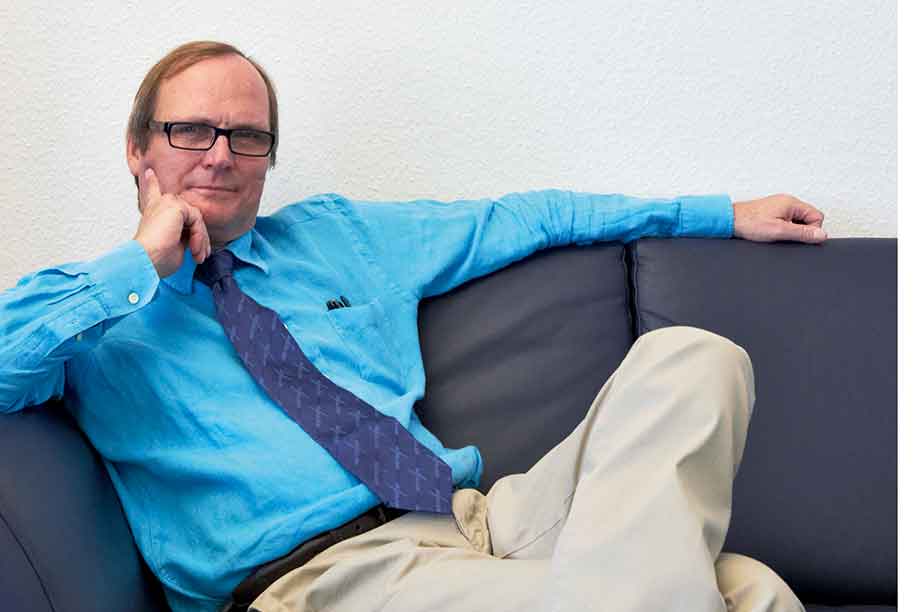 "SCDNezzy2 is focused on IEC I high-wind sites, and our evaluation of many different power rating and rotor diameter configurations showed that around 425W/m2 represents an optimal specific power rating," says Siegfriedsen.

"This translates to 7.5MW installed capacity and a 150-metre rotor diameter. Fitting larger rotors, in our view, would hardly raise annual energy production (AEP), but would result in a huge increase on turbine loads that would especially impact blades, and blade and main-shaft bearings, and thus negatively impact levelised cost of energy (LCOE)."

Each turbine is mounted on a backward tilting tower in the wind flow direction. The ten-degree tower tilting primarily aims to create sufficient cable clearance for adequate load transfer.

The towers themselves feature a droplet shape to reduce wind resistance from a drag coefficient (Cd) of 1.3 for a round tube to only 0.3-0.4Cd. This, in turn, enhances floater stability by curbing movements and accelerations during especially gusty weather.

Together, the two turbine towers form an open V-shape, which is "closed" at the top by a tensile cable linkage creating a compact, light and structurally stiff triangular structure.

This is very different from other floating structure initiatives developed to host two or more turbines. Most of these are characterised by a triangular lattice-tube floater with individual turbine mountings at the outer columns.

The SCDnezzy2 towers meet at a bottom section attached to a central mounting flange column on the concrete floater. This Y-shaped semi-submersible structure is composed of one long leg, two shorter ones, and three inward-facing buoyancy columns.

The upper surfaces of these elements serve as linkage points for the guy wires, supporting and stabilising the towers and turbines. One main benefit of a guyed structural tower design is that it virtually eliminates bending moments, especially in the tower base, resulting in significant mass and cost savings. 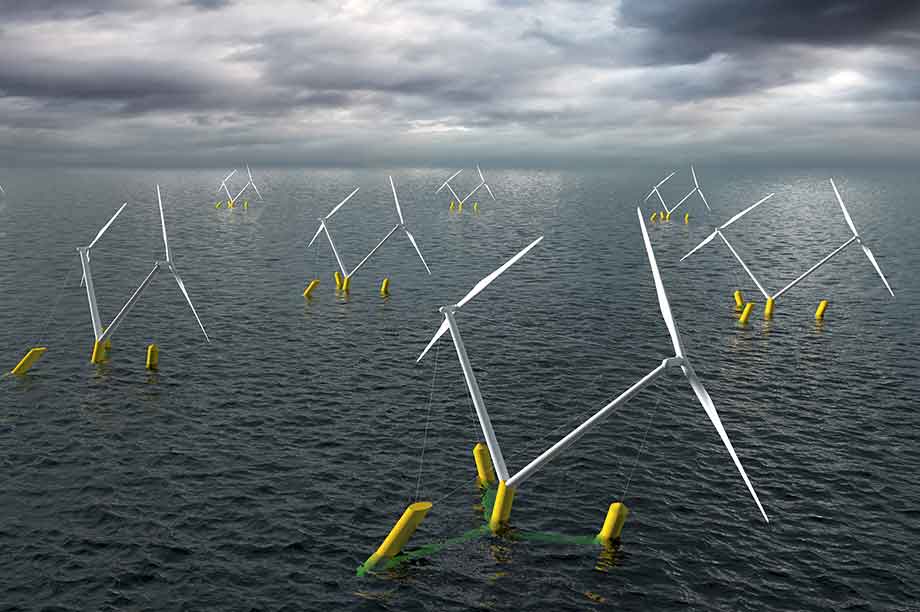 "This solution eliminates the need for individual turbine yaw systems, which is a main SCDnezzy characteristic. New for SCDnezzy2 is that the rotor speed of each turbine can be individually controlled, which provides additional active yaw support capability to the installation's otherwise mainly passive yaw system. With SCDnezzy 8.0MW and smaller sister models, the floater-turbine yaw system is 100% passive."

The idea of using multi-rotor technology is far from new. Early concepts date back to the 1930s and famous German engineer-inventors such as Hermann Honnef.

Their combined efforts resulted in often beautifully detailed large-scale designs, but none of these and only a handful of other multi-rotor projects have progressed to the prototype stage. 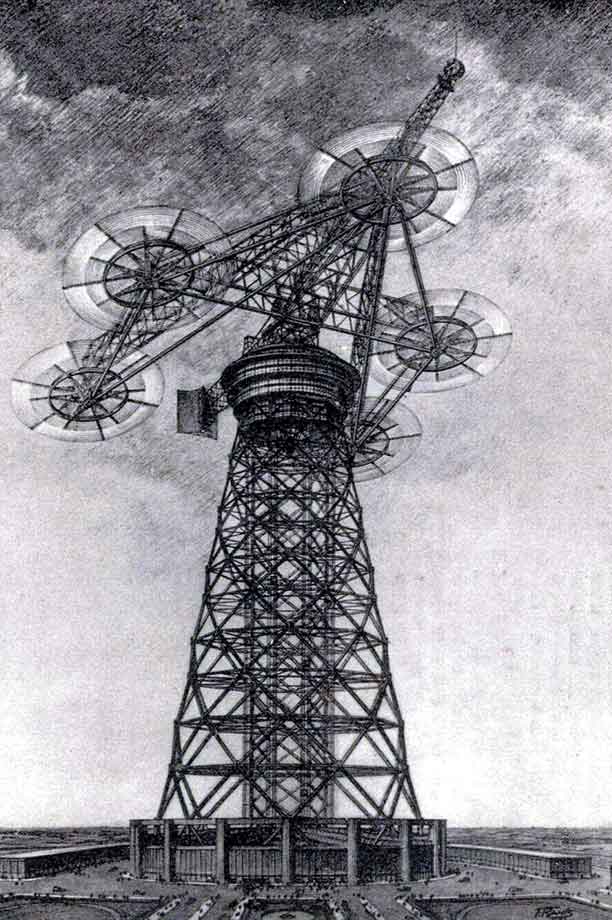 A Hermann Honnef multi-rotor design from the 1930s

The 900kW four-rotor Vestas concept, operational since last year, is the most recent example of a modern multi-rotor development. It is perhaps extra significant because it was initiated by the world's largest wind-turbine supplier.

"We started with preliminary brainstorm investigations with a small core team after Hamburg WindEnergy 2016, following interesting discussions with various experts on this theme," says Siegfriedsen.

"Initially both twin-turbine and triple-turbine configurations were considered, but we finally decided that a two-turbine concept offers perhaps the best compromise solution."

He concedes that a disadvantage of multi-rotor turbines is their larger number of components. But, on the other hand, they offer distinct benefits, not least that smaller-size turbines are often already well proven, while the greater number of parts is offset by the fact that they are smaller and cheaper.

"If we had decided to scale up a 7.5MW SCD turbine with unchanged specific power rating to 15MW, head mass would increase by a factor of 2.6 instead of 'only' doubling as with the SCDnezzy2 solution. Rapid mass increase is inherently linked to turbine scaling, better known as an inevitable consequence of the infamous square cube law," he says. (See below)

Assuming a specific power rating of around 425W/m2, the rotor diameter of a 15MW single-rotor turbine, would be roughly 212 metres. SCDnezzy2 features 150-metre rotor diameters, which allows lowering the centre of gravity by around 30 metres.

"The combination of reduced head mass, lower centre of gravity, and some additional benefits limits the floater cost increment to only 25-30% over a single-turbine SCDnezzy 7.5MW," says Siegfriedsen. 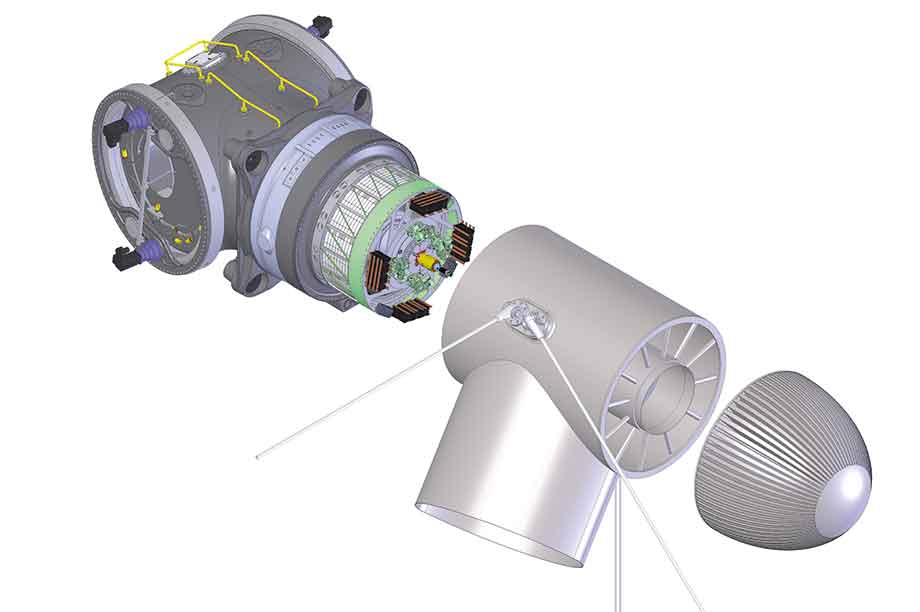 Bench testing of a further optimised 3MW SCD turbine was successfully completed in May at the RWTH technical university in Aachen, Germany. "We are a wind-turbine and main components developer, so actually building the hardware ourselves was rather new to us," says Siegfriedsen.

"However, the entire process from building moulds for castings, component procurement, turbine assembly and testing went smoothly, and could be completed within 14 months after receiving the order last year in April."

"At least 80 SCD 3.0MW turbines operate in China through our former licensee Ming Yang, as well as an SCD 6.0MW offshore turbine since 2014," says Siegfriedsen.

"The Aachen bench testing outcomes positively reflect upon the 6MW design with 140-metre rotor, which can now be upgraded to 7.5MW, plus allowing parallel rotor enlargement to 150 metres."

The SCD 3.0MW unit was ordered by the Japanese New Energy and Industrial Technology Development Organisation (NEDO). The organisation specifically wanted a two-bladed turbine for a floating project in Japan, where it will be mounted early next year on an Ideol floating structure.

"This SCD 3.0MW version operates upwind, as it is purpose-built for the Ideol floater. The turbine incorporates a three-roller yaw bearing with higher load bearing capability, a modified gearbox lubrication system, and strengthened blade bearings to cope with floater-turbine-nacelle inclinations and accelerations during operation," he says.

SCDnezzy technology focuses on minimising floater movements to a maximum inclination of 3.8 degrees and 0.4G maximum accelerations. These results were validated last year with a 1:36 scale SCDnezzy floater at a wave basin in Cork, Ireland.

Siegfriedsen believes that a 1:36 scale test with a SCDnezzy2 model could be feasible this August. The next step is likely to be a full-scale SCDnezzy2 fitted with two 3MW turbines.

"This is our current plan, and we could, in principle, build another two turbine units within a six-month period," says Siegfriedsen.

"An alternative pathway towards commercialisation is starting with a full-scale SCDnezzy 3.0MW for the necessary technology validation testing in the water. The Atlantic coast of Ireland provides a possible test location offering perfect wind and wave conditions.

"The 1:36 scale model was successfully tested in scaled wave heights up to 30 metres, which are not uncommon in the Atlantic."

On the future of SCDnezzy2, Siegfriedsen draws a comparison with his company's 5MW Multibrid offshore concept presented at the Hannover Messe trade fair in 1997. At that time, nobody really knew how to design such large turbines, but two initial licensees were found for commercialising the technology.

"Our SCD successor turbine concept presented at Husum in 2007 has also become mature commercial wind technology. SCDnezzy2 will be introduced at the offshore wind conference in London (in June), and hopefully it will also inspire new potential clients. With the right partners and sufficient financial backing it could become realistic to realise a market-ready 15MW floating power plant in 2025 or earlier."

The main practical implication is that when rotor diameters grow, head mass increment is much faster.

SQL-impact can be minimised through using lighter and stronger materials, technology innovation and general advances, and by deploying the latest design and modelling tools.

These factors explain the quoted scaling related mass increment by a factor of 2.6 instead of 3.0.