The dark blue Toyota Mirai (Japanese for "future") parked outside the offices of ITM Power in Sheffield, northern England, is a rare beast. At the time of writing it was one of just 28 fuel-cell cars on the road in the UK, pioneering the use of hydrogen to power private and public transport.

This particular model is especially rare because its hydrogen cells have been generated from wind power. Although hydrogen can be produced from reformed gas or biomass, the preferred method is to synthesise the gas from water using electrolysis, which requires electricity. The cleaner the source of electricity generation, the cleaner the car. The only tailpipe emissions from fuel cell cars is water.

The Mirai has been working on the morning of my visit, ferrying visiting delegations from the US, Germany and Japan between ITM Power's office and its laboratory, a 15-minute drive away. It is the obvious way for a company at the forefront of developing and commercialising hydrogen electrolysers for fuel cell cars to demonstrate its technology, says Rachel Smith, executive director of ITM Power, and who has been with the company since 2002. 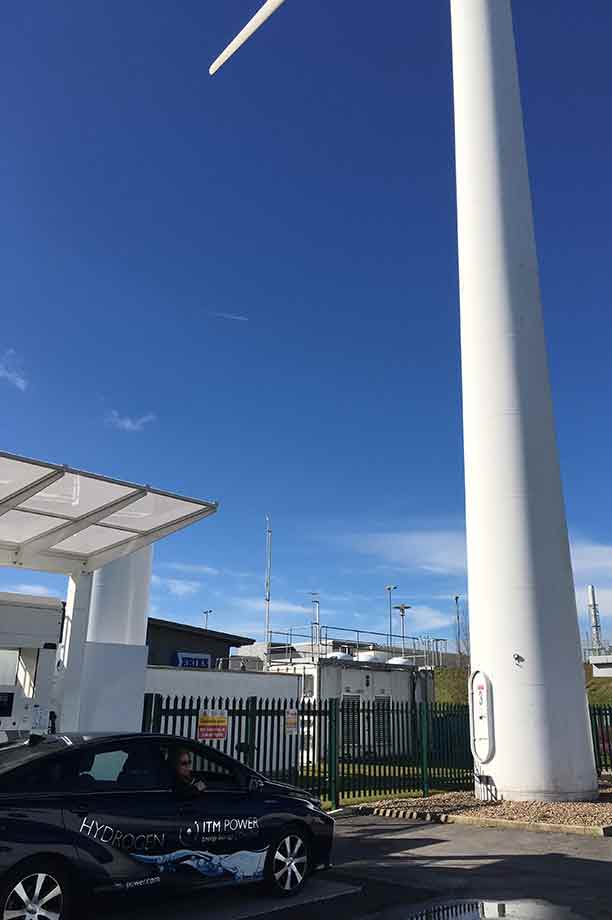 I take the Mirai's driver's seat for a short test-run to the company's hydrogen mini-grid at the nearby advanced manufacturing park, easily spotted from a distance by its 225kW wind turbine.

This is coupled directly to an electrolyser, 200kg of hydrogen storage, a hydrogen dispensing unit and a 30kW fuel-cell system.

This arrangement is designed for energy from the wind turbine to provide power for some of the buildings on the site, with excess energy used by the electrolyser to generate hydrogen. The gas is then compressed and stored, ready for dispensing into fuel-cell vehicles.

The turbine is turning at full tilt over our heads as we pull up at the hydrogen fuelling station. There are two "pumps", one for 700-bar pure fuel-cell cars, like the Mirai, the other for 350-bar hybrids.

The nozzle is heavier than a fuel pump's, but once locked over the fuelling valve and the start button pressed, it's all hands free. And there are no fumes, no greasy residue on your hands. It's surprisingly quick, too, taking just a few minutes to charge from empty, unlike most battery electric vehicle (EV) chargers installed today.

The range of fuel cell cars is also better than EVs. The Mirai can do around 550km on a full 5kg tank, which costs about £50 to fill up. In rough terms, that is equivalent to a petrol-powered car with a real-world fuel consumption of 7.58 litres/100km (37 miles per gallon). at current UK pump prices (£1.20/litre).

Before heading back to the main offices, Smith guides me around the company's laboratory, where 20 of ITM Power's 65 staff work. Tall tanks of purified water connected to electrolysers bubble away, while a table-top display shows the various prototypes and iterations of the electrolysers developed.

"The advantage of having all this under one roof means promising research and development can be scaled pretty quickly," says Smith. "At a university, you sometimes wonder when the research you do is going to be applied. At ITM Power we do everything, from the lab through to production."

Wind power is key to the company's strategy, says CEO Graham Cooley, outlining plans for a 1MW system on the Orkney Isles. "The wind is an incredible resource up there, but there's no grid connection, so curtailment occurs a lot." The system will produce hydrogen from excess wind, which will be shipped to mainland Orkney for refuelling cars and heating.

"The oil and gas industry is comfortable with hydrogen because it is used to shipping liquid natural gas around," says Cooley. "It fits neatly into that industry's existing infrastructure.

As part of a partnership with Shell, ITM Power has installed refuelling points on one of the petroleum giant's forecourts in southern England. Others are in the pipeline, including one in Beaconsfield that will be the first station to house hydrogen and conventional fuels under one canopy.

This is a significant development because it allows the "hazard zones" for petrol, diesel and hydrogen to overlap, enabling closer location, and so increasing the availability of hydrogen refuelling points.

Toyota's commitment to developing electric drivetrains has been the real driving force in this venture, rather than the vague interest of the fossil-fuel companies, but Smith is positive about the Shell partnership. "By working with them we can achieve the visibility the technology needs.

One of the biggest barriers preventing the adoption of fuel-cell cars has been the lack of infrastructure for refuelling. That is starting to change," she says.

POWER TO GAS — APPLICATION TRANSITIONING TO A HYDROGEN ECONOMY

Transportation, electricity and heating networks all face the same challenge: to decarbonise significantly and quickly.

Making hydrogen from surplus electricity generated by variable renewables, like wind and solar, creates a carbon-free fuel whereby a stack of electrolysers use electricity to split water into hydrogen and oxygen.

Hydrogen can be compressed and stored, and used to provide fuel for cars and heavy transport vehicles. A growing number of governments, including the UK's, are funding efforts to decarbonise heavy transport, such as urban buses, and support the roll-out of refuelling infrastructure.

This could lead to more microgrids, where renewable energy generated onsite provides electricity for a local network of buildings, with the excess converted to hydrogen and stored at a nearby refuelling point.

Hydrogen can also be injected into the existing natural gas grid. In Germany, ITM Power is part of an extensive project with other companies, led by the Thuga Group industry association.

The partners are developing a power-to-gas value chain to test the practical application of hydrogen on the gas grid. ITM Power's hydrogen electrolysers, based on proton exchange membrane (PEM) technology, are at the heart of this platform.

The electrolyser converts electrical energy coming from renewables and other sources into chemical energy. A gas mixing plant ensures that the proportion of hydrogen in the natural-gas stream does not exceed 2% by volume when a natural gas filling station is situated in the local distribution network.

According to the Thuga project's analysis, energy-storage requirements could reach 17TWh by 2020 and could be as high as 50TWh by 2050. The gas distribution network can easily absorb these quantities.

As more renewables are added and old thermal generation plants are retired, the requirement for grid balancing is growing, where electricity is injected into or taken out of the grid on a second-by-second basis.

In the Thuga project, ITM Power's fast responding PEM electrolyser stacks are enabling the platform to provide grid-balancing services in the secondary-control market, adding another revenue stream for hydrogen.

When there is a surplus of electricity on the grid, at the request of the grid operator, the electrolyser's load is increased, enabling the hydrogen plant to absorb excess power and convert it into hydrogen.