Data from the first three Enercon EP4 prototypes, installed in 2016, have already led to an upward shift in specification for production models.

Both versions of the big, new direct-drive turbine have been upgraded for operation in higher wind-speed sites.

"The E-141 has one of the onshore wind industry’s largest rotors, offering a competitive specific power rating of 269W/m2. But with this IEC IIA upgrade, it’s now available for medium-wind sites, too."

The 4MW-plus onshore class is limited to a handful of products. Probably the closest IEC IIA competitor is the 4.5MW Lagerwey L136, also a direct-drive development, but with a 136-metre rotor diameter for a specific power rating of 310W/m2.

In IEC IA, the only real rival to the E-126 EP4 (332W/m2) is the just-announced Vestas V117-4.0MW (372W/m2), but this is something of a niche product, apparently aimed specifically at high-wind markets with height restrictions.

By the end of February, six E-126 and two E-141 EP4 turbines, including three prototypes, were in operation, forming the vanguard of a concerted ramp-up in production, with around 80 E-141s and 70 E-126s planned for this year.

Those are high numbers when you consider that Enercon has installed fewer than a hundred of its 6.0-7.5MW EP8 past model onshore turbines since 2007, 38 of which were accounted for by one Dutch project.

But the EP8 was designed for maximum energy capture; the EP4 focuses on optimising the levelised cost of energy (LCOE).

Don’t expect to see too many installations of the new machine in the early part of the year, says Hildebrand. In moderate-climate markets such as northern Europe, unpredictable and poor weather conditions in the spring can stretch construction time and raise costs.

We are victims of precisely those conditions with the scheduling of blade installation on the second E-141 machine at a four-turbine project in Lehe in the north-west German state of Lower Saxony.

Strong winds delayed the operation by two weeks, leaving the installation team waiting, on standby to start work at any time, day or night, weekday or weekend.

The team had already installed the tower, nacelle housing, generator and hub — activities far less critical to wind speed. However, we had another long morning and most of the afternoon before the wind calmed sufficiently to allow safe single-blade hoisting.

By contrast, Enercon developed a straightforward solution comprising only two pre-manufactured holes in the skin made at the blade’s structurally strongest part, and two ropes (slings).

Each hole has a pre-determined distance relative to the blade’s centre of gravity, and one end of each sling is attached to a temporary internal connection point, approachable from inside the blade. The sling outer ends form a triangle for crane hook attachment.

When a blade is lifted off the ground, it remains fully horizontal and perfectly stable. After installation, the holes are closed from the inside, and, if disassembly is required the procedure is carried out in reverse order.

Before installing the first blade, the nacelle is turned into the required position relative to the blade storage position and preferred wind direction. The hub is then also turned to bring one of the three electro-mechanical units into the required horizontal position for blade mounting.

Single-blade installation on direct-drive turbines generally requires special measures to enable slow turning of the hub. To install the second blade, Enercon utilises the mass of the first blade plus the (still attached) hoisting system.

For the third blade, an in-house developed tool is temporarily attached to the hub to allow the final 120-degree rotation.

The next generation (NG) concrete-steel hybrid towers are distinguished by a much reduced base diameter, and standardised cylindrical and coning concrete and steel elements.

The steel top section starts with a longitudinal 120-degrees subdivided segment with a 5.0-metre base diameter, which is assembled on site with a bolted connection. Next come two cylindrical tubular-steel segments, each with identical flange mountings and a maximum 4.2-metre diameter for easier transport.

"The key benefit of the NG concept is that it allows the manufacture of different tower variants on the same production lines, plus easier and cheaper parts storage," says Hildebrand.

"Additional advantages include enhanced process efficiency and much easier transport logistics and installation. We have already installed several NG towers with 3MW E-115 turbines, and experiences are very positive, especially regarding a much-reduced installation time."

NG tower ramp-up for the EP4 platform is now under way, and Hildebrand expects the company to install 40-50 units this year.

Only the E-141 will get the 159-metre hub height tower initially, which corresponds to an installation tip height of 229.5 metres, with the first installation planned in May.

The focus on modular design, and component and system standardisation, is reflected in the huge electrically excited ring 4.2MW generator with an 8.75-metre stator outer diameter.

Produced in Magdeburg, Saxony-Anhalt, and identical for both models, they arrive at construction sites in two 180-degree segments for ease of transports and are assembled on site prior to turbine mounting. 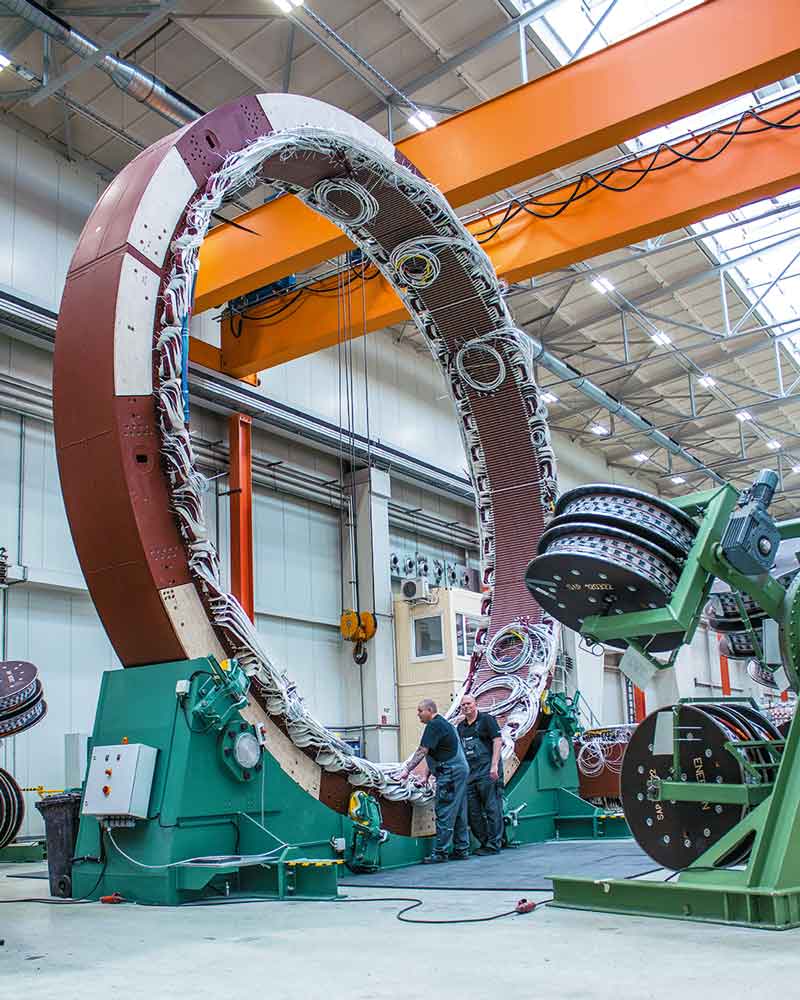 The inner and outer sections of the slender 66.7-metre segmented blades also arrive separately at construction sites and are pre-assembled with patented bolted joints.

The mass of these blades is about 32 tonnes, split evenly between inner and outer section. The serrations at the outer blade trailing edge, claimed to reduce aerodynamic sound level by 2 dB(A), are clearly visible.

The differences between the new full-composite blade and the classic 59-metre steel-composite design fitted to the 7.5MW E-126 EP8 are easy to see. The shorter EP8 blade is wide and heavy, comprising a stiff 35-metre glass fibre-reinforced epoxy outer section.

It is bolted to a heavy, cone-shaped 24-metre steel inner blade with add-on aluminium cladding forming the aerodynamic spoiler.

Both in-house blade generations feature the familiar Enercon winglet at the blade tip, but because the EP4 blade tip section is more slender, the winglet has reduced matching dimensions too.

Another main difference is the strong pre-coning of the E-141 blades, which do not contain carbon and could show higher deflection under load compared with blades of equal length that do. Pre-coning itself aims to prevent blade tips from hitting the tower during adverse operating and weather conditions.

The Enercon-owned Demag-Terex caterpillar-type installation crane at the construction site is the wind industry’s largest and heaviest. It was once a crucial installation tool for the 7.5MW E-126 EP8 and is now deployed for installing EP4 turbines, in parallel with a number of smaller cranes.

The manufacturing process is based on an innovative wrapping technology, which involves a rotating core (plug) and a moving vehicle on a rail system fitted with multiple rolls of glass-fibre strands and a resin reservoir.

This device continuously moves along the entire core length and, in a computer-controlled pattern, wraps pre-soaked strands in layers around the core.

"We developed the wrapping technology in close cooperation with third-party specialists," says Hildebrand, while explaining the process outside the gate-protected working area.

"We apply the same modular wrapping machine for both E-115 and EP4 inner blades in a four-shift, six-day system, and only plug diameters and lengths are different.

"One ready blank constitutes the inner-blade load-bearing structure, and consists of a circular shape at one end for pitch adapter mounting, and a semi-oval shape at the other for outer blade joining."

It takes about eight hours to complete a 12-metre E-115 blank. This increases to 12–16 hours for the 17-metre EP4 blank, says Hildebrand.

The manufacturing processes for the different blanks does not differ substantially, but the real complexity lies in the process parameters. 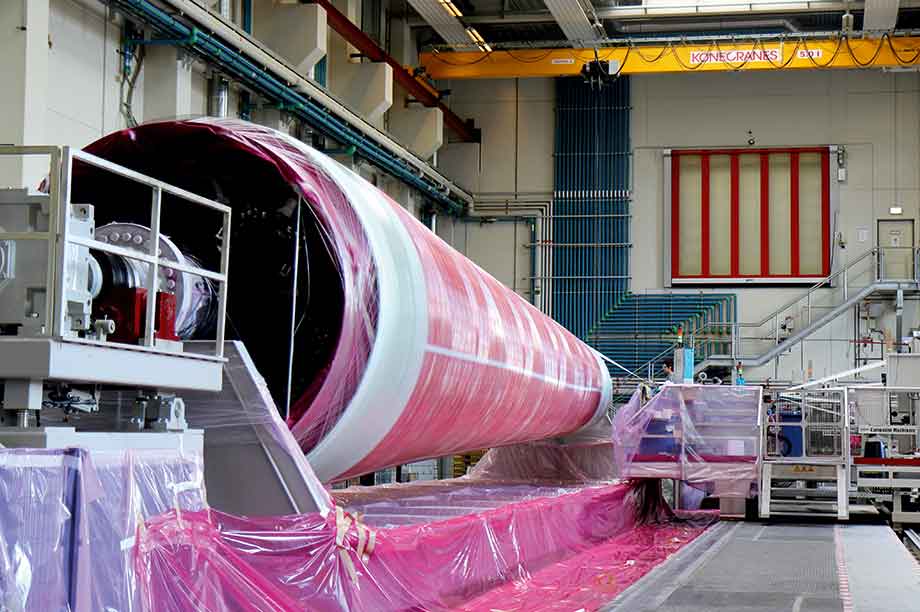 "We are currently in the optimising phase, and this means, for instance, that the core does not rotate at its maximum speed yet to prevent the inclusion of imperfections, especially wrinkles and waves in the ready glassfibre and epoxy matrix," he says.

"Other parameter variables include the thickness of glass strands, and fine-tuning the resin composition. The key objective is to obtain a stable, repeatable process."

The next process sees the blanks machined to a very high degree of accuracy, especially for flatness and smoothness, at special 24-metre long work stations developed with Czech industrial group Skoda Works.

Each of these is equipped with two rotating tools for milling, grinding and polishing joining contact flanges, and drilling holes to make slots.

In other areas within the plant, the huge EP4 aerodynamic spoiler section is produced in three sections, and together with Enercon’s integrated flat-back spoiler, this is precision-bonded with the blank to create the final airfoil structure and shape.

Another advanced automation feature is the glueing robot. This applies the 650kg of glueing paste, that hitherto had to be applied manually before attachment of the spoiler.

A combination of EP4 inner blades and E-141 outer blades is manufactured in Enercon’s home town of Aurich, Lower Saxony, at KTA, a state-of-the-art blade plant with automotive-type line production and a high degree of production automation.

This plant operates with an eight-station system, with vehicles equipped with blade gripping and component rotation capabilities and capable to move cross-wise.

"The lowest possible LCOE remains the key overall driver, and each individual technical or other potential change is judged against it," says Hildebrand.

"At component and systems level, we have many ideas for further optimisation. One is to substantially reduce mass of the inner blades by switching from a full glass-epoxy structure to a sandwich design by integrating, for example, balsa wood.

"We are also considering further developments in the areas of blades and towers," he adds. The current sizes and solutions are definitely not the final ones we will produce."

Enercon is currently the only wind turbine manufacturer in the world offering a platform for 30-year design life.

Meeting such a challenge for the new EP4 represented a major challenge for Enercon’s 800-strong research and development team, often resulting in solutions that are not yet common in the wind industry.

"We introduced our own bearing solution in 2002 for the 4.5MW/6MW E-112 series, and it has proven itself ever since," says EP4 programme manager Arno Hildebrand.

"But we are considering a switch to load-based IPC. Both solutions mean inherently higher pitch-action frequency, but we are convinced that the additional lifetime requirements can be fully met by our electro-mechanical units."

Another example is a special nose cap with infused anti-erosion foil that is attached over the entire blade leading edge.

How has the market responded to Enercon’s decision to produce a turbine aiming for a 30-year operating life? Will other makers follow suit? "We’ve received generally favourable responses," says Hildebrand.

"But we are getting questions from clients on its practical usefulness, especially in markets where support schemes only cover the first 15 years of operation."