GCube's report focused on the developed markets of Europe and the US, but resource under-performance is also affecting emerging markets, storing up potential problems for the future.

"We are starting to see some evidence that the developing countries are set to have all the same under-performance problems we had in the US as we were going up the learning curve," warns Pascal Storck, head of renewable energy at weather monitoring firm Vaisala, in the report.

The main cause for concern in emerging markets is inadequate wind-measurement campaigns. It is, of course, vital that the campaign is designed to give as accurate an estimate as possible of future production.

If it is wrong, and the project under-performs, there is a risk of serious financial loss.

"A 20% drop in wind resource over six months leads to a 40-50% reduction in energy production," points out Geoffrey Taunton-Collins, weather risk analyst at GCube. On the other hand, if the estimates are too conservative, the project will face higher finance costs, or may simply never be built.

And the situation will be exacerbated in some emerging markets where there are just one or two large projects. "They carry significant resource risk because they have all their eggs in one basket," says Jatin Sharma, GCube's head of business development.

The standard length of a pre-construction wind-measurement campaign is one year. But that is based on the European experience, where it is possible to verify data by correlating it with nearby weather stations, often at airports.

Relying on just 12 months' data carries what Sharma calls a "real risk", which is heightened in some emerging markets, "where there is very little proxy verification because of how remote some of the sites are", he says.

Not allowing sufficient time may be due to a lack of experience or to over-enthusiasm, with governments keen to see rapid deployment of wind energy.

"Jordan was a classic case," Boutin says. In the first round of Jordan's direct proposal system, bidders were initially required to reach financial close in just six months.

Other examples are Saudi Arabia's plan for a 1.7GW wind tender, run by the King Abdullah City for Atomic and Renewable Energy, which was subsequently abandoned, and Egypt's current feed-in-tariff.

As a result, developers are forced to bank projects without adequate wind data, which increases uncertainty as well as the cost of finance, Boutin explains.

Another reason for inadequate resource assessment is failing to invest enough upfront, especially in emerging markets, where the developer may be undecided about how serious the investment is.

They might use only a single met mast or opt for cheaper equipment, good enough to secure financing but not necessarily yielding the most representative and reliable data. This can prove a false economy.

Analysis by developer and advisory services firm Wind Prospect showed that spending an extra £50,000 on the campaign — using better equipment, higher met masts, better modelling and multiple measurement locations — could yield a return on investment of £1.78 million after ten years of operation.

Some of these issues can be tackled by first creating a national wind atlas, as long as it is well designed, with no compromise on quality, says Jake Badger, head of the wind resource assessment section at DTU Wind Energy.

He cites the Wind Atlas of South Africa (WASA) as a good example, in which the South African National Energy Development Institute (SANEDI), with South African partners and DTU, has engaged with national laboratories and other stakeholders from the outset, capacity building in key institutions (see box).

If done correctly, a wind atlas not only provides planners and project developers with high-quality reference data, but allows them to estimate the resource anywhere in the country with a known level of certainty. As such, a national wind atlas can provide "a launch-pad for the whole wind-energy sector," Badger says.

To the north, the World Bank is setting up a similar network of met masts in Zambia as part of its Energy Sector Management Assistance Programme (ESMAP), which supports country-level resource mapping. ESMAP covers another 11 countries, including Ethiopia, Indonesia, Lesotho, Madagascar, Malawi, Tanzania and Vietnam.

That said, however good the pre-construction estimates are, they can still be undermined by large-scale deviations in the wind resource, including the effects of climate change. The prolonged El Nino conditions in 2015, for example, caused a major resource shortfall in the US, with a very visible impact on the balance sheets of plant owners and yieldcos.

However, as Vaisala points out, these El Nino conditions were a global phenomenon, affecting wind speeds around the world, both positively and negatively. By way of example, Storck points to resource maps for south-east Asia in 2015 and 2016, showing winds significantly below the long-term average in 2015 (below).

While the effects might not be seen immediately in emerging markets with few operating wind farms, they may have an impact on programmes and projects in the early stages of development.

For example, it might seriously undermine the accuracy of measurement campaigns carried out during 2015, resulting in significant long-term overor under-performance down the line.

Help may be on hand, however, from new forms of data analysis. As in the developed markets, the industry is starting to use "synthetic global data sets" to help understand longer-term patterns of variability.

The technique uses data collected from satellites, balloons, aircraft and the like, combined with sophisticated computer analysis to simulate the weather and climate anywhere on earth. For the moment, on-site measurement is still imperative, not least for the bankable due diligence process, but it may not be required in years to come.

"You may end up not needing measurements at a wind farm in the not-so-distant future because the data sets and our modelling abilities will be so good," says Storck.

The impact of these El Nino conditions on emerging markets remains to be seen. However, there are encouraging signs.

This includes the use of remote-sensing, advanced modelling and employing synthetic references to put the observed data into a long-term context, he explains.

While Wind Prospect's Crutchley argues that remote-sensing is "a more difficult thing to push" in these markets, he agrees there are promising signs. "In new African markets, a lot of clients are very keen to gold-plate their measurement equipment," he says.

Experience gained in the developed markets also helps, of course, and this will likely grow as emerging markets mature and bigger international investors play a greater role. Not for the first time, the industry will learn from past mistakes.

Work is currently under way on the second phase of the Wind Atlas for South Africa (WASA) to cover the eastern and central parts of the country.

This follows the successful implementation of WASA phase 1, which uses data collected over three years to October 2013 from ten 60-metre masts in the Northern, Eastern and Western Cape provinces, the country's most promising wind regions.

Phase 2 covers the remaining areas of the Eastern Cape, KwaZulu-Natal and parts of the Free State Provinces, with completion expected in 2018.

Each project is divided into a number of work modules, including an observations campaign, high-resolution as well as microscale modelling, together with extreme wind-climate assessment techniques and data dissemination.

The aim is to generate a very high-resolution wind atlas for South Africa to provide developers, financers and other stakeholders with the knowledge to make informed decisions about the viability of their projects.

The data, which is freely available online, is designed to help developers and financiers select potential sites for further, more detailed studies. The project includes building capacity from the outset, working with the whole chain, from government ministers down to people in university departments.

WASA is funded by the United Nation's Global Environment Facility and the Danish Embassy in South Africa, together with the South African energy ministry. 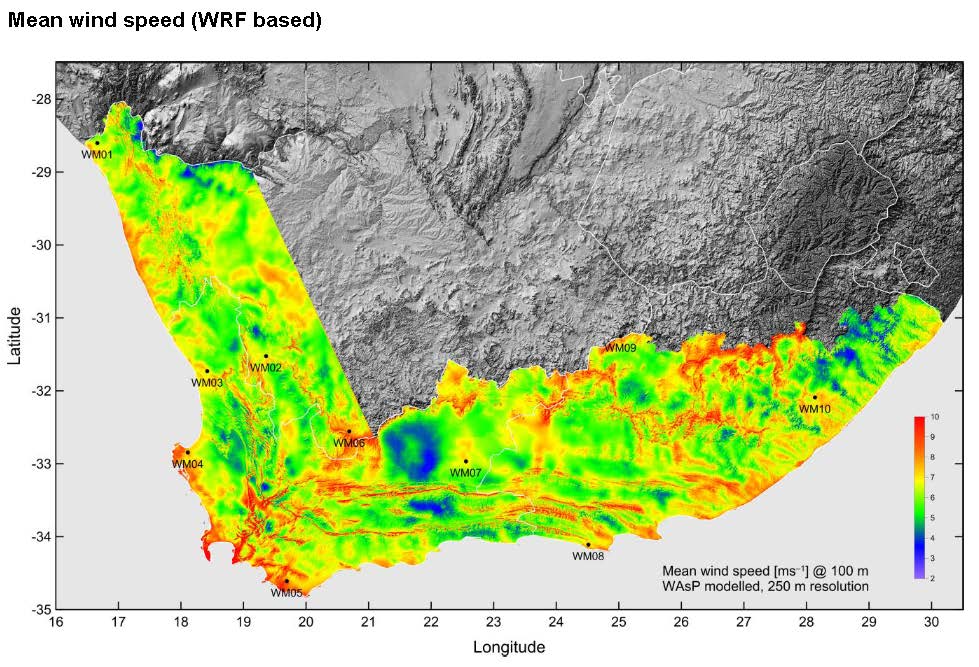