The technique of additive manufacturing (AM), also known as 3D printing, has evolved in a matter of years from producing plastic novelties to making medical implants, concrete houses and parts for jet engines.

A whole new world of design, materials and manufacturing is opening up, leading to talk of another industrial revolution. Not surprisingly, the wind power industry is exploring the technology.

AM involves making a three-dimensional object by adding ultra-thin layers of material one by one, following a design expressed in digital format.

This is the opposite of most conventional manufacturing, where excess material is cut away, resulting in significant waste.

Also, because AM consists of "growing" the part in a single piece from the bottom up, it avoids the need to manufacture several components and assemble them into a larger structure.

This, in turn, removes the need for welding and machining and eliminates potential weak points at interfaces, while also reducing weight.

At the same time, engineers can design components with complex internal structures that would be very expensive, if not impossible, to make otherwise.

Another significant benefit is that AM jumps straight from the design phase to production.

"You can leave out various steps, such as designing and making the tools to make the part," explains Stijn Lambrechts, who leads business development and innovation at Belgium's OWI-Lab, at the Sirris technology centre, applying 3D printing in different industries.

This makes it far quicker and easier to build prototypes and speed up innovation.

Vestas, which has its own 3D-printing facilities, has been working with AM "for a number of years in product development, mainly for rapid prototyping of product and component concepts", says Rasmus Dejgaard Jensen, programme lead for Vestas technology and service solutions.

This allows Vestas to "judge value-chain impacts in manufacturing, transport, installation and service while reducing our time to market", he adds.

Blade manufacturer LM Wind Power, which is currently being bought by GE, says it also uses AM for fast prototyping, without going into further details.

But last year, the US Department of Energy's Office of Energy Efficiency and Renewable Energy Advanced Manufacturing Office (AMO) and Wind Energy Technologies Office (WETO), in collaboration with Oak Ridge and Sandia national laboratories and TPI Composites, used AM for the first time to produce a mould for scaled-down turbine blades.

This cut the manufacturing time of the mould by 35%, and allowed the designers to re-imagine the blade production process, AMO says (see Making a blade mould).

Indeed, Philip Totaro, founder of consultancy Totaro & Associates, believes that blades are likely to be the first components to take advantage of 3D printing in wind energy.

While it is still very early days, with the size and speed of 3D printers being major constraints, the technology "potentially unlocks a lot of design possibilities", Totaro argues.

For example, blades that are optimised for both cost and performance are likely to use a combination of materials in different areas of the blade.

While combining different materials would be extremely difficult using current production methods, AM could make this feasible.

As an interim phase, AM could be used to make parts of a hybrid blade, says Jose Zayas, director of WETO. Most likely would be the tips, using different geometric shapes to address performance and noise, which would then be incorporated into the blades, he suggests.

Zayas's team is going further, identifying every single part of a turbine that could be suitable for AM, according to its complexity, time to manufacture and cost, among other factors.

Because AM is still relatively expensive, at present it is best used for highly complex components, such as those comprising several pieces, which can be 3D printed as a single item, or where extra functionality, and therefore value, can be added.

"If you have a product that can easily be made by traditional manufacture, then AM is not right," Zayas says. "You need to find enough value to put in the components to balance the higher cost," Lambrechts agrees.

One way to do this is through innovative design. Three aspects of AM are especially interesting for the wind industry, says Lambrechts: the ability to include internal channels; make lightweight structures; and integrate functions.

Sirris is part of a consortium, led by the University of Brussels, working on a project monitoring the structural health of gears. This involves 3D printing internal channels in the gear, something that can only be done cost-effectively using AM.

Off-the-shelf pressure sensors can then be used to monitor pressure in the capillaries and give early warn of fatigue cracks.

Simplifying complex geometries is also one of the key research areas for GE, which as a group has invested around $1.5 billion in manufacturing and additive technologies via its Global Research Centre.

Last autumn, GE bought two companies working in metal AM — Concept Laser of Germany and Arcam of Sweden — and also set up a Centre for Additive Manufacturing Advancement in Pittsburgh.

Whereas the nozzle used to consist of 18 separate components, the redesigned part is now printed in a single piece, and is 25% lighter, five times more durable, and more fuel efficient than the nozzle made by traditional means, GE says.

Beyond that, the group is looking at every component of the wind turbine, "thinking of where we can invest", says Shridhar Nath, technology leader for composites at GE Global Research.

Another key area both GE and Vestas are focusing on is developing new materials within AM. "This is critical for the technology to become truly relevant in our products," Jensen says.

For its part, GE Global Research is drawing up a "recipe book" of materials and how to combine them in ways previously not possible in order to unlock new capabilities. It is conceivable, for example, to develop lighter, stronger materials for blades and other components.

There is also a lot of research into power electronics and 3D printing silicon carbide, with the potential to greatly reduce weight at the top of the turbine, says AMO director Mark Johnson.

Although Siemens is not yet using AM in the wind sector, like GE it is already applying the technology to rapid prototyping and is printing spare parts for its industrial gas turbines.

The company is also building a factory devoted to metal 3D printing in Sweden. Siemens' analysis revealed that AM can lead to a 75% reduction in development time and 60% faster repairs.

All this will have a radical impact on the supply chain, of course. Not only will AM mean fewer sub-components, but it will also be possible to design the part in one place and then 3D print it in different locations, close to where it is needed and on demand.

With this in mind, GE is already building up a network of locations around the world offering additive production. "It is a gamechanger," Nath says. "You can imagine having a printer very close to large wind farms."

Vestas is thinking along the same lines. The Danish manufacturer sees "a clear potential in the medium term" within spare parts and repair, Jensen says.

"With more than 68GW under service and turbines installed in 75 countries, often in remote areas, a technology to produce and distribute spare parts locally could potentially help reduce cost and downtime on our customers' turbines," he says.

In the more distant future, Johnson believes it might even be possible to set up a 3D printer at the construction site and produce large components, such as blades, which are increasingly difficult to transport, in situ.

Another interesting market is the potential to manufacture spare parts for turbines that are still operating but no longer in production. If, for example, old blades need replacing, "you could scan a blade, reverse-engineer and 3D print a mould, make the blades and extend the life of the turbine," Lambrechts says. 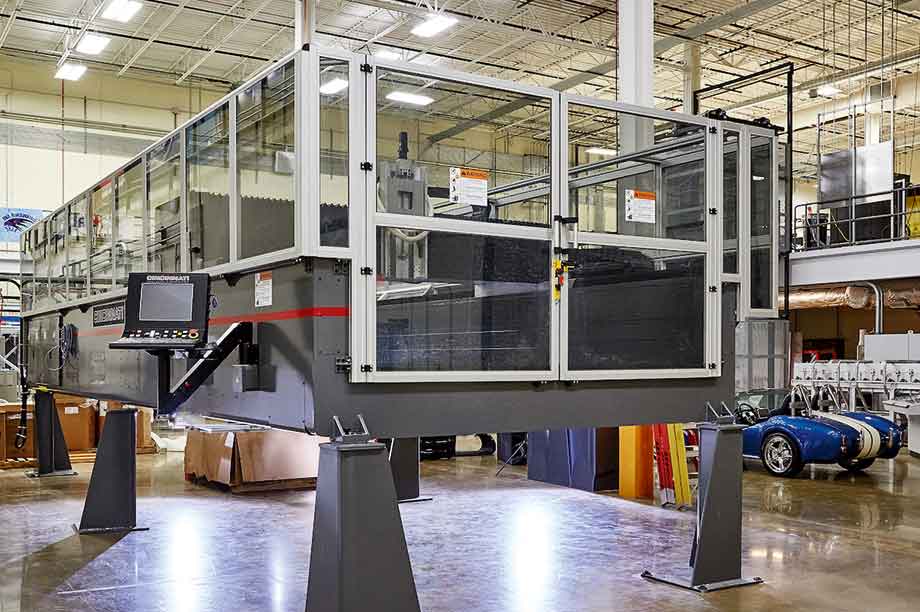 In the meantime, however, the are three major hurdles to overcome: size, speed (combined with precision) and cost. But things are moving fast.

While the latest version of the big-area additive-manufacturing (BAAM) machine (pictured) at Oak Ridge National Laboratory (ORNL), one of the largest and fastest 3D printers in the world, can print objects up to 6 metres long and 2.5 metres wide, and deposits material at over 45kg/hour, ORNL is working with Ingersoll Machine Tools on a bigger, faster printer.

The planned wide and high additive manufacturing (WHAM) machine, expected within the next two years, should be able to print parts up to up 14 metres long and 7 metres wide, with a deposit rate of over 450kg/hour.

While these machines are still not big enough to make entire turbine blades, there are plenty of smaller components to focus on, such as the gearbox, drivetrain and pitch system. As to when we might see AM used in the wind sector, it is likely that things such as moulds and other production tools will lead the way, alongside prototypes.

That is "a good starting point to build up experience in 3D", Lambrechts says, allowing companies to gain knowledge at the development stage, where the risks are lower. "Once they build up enough confidence, then they can start printing actual components and send them to market," he adds.

The technology is developing so fast it is difficult to predict, but the consensus seems to be that the wind industry will start 3D printing components at a small scale within two years, and in around five years at a larger scale and on a more widespread basis.

"It is not a big stretch of the imagination to anticipate that GE will likely be the first to introduce something in wind energy," Totaro says. Lambrechts sees small hydraulic components with internal channels, such as in the pitch system and gearbox, as among the early leaders.

Given the potential benefits, there is no doubt that the wind industry will begin to use AM in the near future. It will fundamentally change the way parts are designed and open up all manner of exciting possibilities, especially as new materials come on to the market. The industry will be able to do things it could not have imagined five or ten years ago, Nath believes. "The only limit is human ingenuity," says Zayas. 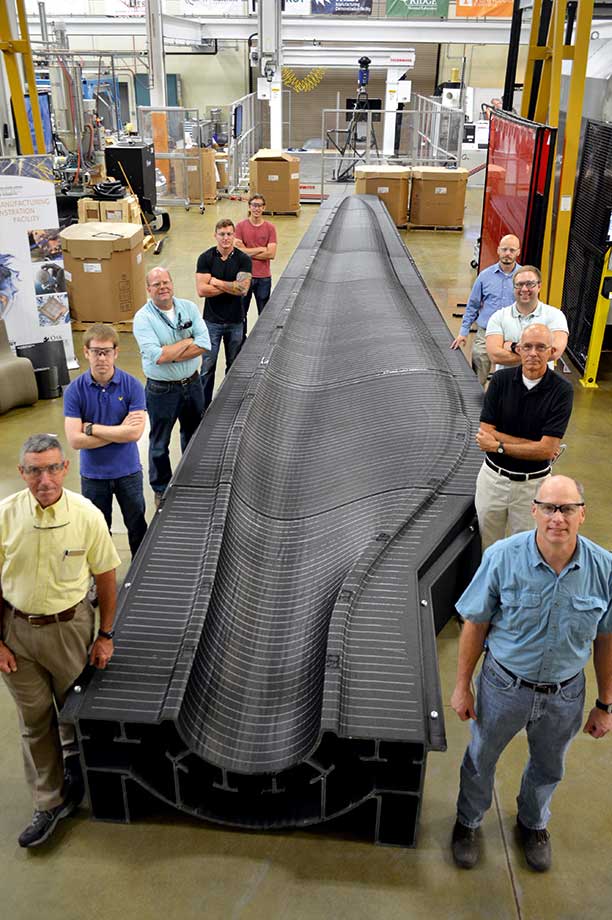 Traditionally, creating a mould requires first making a "plug", a full-size representation of the final blade, which then acts as a core around which to shape the mould. Additive manufacturing (AM) removes this labour-intensive and costly stage by 3D-printing the mould directly, without the need for a plug.

AM also allows the designers to incorporate innovative features, notably air ducts that avoid having to embed heating wires - needed when making the blade - in the mould by hand.

Even so, it had to be made in segments around two metres long, before being assembled into a single mould (pictured). This will now be used to produce four 13-metre blades for research into wake effects to be carried out at Sandia National Laboratory.

"One of the key elements is that AM can greatly reduce the time it takes to make blades," Johnson notes. This will allow faster development of innovative blade designs and could also lead to designing different blades for different parts of the wind farm in order to optimise productivity.