Greases and oils perform the same basic function — lubrication.  So how are they different? Simply put, grease is an oil with a thickener added to it. Lubricant selection has conventionally been driven by base oil viscosity, in the belief that a higher viscosity enhances film thickness and performance.

This logic is understandable, since the lubricant film-forming behaviour of grease approaches that of its corresponding base oil at high speeds. But what about the film formation at low speeds — a question that is highly relevant to lubrication of wind-turbine bearings?

This article will highlight a study that suggests another basis for choice of wind-turbine lubricant by giving a different perspective of the lubricant film-formation behaviour of greases and how it differs from that of oils, especially at low speeds.

Much is known about the film-forming behaviour of oils — knowledge dating back to film-thickness experiments conducted in the 1960s. As is widely acknowledged, oil film thickness increases with speed, following the classic EHL (elastohydrodynamic lubrication) theory with a log-log film thickness-speed exponent of 0.67.

However, film formation with greases can differ significantly from that of oils in low-speed applications, and the behaviour is influenced by many factors, including:

A common belief concerning grease lubrication is that the film thickness of the grease approaches that of its corresponding base oil at high speeds due to similar rheological properties. However, at low speeds, the grease film thickness can be significantly higher by a factor of "d" as shown in Figure 1. This indicates that conventional EHL oil theory could be applicable to grease lubrication at high speeds, but may not be so for low speeds. 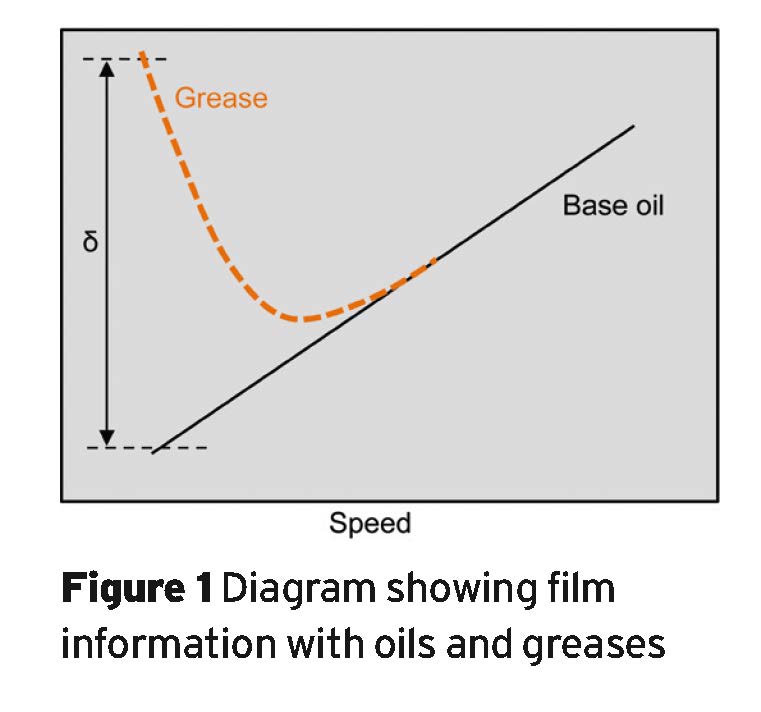 Since there exists no reliable model that takes this "d" into account, bearing calculations rely on base-oil properties; lubricant selection based on this is likely to be conservative, with an additional margin needed to ensure a reliable operation. This contingency might not be necessary when, for example, such a "d" is ensured.

The thick film formed by greases at low speeds sounds promising and suggests that greases should offer excellent performance in general. But would all greases form such a thick film at low speeds?

This depends on the properties listed above, implying that not all greases would yield such a thick film formation. From a large study conducted at Klüber Lubrication, some examples are shown here to support the above described hypothesis. 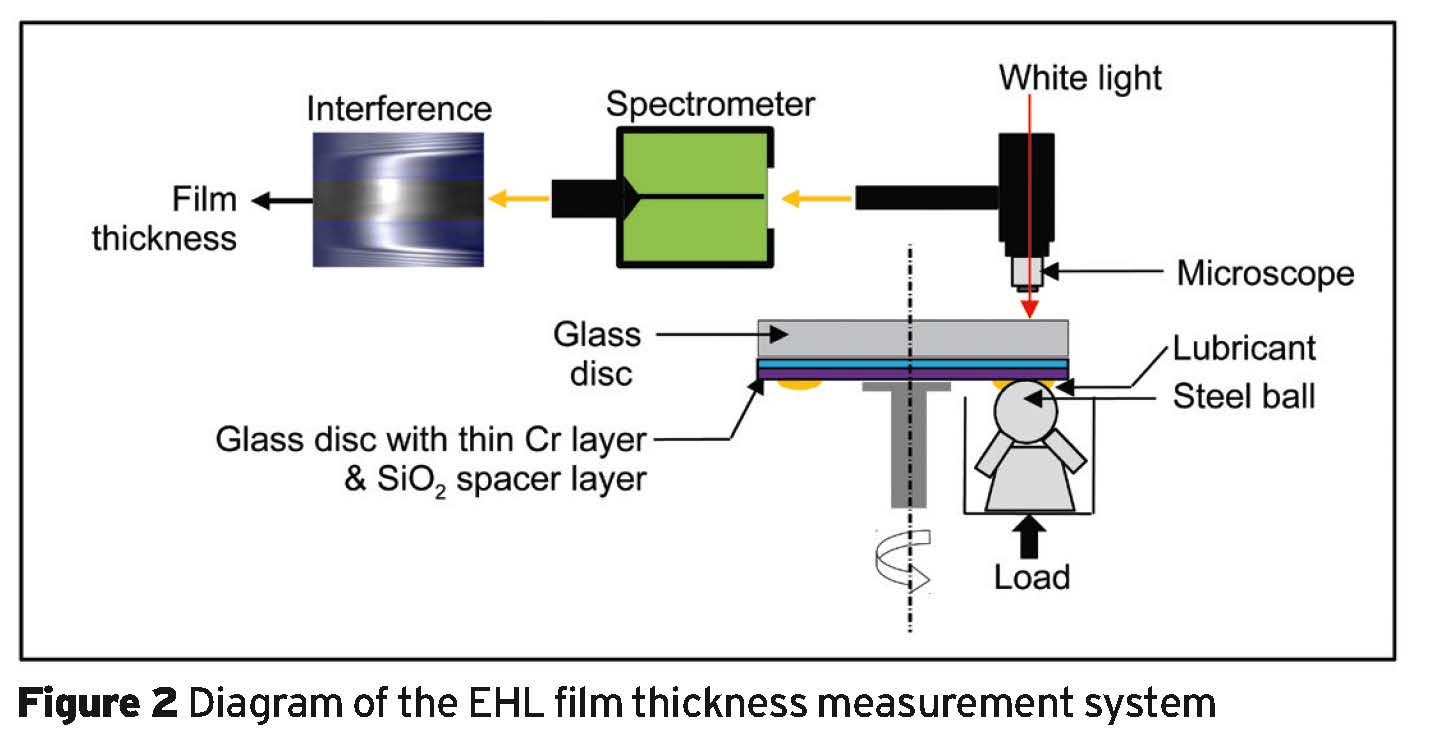 The rig workson the principle of optical interferometer, whereby a white-light source illuminates a steel ball loaded against a rotating lubricated glass disc. The image of the contact area is captured and is used to determine the film thickness.

The film thickness of Klüber greases and other greases n the market was measured by varying the speed in stages from 0.001 to 3.5m/s under a pure rolling condition; the results are shown in Figure 3 and demonstrate that a low base-oil viscosity grease (such as Klüberplex BEM 41-141, which has a viscosity of 130mm2/s) forms a much thicker lubricating film than standard high-viscosity greases (>400mm2/s) at low speeds.

Importantly, it is evident that not all low-viscosity greases provide such thick film formation at low speeds; for instance, a grease with viscosity >200mm2/s forms a much thinner film and behaves similarly to the 130mm2/s oil.

Wind-turbine bearings, especially the main bearing, are relatively low speed, meaning the above theory has significant relevance to the industry.

The thicker film here means a low-viscosity grease with an effective thickener would operate with a higher lambda ratio (ratio of film thickness to surface roughness), or the kappa value (ratio of lubricant viscosity to required viscosity at operating temperature) would be much higher (using the effective viscosity of grease based on the measured film thickness).

The advantage is especially seen in low-speed applications, such as the main bearing of wind turbines. This runs contrary to the common belief that the desirable properties of a grease increase with base-oil viscosity.

The Klüber Lubrication study demonstrates that a low base-oil viscosity grease, such as Klüberplex BEM 41-141, forms a much thicker lubricating film than standard high base oil viscosity greases, and so can enhance the kappa value and the operating life of the wind turbine bearing. 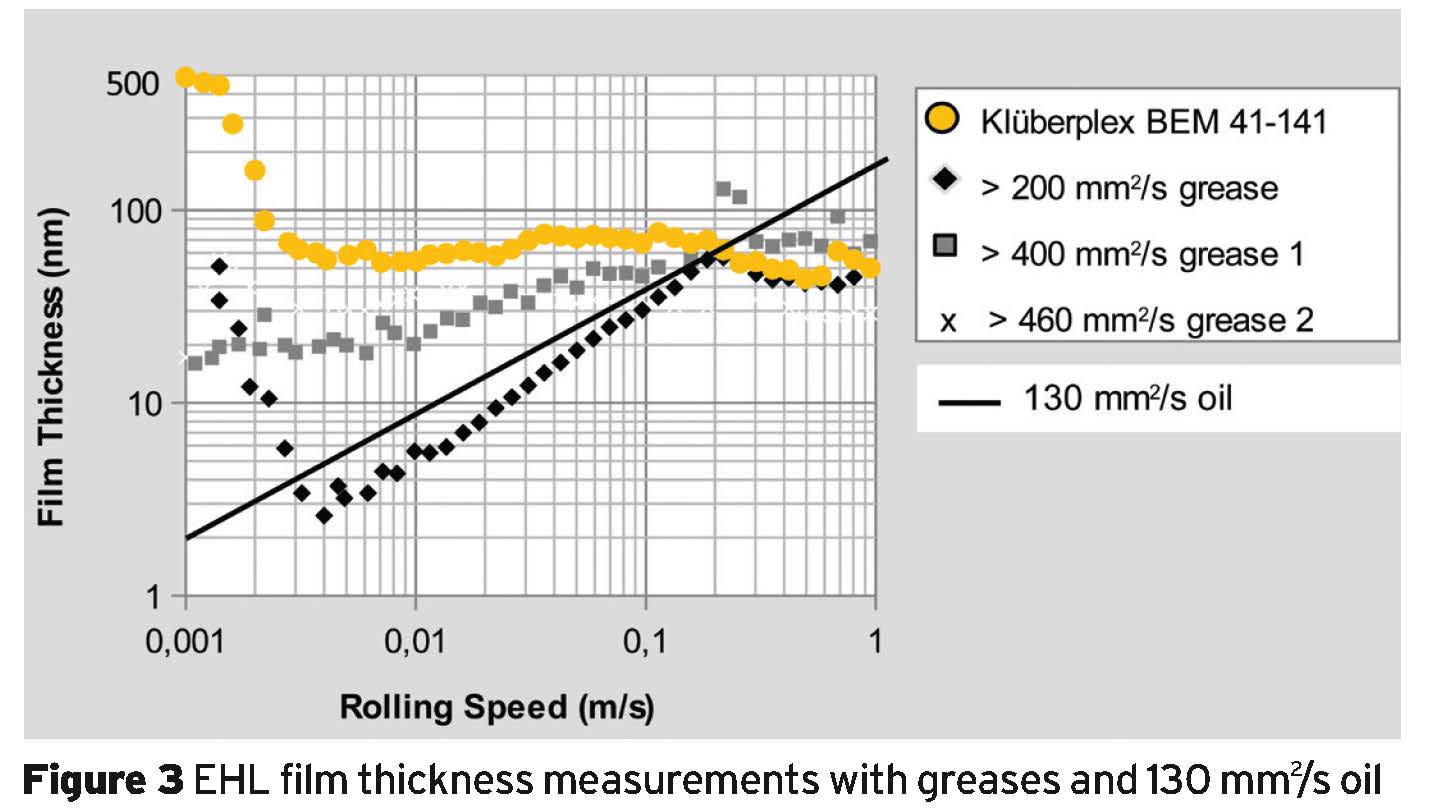 Balasubramaniam Vengudusamy is a senior research tribologist, and Akshay Rajeev is a sales development manager in the wind-energy business unit at Klüber Lubrication, Munich