Superstorm Sandy was on the wane when it hit America's north-east coast in October 2012. But it still packed enough punch to close three nuclear reactors and force others to reduce their power output. At least one stayed offline for several weeks.

Meanwhile, most of the 3.5GW of wind turbines in the path of the storm's sustained winds of 36m/s (130km/h) and gusts up to 43m/s along the coast, survived unscathed. Depending on local conditions they either continued operating, or were brought back online shortly after.

In a similar vein, seven near-shore turbines withstood the tsunami that devastated eastern Japan in 2011, destroying the Fukushima nuclear power plant located not far up the coast.

Then, in 2015, when an 8.3 magnitude earthquake struck northern Chile, the region's 600MW of wind capacity escaped unharmed despite widespread damage to the grid. In all three cases wind power helped fill the gap left by other forms of energy generation disappearing from the grid.

There is no room for complacency, however. As wind power moves out of its established markets and into more challenging areas, such as the typhoon-prone South China Sea, it will face greater exposure to natural catastrophes. Long-term climate forecasts overwhelmingly predict that weather will become more extreme, more often.

There are many examples where turbines have been toppled or damaged, and wind energy is just as vulnerable to grid or substation failure as any other from of electricity generation, but it does possess some inherent resilience.

The most obvious is its distributed nature. If individual turbines, or even a whole wind farm, are damaged, the impact on the overall system will be far less than if a nuclear or large fossil-fuel plant goes offline.

Given that there are "multiple things that can cause a nuclear or coal plant to go down, the shutdown of an entire plant is probably a greater risk for conventional power," says Sandy Butterfield, chair of IECRE, the recently launched system of certification to IEC standards for renewable energy.

Distributed generation "is clearly an advantage" agrees Christer Eriksson, service line leader for type certification at DNV GL. "And you do not get consequential damage, such as any environmental impact," he adds.

This is reflected in insurance claims, with natural catastrophes resulting in far greater losses for thermal or nuclear power stations than wind farms.

"The largest single wind loss has not exceeded $90 million, but the power market each year sees losses of $100-500 million from natural catastrophes and fire," he says.

This is partly because there is simply less installed wind capacity in the world, and most is in the northern hemisphere, where the risk of natural catastrophes is lower.

Now, however, the industry is expanding into regions with less benign conditions, and there is also evidence that the number and intensity of typhoons (known as cyclones in the South Pacific and Indian Ocean, and as hurricanes in the Atlantic and north-east Pacific) is growing. This is driving new technology and design standards (see Tropical Conditions, below).

In addition to design requirements, international standards make it clear that detailed site assessments are essential to determine local conditions.

This is especially the case for typhoon and earthquake zones. However, because these are rare and unpredictable events, gathering data and carrying out risk assessments is not easy. For a start, the measurement devices also have to be able to withstand the onslaught.

By way of example, weather measuring firm Vaisala is carrying out resource assessments in the south-east US. In October, one of its Triton remote-sensing units sat directly in the eye of hurricane Matthew, which notched up sustained winds of 33m/s and gusts up to 44m/s.

The wealth of data recorded will feed into the weather assessment analysis and determine the best turbine to suit the conditions. "We are reducing the weather risk, so that the developer can go in well prepared," says Lee Alnes, key account manager at Vaisala.

Typically, a turbine is designed to shut down at wind speeds of around 25m/s and rotate to face the wind, with the blades pitched at 90 degrees to the wind.

The ability to predict gust strengths and shifts in wind direction is vital, while shorter, stronger towers and shorter blades also increase resilience. Other design features can help.

"Direct-drive turbines should be better able to withstand harsh conditions because they have fewer moving parts," says Murray Haynes, a partner at Alesco Risk Management Services. "There are a growing number of cases where turbines have survived typhoons," says Butterfield.

According to IEC standards, class-I turbines should be able to withstand extreme winds up to 50m/s and gusts up to 70m/s, equating to a category 3 hurricane (see table, below). And manufacturers are increasingly turning their attention to designing turbines able to withstand even more extreme conditions.

One of these is Gamesa, which recently sold 38 G114-2.5MW units to projects in China's typhoon-prone Fujian province.

The turbines are designed for class-II wind sites, but include various features to enable them to withstand the region's extreme winds. These include an "uninterruptible yawing system", explains Juan Diego Diaz, Gamesa's marketing director.

When the grid is down, as often happens in typhoons, a diesel generator kicks in to ensure the rotor is kept facing upwind. Diaz sees a big potential for such turbines. "Gamesa forecasts are very positive and we expect very relevant incomes coming from these typhoon areas," he says.

A growing number of designers believe that two-bladed downwind turbines have distinct advantages when it comes to offshore deployment in typhoon-prone areas. These include lower risk of blades hitting the tower, and therefore simpler blade and tower designs, leading to costs savings.

Ming Yang is developing a 6MW turbine, licensed from Aerodyn, targeting the typhoon-prone coast of south-east China. Aerodyn is also working on a floating turbine, the 8MW Nezzy, while Dutch company B-2 Energy should see two of its radical 6.2MW two-bladed downwind machines installed in 2018.

Its GEV MP-C turbines, which can be lowered to the ground during storms, have survived numerous storms across the globe, including cyclone Pam, which hit the Pacific island of Vanuatu last year, packing gusts over 89m/s.

However, resilience comes at a cost for all these specially engineered turbines. To reach a wider market, last year Vergnet signed with Sinovel to adapt the latter's three-bladed 1.5MW turbine for cyclone zones.

This includes a more robust design and, like Gamesa, a back-up power system to keep the rotor upwind if the grid fails, explains Marc Rivard, Vergnet's sales director.

Behind Vergnet's strategy lies the fundamental issue of weighing up risk and cost. How likely is it that a typhoon will hit the exact site chosen for deployment and, if so, what wind speeds will it bring?

"You should at least design for the 50-year events, which have a 2% annual probability of occurring, though this will then not cover the most extreme," Eriksson notes.

As a result, some customers "prefer to rebuild in case of the very unlikely event of a category 4 or 5 cyclone, rather than paying more for a turbine that is technically fit for the conditions," Rivard remarks.

"You could design a turbine to withstand the loads, but it would be very expensive," Diaz adds. And it might perhaps never be needed. In the end, customers want something "relatively safe but cost-effective", Diaz says.

Then, of course, if a typhoon does hit, "it is the insurers who pick up the brunt", GCube's Sharma points out.

That said, the industry has learned a lot in the last 20 to 30 years, often through bitter experience. In addition, far more data is available now and is far more sophisticated in its detail. "The more typhoons we get, the wiser we get," is how Eriksson sums it up. 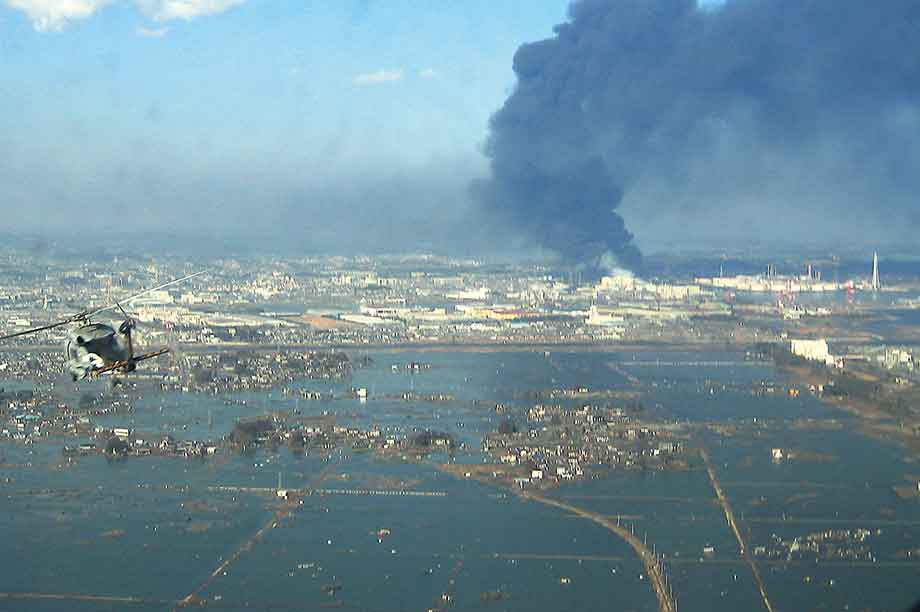 The shockwaves of the earthquake and tsunami that overwhelmed the Fukushima nuclear plant in March 2011 were felt right around the energy world.

In the immediate aftermath Japan closed down all its reactors, Germany pledged to phase out nuclear from its energy mix by 2022, Italy held a referendum in which 94% voted against plans to build new capacity, and France announced its intention to reduce nuclear usage by one third.

At the time it looked like a blow from which the nuclear-power industry would not be able to recover, and a golden opportunity for the development of renewables to fill the gap. But now, nearly six years later, rumours of nuclear's demise seem to have been exaggerated.

While only four of Japan's nuclear reactors have been restarted since the disaster - and two of those have been offline since March due to an injunction imposed by a district court - the Japanese government expects around 20 to be up and running by March 2018.

Driving this return to the nuclear option have been the findings of an investigation into the events at Fukushima, which laid the blame at the regulators and managers who had skimped on safety standards and ignored warnings.

Fukushima "cannot be regarded as a natural disaster", wrote Kiyoshi Kurokawa, chairman of the Nuclear Accident Independent Investigation Commission, in the panel's report. "It was a profoundly man-made disaster - that could and should have been foreseen and prevented."

International design standards for wind turbines are set out in IEC 61400-1, which details the minimum requirements to ensure turbines are appropriately designed for specific conditions.

In addition to the standard classes, a manufacturer can modify the design criteria to cover other specified conditions under the Special (S) classification. The standards are largely based on European experience and do not adequately reflect the extreme effects of typhoons - very high sustained wind speeds, rapid shifts in wind direction, and intense turbulence. Many typhoon-prone areas will have wind regimes typical of class II or III, but a typhoon's instantaneous wind speeds may far exceed class I.

In response, the IEC is adding a new Tropical storm (T) designation to its standards, a revised edition of which should be published in the next few months.

The new designation, which can be combined with any wind class, specifies a reference wind speed of 57m/s and a 50-year event gust of 79.8m/s (see table, below). (The latter figure equates to nearly 290km/h or 155 knots.)

"It is designed to cover 90-95% of all coastal locations in the world where wind turbines might be deployed," says Paul Veerse, secretary of the IEC team developing the standard.

While the S classification can be used to cover typhoon conditions, having a separate designation is important. It will help define the terms, while "writing it into the standards makes it more visible and creates a procedure", says Veers.

It will set parameters for the product lines from manufacturers, and greater information for the financiers and insurers to compare technologies and decide if it is fit for a particular site.

The new designation is probably just the first stage in further refinement of the standard.

"We are using a fairly simplified approach to create an envelope," says Veers. "A lot of work needs to be done by the industry to fine-tune design load cases that are not overly conservative."