Just how many trade fairs and conferences can the global onshore and offshore wind sectors afford each year? Does a bigger show mean a better one?

Now that the heady euphoric early days of wind-energy development are gone, economic support for the sector is shrinking, stepping up competition and forcing the industry to examine costs at every turn.

So where does the global wind industry want to meet, catch up with innovations and do business? Can one trade fair be all things to all men — what the Germans might call an "eierlegende Wollmilchsau", or roughly translated, an egg-laying, milk-providing, wool-giving sow? WindEnergy Hamburg is giving it a go.

After attempts in 2002, 2004 and 2006 to wrest the main German and international wind-energy event from the traditional location in Husum, the Hamburg WindEnergy company had to retrench.

The upshot was a three-year cooperation between the Hamburg and Husum wind-fair firms to create Husum Windenergy, which then held three shows in Husum to 2012.

In parallel, the Husum Wind company had clinched a deal with the major Hannover trade fair company in 2003, helping the Husum team to internationalise its business. In alternate years, when the Husum event did not take place, the Hannover industry trade fair established a showcase for the wind-energy sector.

But as the Husum/Hamburg cooperation drew to a close, Hamburg returned to the offensive with wind industry-backed plans for a wind fair in 2014.

With the threat of a clash over two north German wind events in one year, a compromise was found. The two trade fair companies agreed to jointly organise, in alternate years, an international wind event in Hamburg, and a more local event in Husum.

So in 2014, Hamburg again opened its doors to the wind industry, but now in cooperation with the Husum organisers. That year it clocked up more than 1,200 exhibitors and around 33,000 visitors.

This year, the event in Hamburg, from 27 to 30 September, is described as an international expo for both onshore and offshore wind, reflecting the global market and the whole of the value chain.

Indeed, the Windforce offshore fair, Germany's only major offshore wind exhibition, held for the first time in 2014 with 253 exhibitors and originally scheduled for Bremen in June 2016, was cancelled in February after numbers had dropped by a third, and subsumed into WindEnergy Hamburg.

The list of exhibitors for the Hamburg event now indicates at least around 1,400 exhibitors from over 30 countries, which will present their latest products and services in nine exhibition halls.

Chinese turbine manufacturer Envision is to take the biggest individual stand. There will be at least 18 national pavilions, and Denmark's — with 90 exhibitors — is due to fill a whole exhibition hall, according to the event organisers. 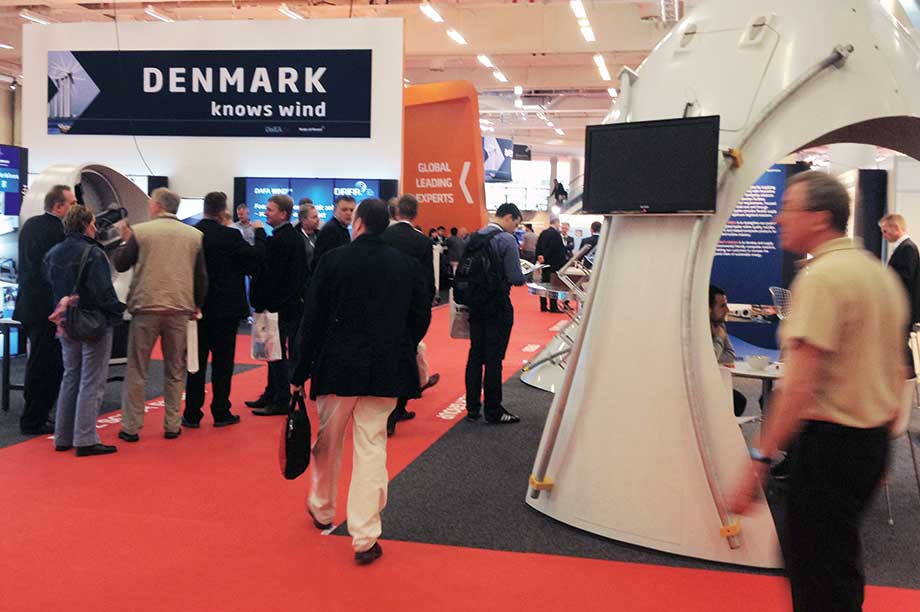 Strong presence… As in 2014, Denmark will be well represented among the country pavillions at Hamburg

Visitors will also be able to learn about topics such as smart-energy solutions; two-way smart-grid design; and options for energy storage, including power-to-gas, battery systems, virtual-power-plant concepts, grid-stability enhancement, smart electric mobility and offgrid systems, according to WindEnergy Hamburg.

Adding another jewel to the crown, for the first time, the WindEurope Summit will be held in parallel to the WindEnergy Hamburg trade fair this year. The major conference event is organised by WindEurope (formerly the European Wind Energy Association).

It has been a protracted process, but Germany's long tradition of hosting wind events seems to have finally consolidated into a global jamboree in Hamburg.

Yet Husum lives on with its wind trade fair in the years between the biannual Hamburg event, focused on the wind industry in Germany and its neighbouring countries. In 2015, the Husum event clocked up 651 exhibitors and 17,000 visitors.

The tradition of wind fairs in northern Germany began in Husum — a small port on the North Sea coast previously known mainly for a ghost story titled The Rider of the White Horse, telling the tragic fate of a dyke master and his family, published in 1888 by local novelist Theodor Storm.

The first Husum wind trade fair took place in 1989 in a former aircraft hangar, then regularly used for cattle auctions. There were only around 20 exhibitors, but 10,000 people visited during the three-day event, according to the Husumer Windenergietage chronicle.

This was a time of a huge surge in opposition to nuclear power. Following the nuclear-reactor catastrophe in Chernobyl in April 1986, plans for a nuclear-fuel reprocessing plant at Wackersdorf in Bavaria were overturned, and wind energy was first identified as a potential alternative source of energy.

These were truly remarkable numbers for a small seaside tourist town with a rail link but only a small airport, albeit well placed for northern Germany's burgeoning onshore wind sector.

However, huge improvements had been made over the years, including to the mobile phone network, car parking and shuttle connections to Hamburg airport, as well as a multitude of hotels in northern Germany in a broad radius around Husum.

Instead of the usual city journey to a venue, many Husum visitors came in from the countryside. Most of the exhibition halls were (and are) large marquees with wooden floors and canvas roofs, flapping in the wind. Not everyone's idea of an ideal trade-fair environment. 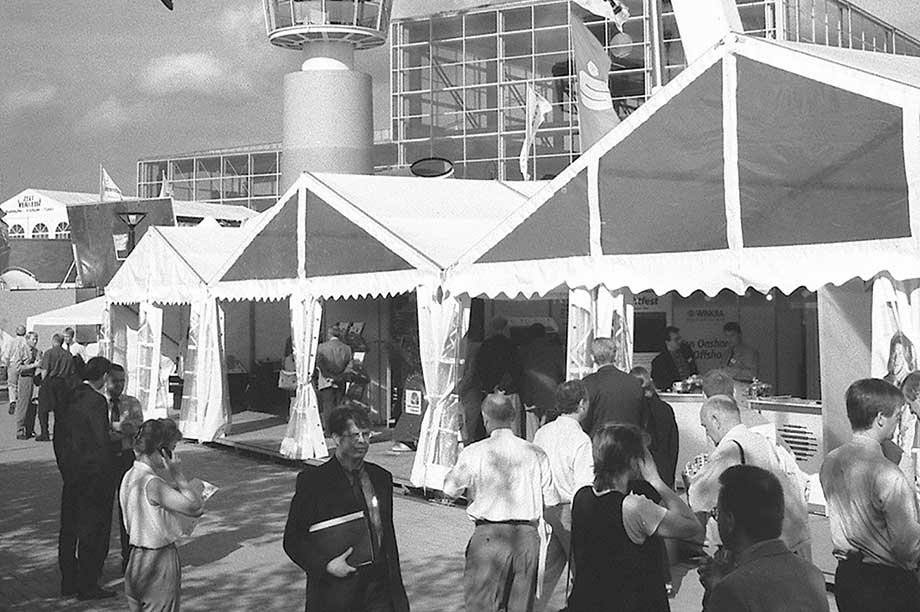 Yet, as WindEnergy Hamburg 2016 gets ready to open its doors, advertising for Husum Wind 2017, scheduled for 12-16 September is in full swing, including a notice on its specialised offshore-wind showcase. Next year will show whether the legend is still alive.