Principle Power’s 24MW Windfloat Pacific, co-developed by Deepwater Wind was to be sited with floating foundations off Oregon, northwest US.

Dominion Virginia Power’s 12MW Virginia Offshore Wind Technology Advancement Project (VOWTAP) was to use GE Haliade turbines at a site off Virginia. The project had been working on a twisted jacket foundation with hurricane resilience.

In September 2015, Dominion released a second tender round for the VOWTAP project, as the first round was found to be too expensive.

Dominion received a single qualified construction bid in the first round. The estimated cost of the project of $400 million was nearly twice the amount Dominion had expected.

As runner-up projects for the DOE programme in 2014, they had already been allocated some research and development assistance.

The third project originally accepted on the DOE programme, Fishermen’s Energy’s s 24MW Fishermen's Atlantic City Windfarm (FACW) has been granted an extension for obtaining a power purchase agreement (PPA) from May to December. FACW is to use Siemens 4MW turbines.

"To date, three projects… have demonstrated significant progress toward being successfully completed and producing power," said a DOE spokeswoman.

The three original projects had been awarded $47 million in May 2014, to be disbursed in stages.

To qualify, they were to have completed final engineering design, permitting, installations and operations and maintenance plans and a PPA by May 2016, with commissioning by 2018.

Windfloat VOWTAP and Windfloat Pacific were unable to meet the deadline. No money will have to be returned, said a DOE spokeswoman.

In a statement, Dominion said it could not guarantee an in-service date for VOWTAP before 2020. The company is considering its options.

"Naturally, we are disappointed in the DOE's decision because we still believe that offshore wind has a great potential to deliver clean, renewable energy to Virginia," said Dominion Energy Solutions senior vice president, Mary Doswell.

"However, we also recognise the unique regulatory and cost challenges involved in our project and appreciate the DOE's desire to support other projects that may have an earlier opportunity for fruition," Doswell added. 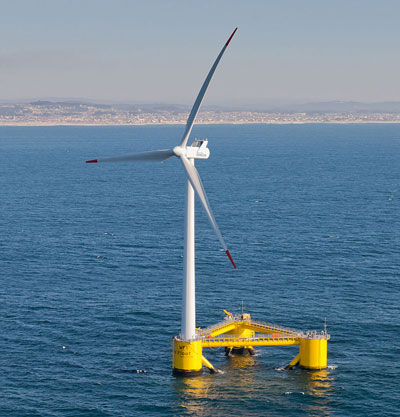 Principle Power's Windfloat platform, above, is preferred choice for two developers pitching for a floating project off Hawaii.