Scaling and optimising wind-turbine drivetrain configurations continues to feature in the ongoing search for reliable, long-lasting drive solutions with the best levelised cost of energy. Most geared and direct-drive concept solutions are based on well-known technology principles and a limited number of real concept variants. But two new companies have entered the wind industry, each with a novel direct-drive concept they believe will make a real difference set against current state-of-the-art drive technology.

German wind pioneer Hans Henning Jacobs was already known to the industry as founder of former wind-turbine supplier Jacobs Energie, one of the three firms that in 2001 merged into Repower (now Senvion). In 2009, with two co-shareholders, he set up Venpower, to further develop and commercialise a novel patented generator technology principle by German inventor Peter Hein. This flux-switching permanent magnet (FSPM) electric machine was given the registered trade name Permavent.

Jacobs also founded Jacobs Power Tec, a wind-turbine development firm, with two partner-shareholders, to develop a competitive lightweight direct-drive generator based on the FSPM principle. They believe this is ideally suited for offshore applications due to its manufacturing technology and protection level against harsh environmental influences.

The test generators will be incorporated in two 3MW prototypes of the JPT 3-120 turbine with a 120-metre rotor diameter, designed for IEC class IIIA and IIA. "We plan to install one prototype in the eastern part of Germany and the second at a coastal site in the north of the country, both within the next year," says Jacobs.

The modular prototype generator has a relatively large diameter and is an inner-rotor electric machine design. But this is the only conformity with similarly dimensioned "conventional" electric machines with stator coils and rotor magnets - electrically excited or permanent - and operating according to the rotating-field principle.

The Venpower generator stator comprises 24 separate, individually dismountable and adjustable stator-modules. Not only does this enable the design of a very small air gap, it simplifies transportation. Each module incorporates an individual power converter.

The stator incorporates a combination of permanent magnets as well as copper windings, while the generator rotor contains only magnetic steel, but no magnets or coils.

The operating principle centres on the movement of the rotor guiding the magnetic flux along alternating paths, causing the net flux through the coils to switch, inducing an alternating voltage across the winding. Each group of 12 stator modules is connected to a single industrial MV-transformer, which alongside the 24-fold generator redundancy, provides further redundancy of the infeed part.

A superior magnet-field strength of 85 kilonewton per square metre (KN/m2) is a key FSPM benefit for Permavent, according to Venpower. This compares with +/-60KN/m2 for "conventional" PMGs (such as Siemens or Vensys direct-drive machines), and around 50KN/m2 for an electrically excited direct-drive-generator (such as Enercon). "This combination of high energy density and high internal tangential field forces, and our choice of a relatively large generator diameter results in about 30% mass reduction and an equally favourable Capex saving potential," says Jacobs.

With substantial systems redundancy, the turbine can continue operating at reduced output if one or more of the stator modules fails, he adds. The integrated stator cooling system enhances the prospect of the machine lasting its 25-year service life. Combined with the easy module inter-changeability, Jacobs is confident it can reduce lifecycle-based Opex by more than 30%.

"System modularity and other design choices will allow large industrial-scale manufacturing with maximised economies-of-scale benefits," he says. "Venpower wants to make the technology and complete systems available to third parties and larger-scale application, including offshore. So all generator segments are fully sealed against demanding environmental conditions, including marine, and the stator magnets are water-cooled."

The company is in early talks with wind turbine suppliers. 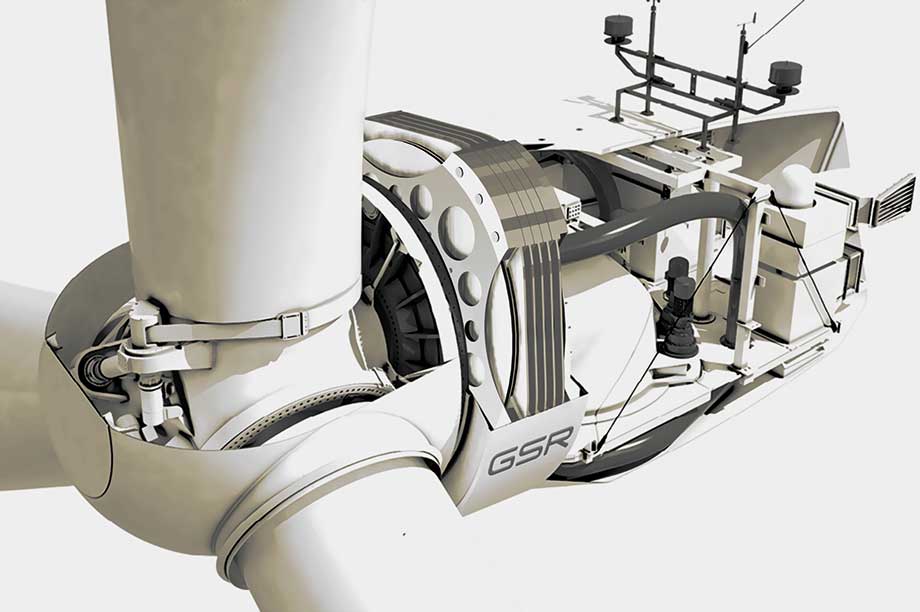 Another novel concept comes from UK-based GreenSpur Renewables, whose low-cost axial-flux generator concept has no rare-earth elements for its magnets. The company's generator design offers a magnetic field strength that provides the same overall generated energy as that of the 60KN/m2 range found in comparable PMGs containing rare-earth elements, according to GreenSpur director and inventor Hugh-Peter Kelly.

"The project focus was to model the use of cheaper ferrite (iron-based) magnets, and to determine from first principles if it would be possible to design a new topology that could deliver a competitive direct-drive PMG," says Kelly. "This worked out much better than anticipated, and the potential benefits are significant."

Ferrite can be obtained from iron ore and is abundantly available with no supply-chain restrictions or market monopolies, explains Kelly.

Measured by mass, ferrite-based magnets are also roughly 27 times cheaper than neodymium iron boron (NdFeB) magnets. As demand for NdFeB for direct-drive turbines is in the range of 600-700kg/MW, this represents a considerable Capex share, especially for 6-7MW offshore turbines.

Additionally, overall demand for NdFeB-based magnets is increasing in established as well as new technology applications, such as electric vehicles.

"Future shortage of the 'heavy' rare earth Dysprosium, which is critical in the manufacture of NdFeB magnets to enable them to operate at high temperatures, is often not fully appreciated," says Kelly. "A Dysprosium shortage or price hike could become a real problem in the ongoing transition to a 'greener' world economy."

GreenSpur's generator design comprises multiple rotor disks positioned on a central rotating support cylinder shaft, which is not sensitive to air-gap size and is still acceptable with 5mm or more, according to Kelly. These disks are individually spaced with a pre-determined air gap between the opposed inner faces of the ferrite magnets, in turn attached to each disk side except the end disks.

"Concentric rings of specially designed stator coils are sandwiched between, and by simply making efficient use of the rotor and stator areas available, Capex can be reduced and output boosted substantially," he adds.

The goal was to establish the strongest field intensity between facing poles, cutting as many productive turns of stator coils as possible, and field intensities increased as expected when using thicker magnets, but only up to a point. In order to establish the optimum configuration, a mathematician was engaged to model a movable software coil, while Cambridge University provided additional scientific validation with finite element analysis and electromagnetic validation.

The research, aimed at optimising magnetic paths, boosting flux density and reducing flux leakage losses, resulted in unusual and highly innovative electric machine characteristics. Kelly is unable to reveal the full details for IP reasons, but says: "The main breakthrough feature is a novel rearrangement of the rotor (ferrite) magnets. By magnetising and placing them in a new configuration the effect was an average field strength increase across the air gap of 22%, and a power output increase of 48%."

Greater output means higher heat dissipation demand, already a well known challenge in large-scale axial-flux generators. GreenSpur tackled this with a forced air cooling solution. "The principle is that air is forced out from radial orifices, and from there through the air gap to the outer surfaces. This design principle was also built into the demonstration prototype generator," says Kelly.

The potential to further boost output and efficiency from the demonstrator generator level to a commercialised large-scale product range is substantial, according to Kelly. The areas of optimisation include: coil design; coil placement; dimensioning of the disks and their internal spacing; magnet thickness; air gap; and minimising pole-switching cogging effects.

"The demonstration turbine model outputs were used for a theoretical exercise and a 7.0-metre concept rotor with three stator coil rings. Results indicated over 1MW output can be achieved with an overall axial length of 200mm, or about 1.4 metres for a 7MW turbine," he concludes.