The district municipality of Tumbler Ridge in north-eastern British Columbia, Canada, was founded, quite literally, on coal. In 1981 the provincial government started building a new town and associated infrastructure to service two new mines from which a consortium of Japanese steel mills had agreed to buy 100 million tonnes of coal over 15 years.

But the provincial government's investment in the area never achieved its objective of boosting the population of Tumbler Ridge to 10,000 people. The fall in global coal prices in the 1980s discouraged private investment, and when lower prices were forced on the mines, first one closed in 2000 then the second in 2003. The industry enjoyed a brief resurgence in the following years as coal prices rose again, and two new mines were opened. However, in 2014 they were both put into "care and maintenance mode", meaning they are allowed to restart without requiring a new permit, but are effectively shut down. For the forseeable future this fossil fuel looks set to stay in the ground.

But the energy industry is returning to Tumbler Ridge, this time in the shape of wind power. The 183.5MW Meikle project, 32 kilometres north of the town, is under construction and on schedule to start full operation in November. Owned and developed by Pattern Development, though slated to be sold to Pattern Energy on completion, it will be British Columbia's largest wind project, boosting the province's installed wind-power capacity by 38%.

At first glance the site does not look promising for a large wind project. Although only in the foothills of the Rockies, it is over 1,000 metres above sea level, and the terrain is varied and complex. The climate is fairly challenging too, with average temperatures in July below 15degC, falling to -11degC or less in January.

Two factors dictated the choice of site for the project, says Ward Marshall, Pattern's director of business development. "The Meikle wind project is located in one of the best wind resource areas in British Columbia that is constructable," he explains. "There are (sites with) better wind resources elsewhere, but their higher elevations and steeper terrain increase the cost of construction to the point that they make the project uneconomic.

"Also, Meikle is located within four kilometres of a BC Hydro 230kV transmission line," Marshall adds.

BC Hydro, the province's main electric utility, has signed a power purchase agreement (PPA) for Meikle's wind-generated electricity over 25 years.

In the normal course of events, work on a wind project in this part of the world would have started with a huge programme of tree removal, but that proved unnecessary, largely due to the depredations of the mountain pine beetle. These insects, about the size of a grain of rice, usually play a beneficial role in forest life, attacking old and weakened trees, which speeds up the growth of new trees. But a series of hotter and drier summers and milder weather in the winter has led to a huge increase in their numbers and their effect on hitherto healthy trees. It is now estimated that mountain pine beetles have destroyed 160,000 square kilometres of British Columbia's 550,000 square kilometres of forest. The dead and dying trees they leave in their wake constitute a significant fire hazard, and almost certainly played a part in the huge forest fire that ripped through Fort McMurray in the neighbouring province of Alberta in May.

Complete clearance has been the authorities' main method of dealing with the fire risk, with the result that "a significant proportion of the project site had already been clearcut prior to the development of the wind project", says Marshall. Site clearance work began in October 2014 and was completed by February 2015.

Preparation for Pattern and its general contractor, Canadian company Borea Construction, also had to take into account that this area is rich in dinosaur fossils. Work in one part of the site had to be temporarily halted following the discovery of a fossilised trackway made by a rare type of dinosaur (see below).

Working closely with turbine supplier GE, Pattern devised what Marshall describes as "a unique solution that allows the project to optimise the energy production of the site". On the southern ridge, the highest point of the site, where wind speeds are stronger, GE's 3.2MW turbine with a 103-metre rotor diameter will be deployed.

Further north, slightly sheltered by the ridge, where wind speeds are lower, there will be two rows of 2.75MW turbines with rotor diameters of 120 metres. When completed, there will be 35 3.2MW machines and 26 2.75MW turbines for a total installed capacity of 183.5MW. Foundation work is largely completed, with turbine delivery due to start in July, and commissioning beginning in September.

According to Pattern, C$400 million (US$312 million) was invested in the project. An average of 150 workers have been employed on site during construction, with up to 275 workers during peak activity. Once Meikle is up and running, however, it will only require nine permanent employees. GE will be responsible for servicing and maintaining the turbines. 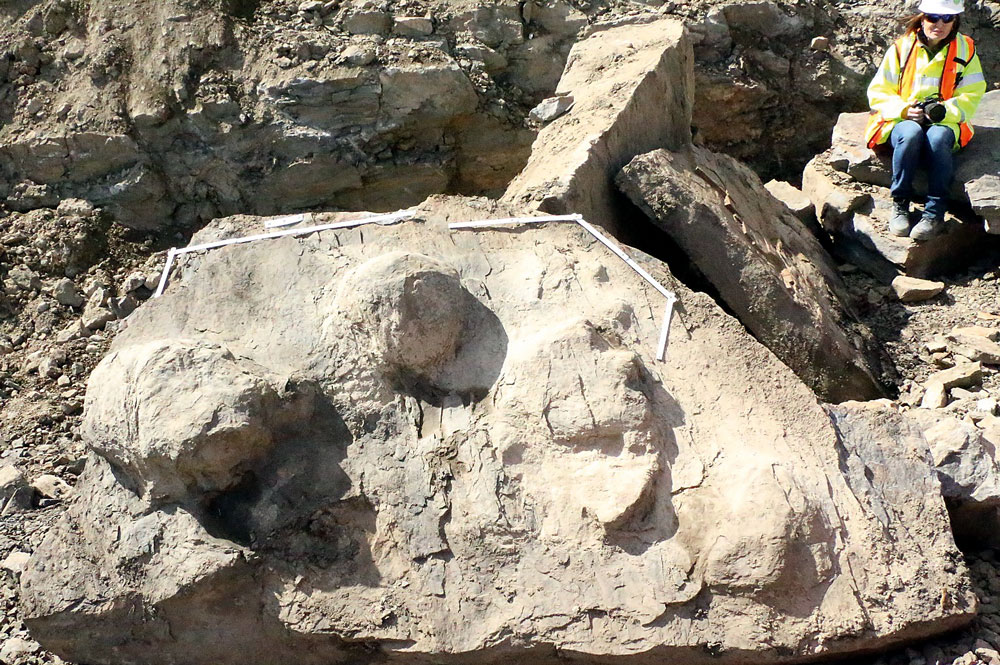 In July 2015 an excavator operator working at Pattern Energy's Meikle wind project site spotted a "bumpy slab". There was something sufficiently distinctive about the bumps for him to recognise that this could be an interesting find, and certainly worth reporting.

What he had discovered turned out to be natural casts of a trackway, made by a rare type of ankylosaur (an armoured dinosaur) nearly 100 million years ago. Four-toed ankylosaur tracks have been found in Canada before, but this was a much rarer three-toed example.

As British Columbia has no legislation to cover fossil protection, Pattern turned to protocols for archaeological discovery to deal with the find. An independent environmental monitor was contacted, who visited the site, and the area was barricaded to prevent further disturbance.

Scientists from the nearby Peace Region Palaentology Reseach Centre and the Tumbler Ridge museum, which opened in 2003 following the first dinosaur fossil finds in the region, were then invited to take a closer look.

Work at the site was stopped for only a few days, and the trackway has now been moved to the museum for further research and display. Pattern's sensitivity to its discovery has been acknowledged by Tumbler Ridge's mayor, Don McPherson. "I want to thank Pattern Development and Borea Construction for working so well with our local community and sharing this trackway with the world," he said.