16:50 - "My boss didn't give me a cheque to write when he told me to go out and meet our sustainability goal," said Mark Vanderhelm, vice-president of energy for Walmart. Corporate buyers of wind energy may be looking to meet environmental targets, but not at the expense of higher utility bills, he explained during the Corporate and Industrial Buyers session. "To all the developers out there, price is the only thing that matters," he said.

On the exhibition floor: demonstrations, entertainment and food 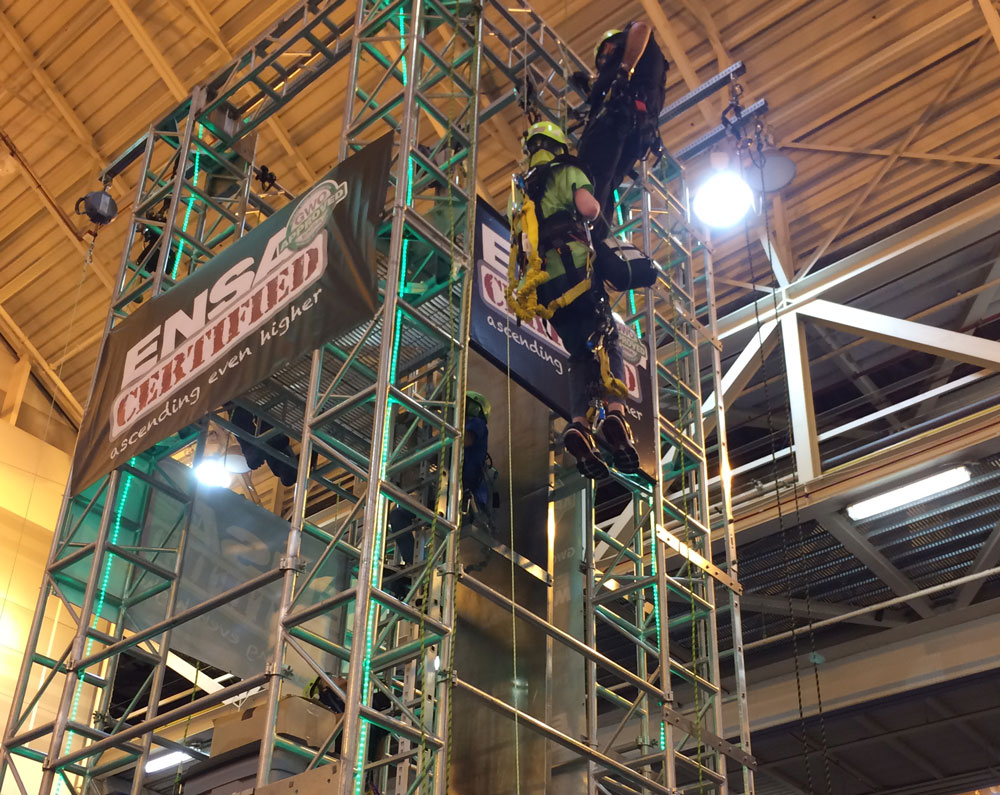 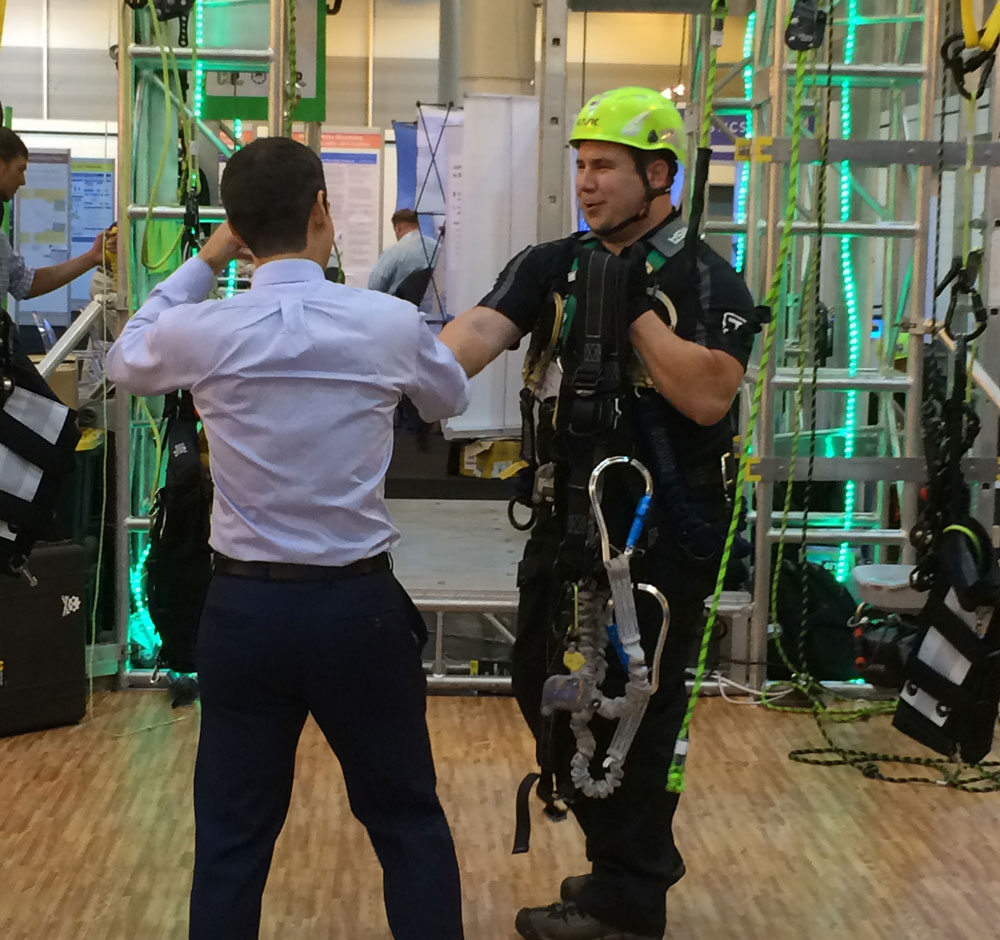 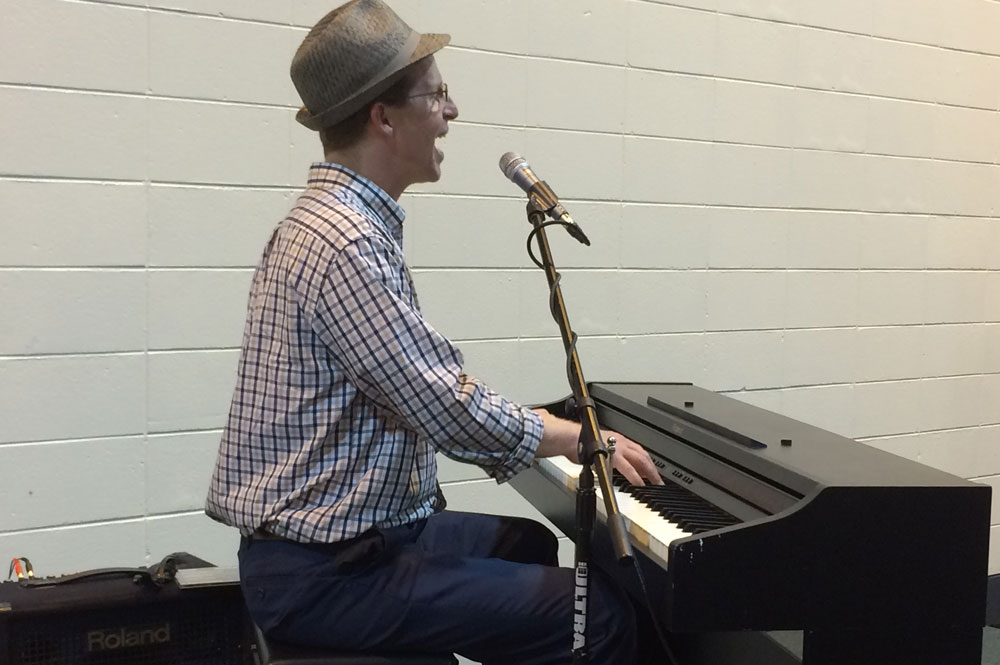 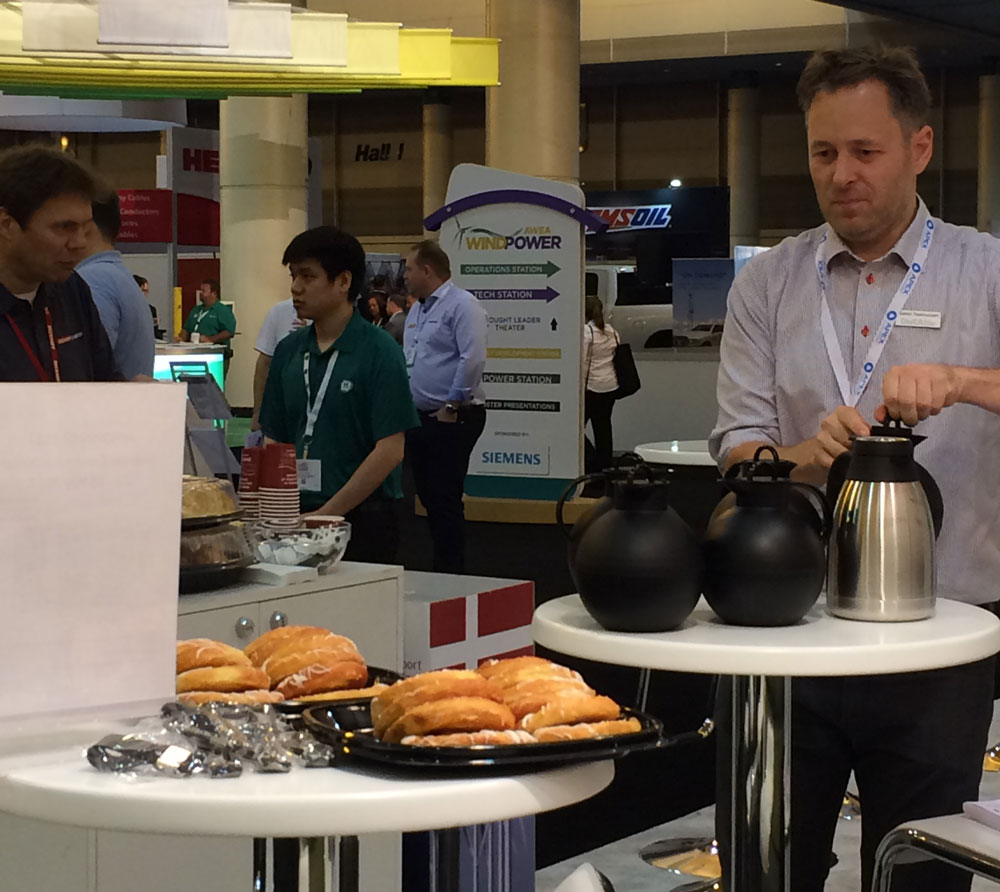 16:30 - The biggest challenge for the nascent offshore industry in the US is maintaining a supply chain, said Thomas Karst of MHI-Vestas Offshore Wind. "We know how to do the turbines" because of our European experience,"  he told attendees at a session on lessons learned from Europe’s offshore industry. Without US-based manufacturing of components, however, the "kit" has to be transported across the Atlantic — and that is costly.

Arnold Wilmink of E.On North America agreed and added that the US’s mature onshore industry is beneficial for the new offshore sector, especially because the onshore projects are often 100MW-plus. So, for example, transformers for onshore are basically the same as for offshore, he said.

The key to cutting project costs in the US is volume and, especially, continuity, Karst said. Progress that is on-and-off every other year is difficult for the supply chain. "We need five years for a project, and we need legislation that allows us that length of lead time," he said.

15:45 - Compliance with renewable portfolio standards (RPS) cost US consumers an average $12/MWh in 2014 - or a total of $2.6bn. That equates to 1.3% of retail electricity bills, said Ryan Wiser of the  Lawrence Berkeley National Laboratory during a session on RPSs, which have been adopted in 29 states and Washington DC.
However, the benefits of RPSs in terms of lower greenhouse emissions and pollution totalled a far higher $7.4 billion, almost three times as high as the costs. Benefits include reduced healthcare costs.

Wiser noted that most analysts predict RPSs to lead to 3GW of new wind a year from 2015 to 2030.  Wind so far represents 64% of the 57GW of renewable electricity in states with RPSs, he said.

In some states with aggressive RPSs — in the case of California, the requirement is 50% by 2030 — the RPS will still remain relevant even in an era of Obama’s Clean Power Plan. In these states, the CPP could be a "floor not a ceiling", said Wiser. He also noted that implementation of the CPP has been halted by a court, thus RPSs are currently a crucial state-level policy driver.

New York’s goal of 50% renewables by 2030 is ambitious, said Anne Reynolds of the Alliance for Clean Energy New York. "The pace of development will have to pick up if we are to get anywhere near this." The bulk of renewables in the state so far is hydro.

The state’s Clean Energy Standard Cost Study has projected that wind could contribute just under half of the new capacity needed to meet New York’s RPS.  Specifically, the study projects that new onshore wind could total 4.1GW and new offshore wind 1GW by 2030, Reynolds added.

Even so, costs of renewables have to come down and build has to be incentivised. Getting to 50% in New York will be a challenge, she said.  Renewables advocates have been telling the state decision-makers, "If you really want to get to 50%, you will have to provide PPAs [power purchase agreements]," she said.
But panellists agreed that wind and solar costs have down so much that 50% is realistically achievable in states with aggressive RPSs.

14:40 - The long-term phase out of the production tax credit is bringing more tax equity investors into the US market, leaving developers hopeful it will make what has always been their most expensive source of capital more affordable.

Tax equity investors are looking for an 8% return and Jim Murphy, CFO at Invenergy LLC, said while new entrants to the market are helping bring that down, it is not happening fast enough. "I’m a little frustrated tax equity has not come down more."

Storch is also seeing more flexibility among tax equity investors. "Now there is much more opportunity to break away from the mould in terms of tailoring the deals to better meet your needs," he said.

"With the entry of so many new players, finally we really have a competitive environment for tax equity."

US wind companies are diving back into new project development in order to position themselves to take advantage of the production tax credit before it expires, delegates at the finance session were told.

Development pipelines had "thinned out" by last year as companies cut back on making early-stage investments because they were worried the PTC would not be renewed, said Chadbourne and Parke LLP's Keith Martin. With a five-year phase out now in place, though, they have to ramp up to ensure they have enough projects to capture the incentive.

14:03 - Andrew Ace, global marketing manager of ITW WindGroup of Seoul, South Korea, is pleased with attendance at the exhibit. The firm makes sealants and grouting on onshore and offshore turbines. "It's definitely more crowded than I expected," he said.

He added: "People know our products. A lot of us being here is to continue to educate the market and to meet existing customers." 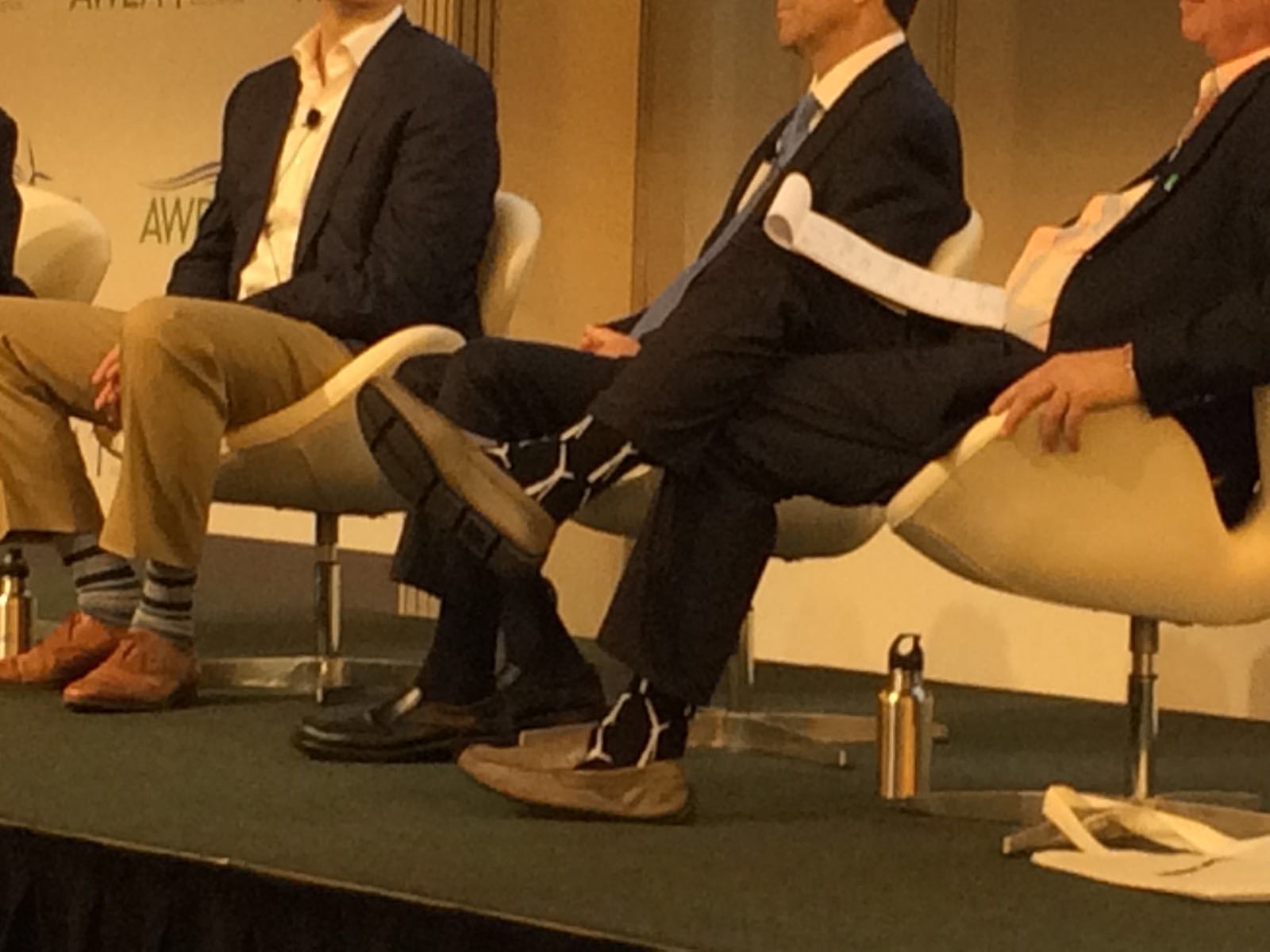 Here, he tells Windpower Monthly the challenge for the US wind sector is to become subsidy-free so that it can succeed after the production tax credit (PTC) is fully phased out.

"You have to chew gum and walk at the same time. We must act now as if we are a commodity industry. We can't wait until 2018," he said. "The road map is clear. We either innovate or we die."

13:23 - The face of America's wind farms changed radically 15 years ago as a new generation of multi-megawatt turbines from a smaller pool of manufacturers came online.

Keeping these machines in top condition is the main focus of the US's growing O&M sector.

13:01 - Louisiana is known more for its oil and natural gas industry as well as commercial fishing, chemicals and tourism than as a wind hub.

The state has no installed wind capacity, as yet, but it does have three wind-related manufacturing facilities. One of them, Gulf Island Fabrication, manufactured the five jacket foundations recently installed at the US's first offshore wind project, Block Island.

Some predict that the US will have installed 1GW offshore by 2020, but even that will be slower than the industry had hoped, a familiar story for offshore developers.

12:29 - AWEA's Political Action Committee (PAC) stall is running a poll ahead of the US presidential election in November.

The candidates are likely to be Hillary Clinton for the democratic party and tycoon Donald Trump for the republican party: 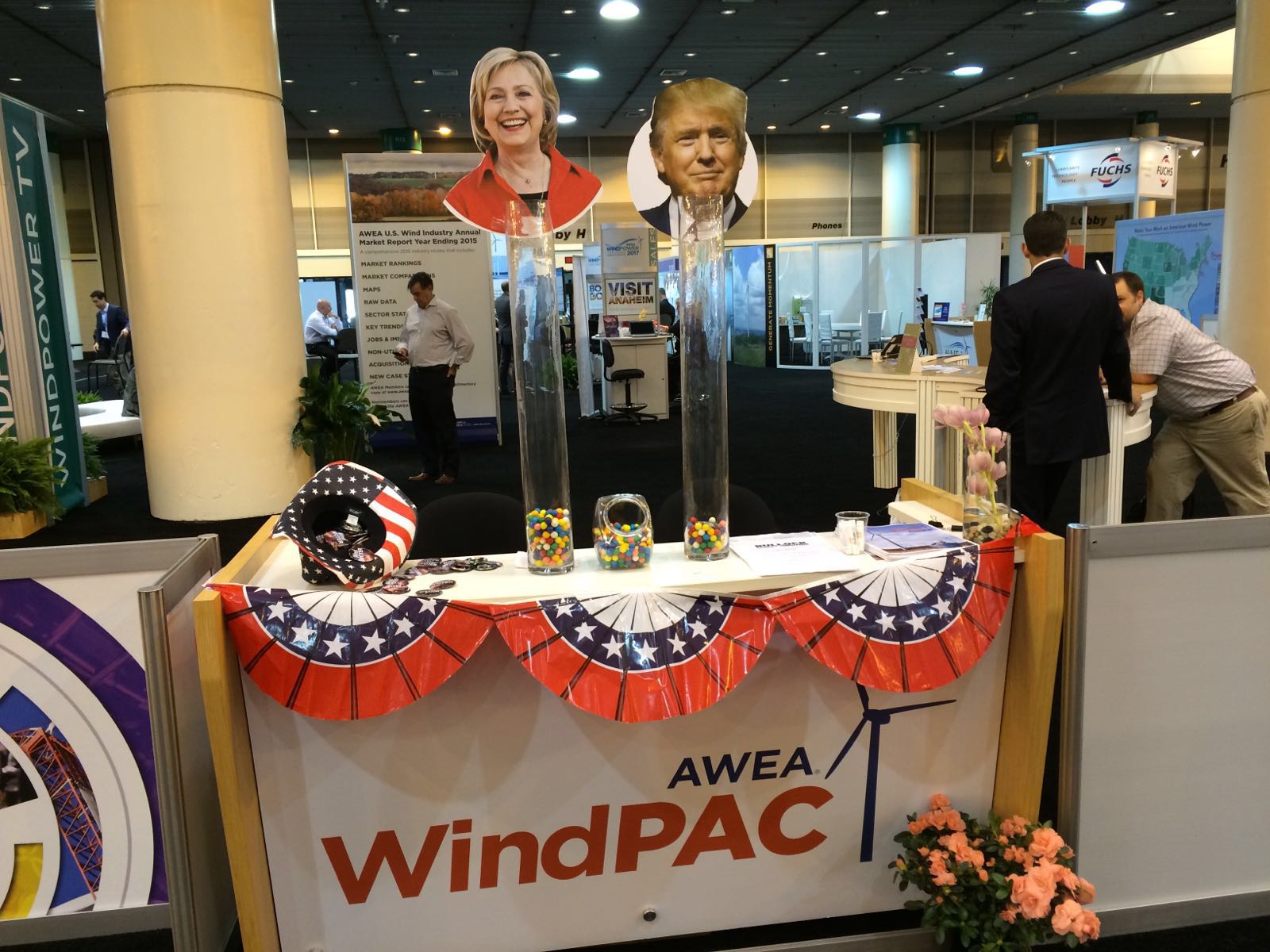 12:01 - Turbine manufacturer GE is once again demonstrating its Digital Wind Farm software at Windpower 2016. This year, the conglomerate has released a 'suite of apps' for customers to use. 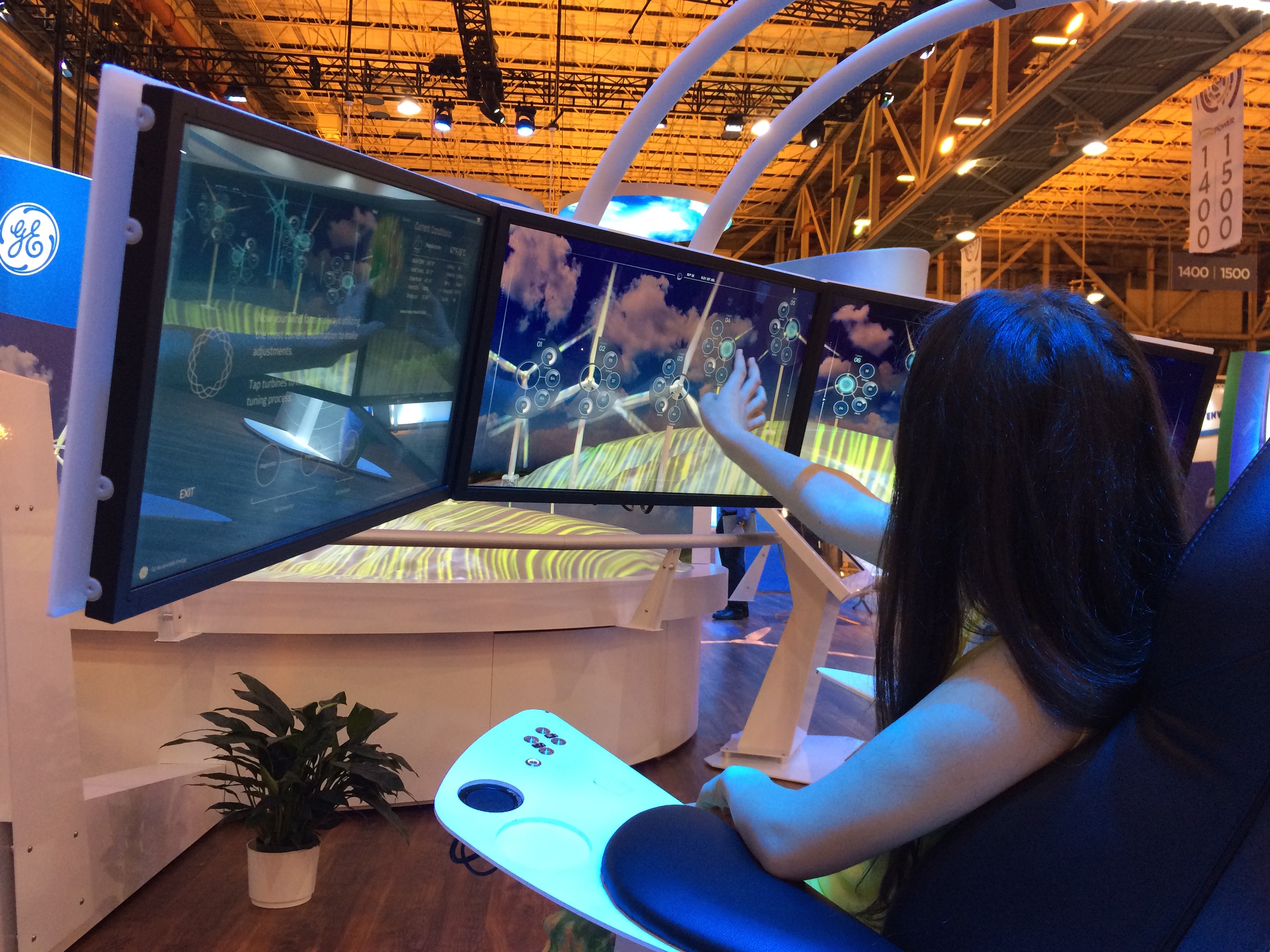 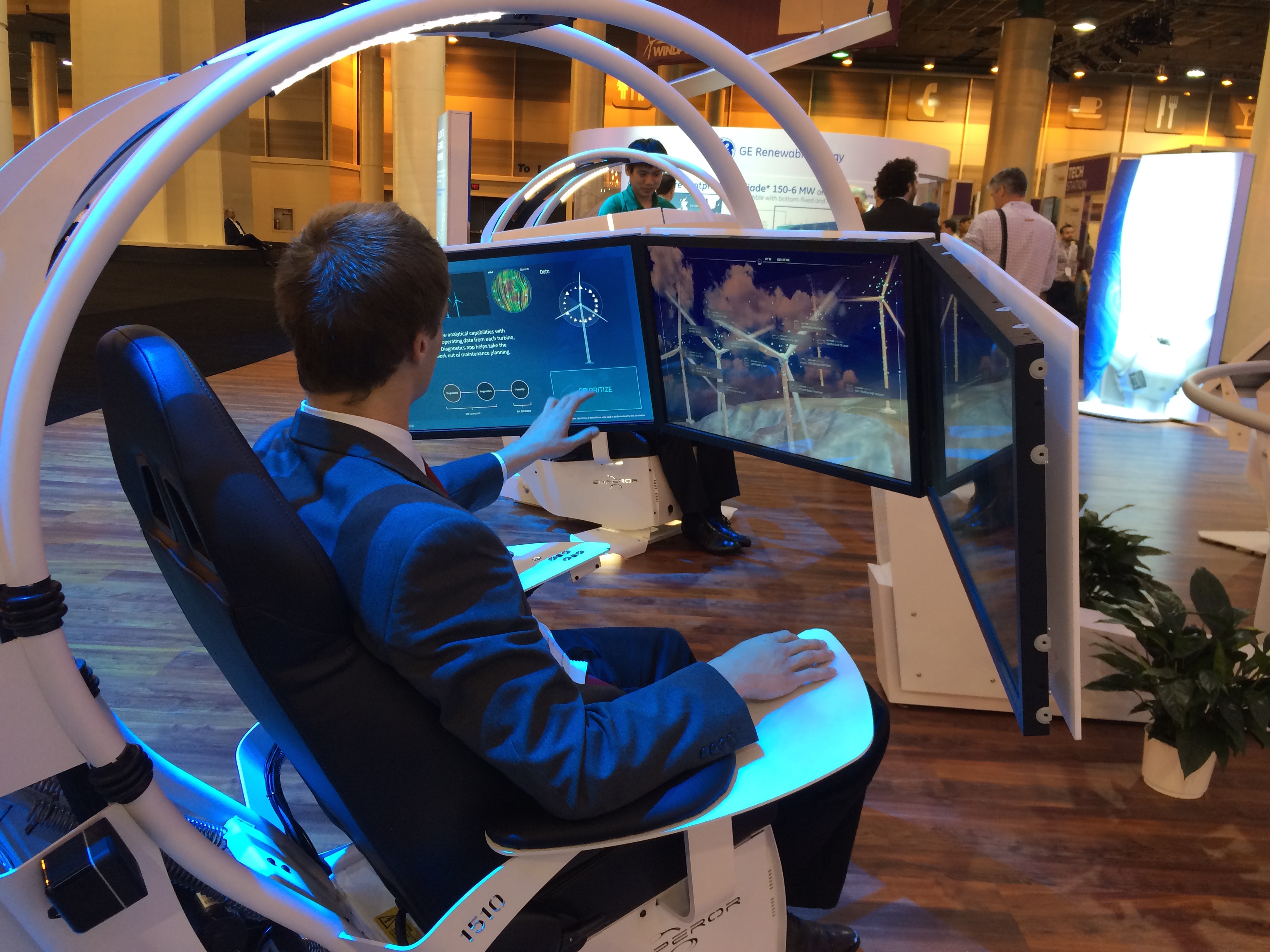 "If states are not interested in taking the [renewable] energy, they will not be interested in paying for transmission" to move wind power long distances to load centres, he said.

AWEA also presented awards to three individuals for their contribution to transmission.

Mike Skelly of Clean Line Energy thanked them, saying that without their grid planning efforts there would be far less wind development: "And we all know that transmission is the sexiest part of the electricity industry," he said. 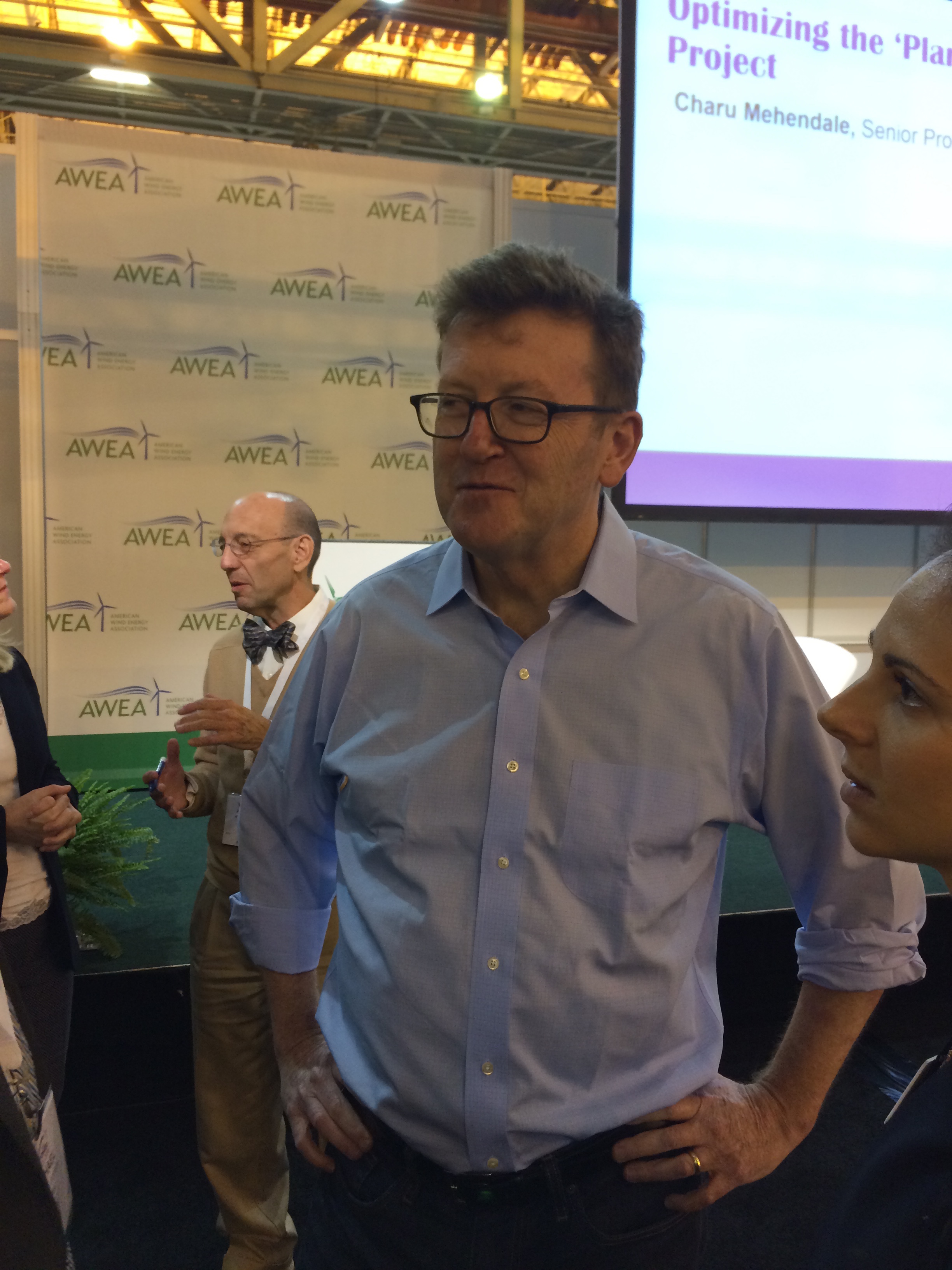 SPP covers Oklahoma, Kansas and a small part of Texas. He spoke at a session on challenges to transmission planning.

SPP has seen no issues because of wind's variability, he said. That is in part because it is geographically diverse within SPP's region, he explained.

11:13 - The US market will provide an unusual amount of certainty for the next four years, agreed senior turbine executives.

"We've got a runway, we've got some volume. We've got stability. It's what we asked for", says David Hardy, senior vice president at Vestas at the large turbine manufacturers forum.

Even so, the post-PTC era could still be marked by a slight 'valley of death' according to Ed Zaelke, of law firm Akin Gump and a former chair of AWEA's board of directors. "We're continuing to be addicted to our PTC drug," he says.

"[Such a market] can be challenging for an OEM," conceded Scott Baron of Nordex/Acciona Windpower. "We need stability and to manage our supply chain."

10:51 - The US wind sector needs to be both humble and paranoid as it navigates through the five-year PTC phase out and positions itself to compete without subsidies, says GE North America wind general manager Andy Holt.

"We need to be humble through the long PTC runway we have, and we need to be paranoid that solar is going to steal our lunch."

Some of the levelised cost of energy gains made by the wind industry in recent years is the result of low commodity prices, leaving it competitively vulnerable should they start rise.

"If steel prices go up significantly, that's going to have a lot more effect on wind than solar," says David Hardy, SVP at Vestas.

09:58 - Turbine makers active in the US expect a rush of orders at the end of this year as developers position themselves to take advantage of their last chance to get the fill-value PTC. "It will be a challenge," says Mike Revak of Siemens.

Developers need to start construction this year to get the $0.23/MWh PTC, and can do that by locking in turbine orders. Developers then have four to five years to bring project online under new guidance from the IRS. 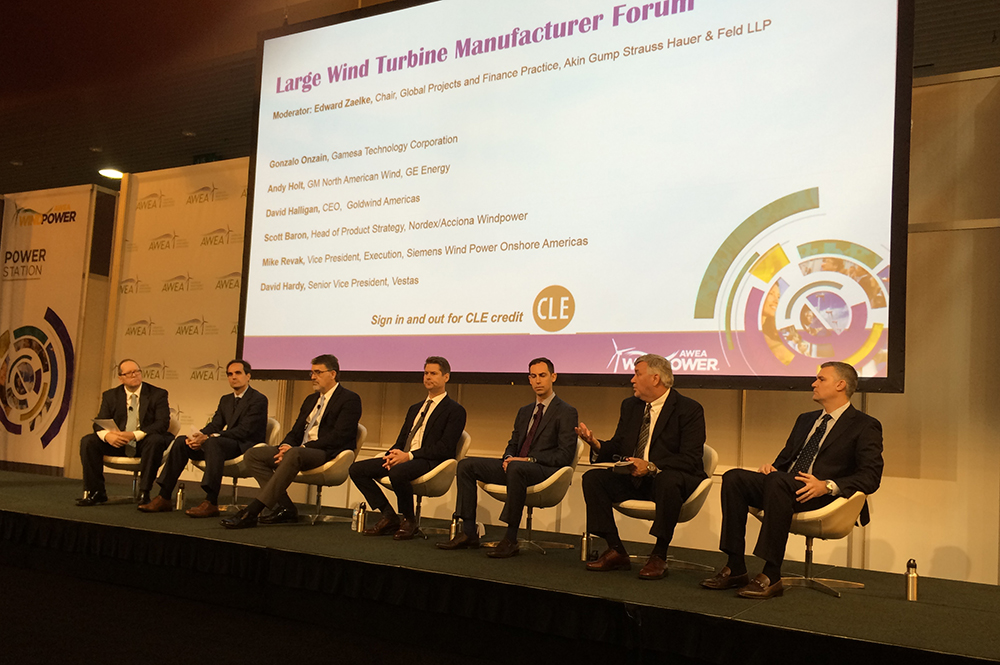 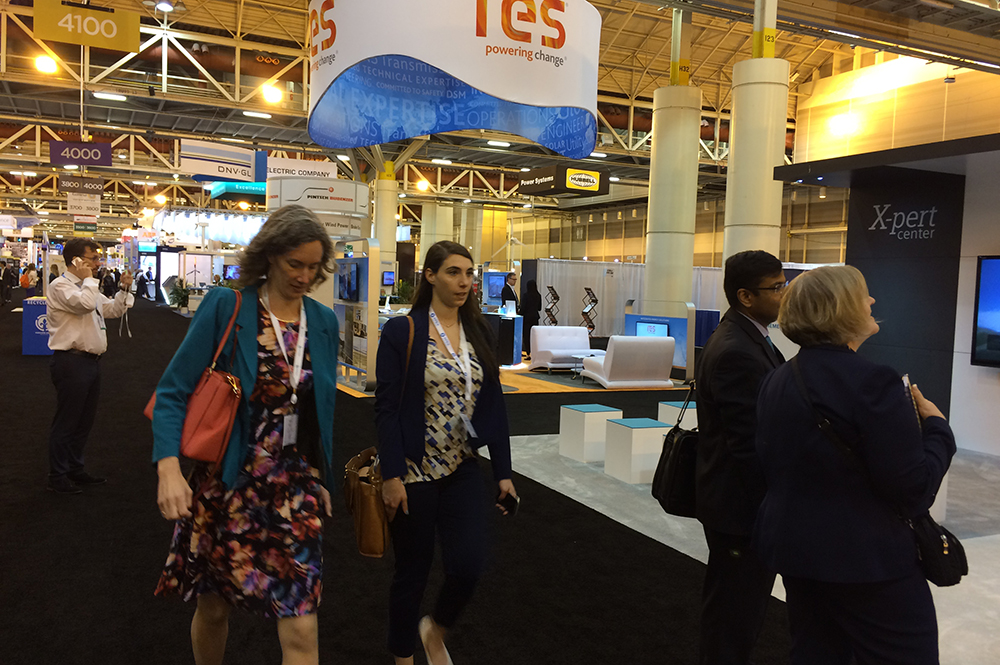 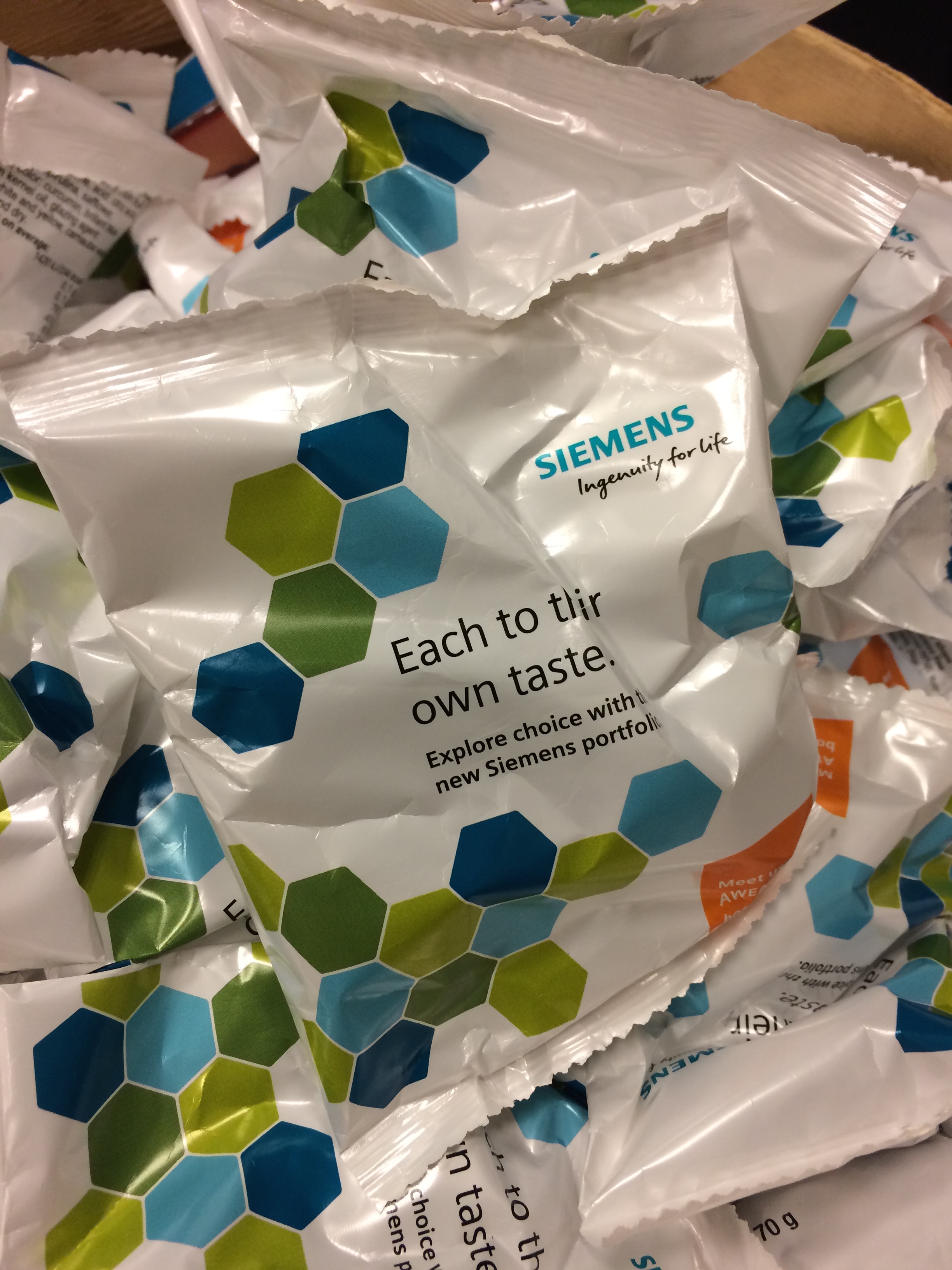 09:09 - The International Renewable Energy Agency (Irena) says more than 8.1 million people are employed by the global renewable energy sector — up 5% on last year.

For wind, there are 1.1 million jobs worldwide, which also grew 5% on last year, Irena said. Wind employment in the US alone rose by 21%.

Whirlpool has committed to investing $13.5 million in the turbines which will help power their plants from 2017.

07:28 - Wednesday, Day 2 of the conference, kicks off with a forum for large turbine manufacturers' session. Participants include: