By 2020, the US wind sector will have moved beyond the bubble created by the multi-year extension of the production tax credit (PTC). Wind power will probably account for 10% of US electricity production by then, up from 4.7% last year, according to analysts.

"We've got tremendous momentum, we're on track for doubling by 2020," says Tom Kiernan, CEO of the American Wind Energy Association (AWEA). "Our costs are continuing to come down. It's going to be an exciting five years."

Globally, the US generated more wind power than any other country in 2015 - 191TWh, with China second at 185TWh, despite its greater installed capacity.

The major driver for US wind over the next half decade will be the PTC. Congress voted last December to extend and phase out over five years the lapsed $23/MWh credit, as well as the alternative 30% investment tax credit (ITC), creating the longest uninterrupted stretch with federal incentives since the PTC first expired in 1998.

Now that the PTC has been extended, expectations for installations have increased, with both Bloomberg New Energy Finance (BNEF) and Make Consulting predicting 40-41GW of new wind by 2020, adding to the 74.4GW already installed at the end of 2015.

These predictions are in line with the 10% wind - 113GW cumulative capacity - by 2020 predicted as plausible by the US Department of Energy (DOE) in its Wind Vision report in 2015, which was published before the PTC was extended.

In a February update, the DOE's National Renewable Energy Laboratory (NREL) looked at the impact of the extended PTC and predicted just under 10% wind penetration by 2020 if gas prices remain low, and about 12% if they do not. Natural gas prices are far lower than in Europe, in part because of America's "shale gale". 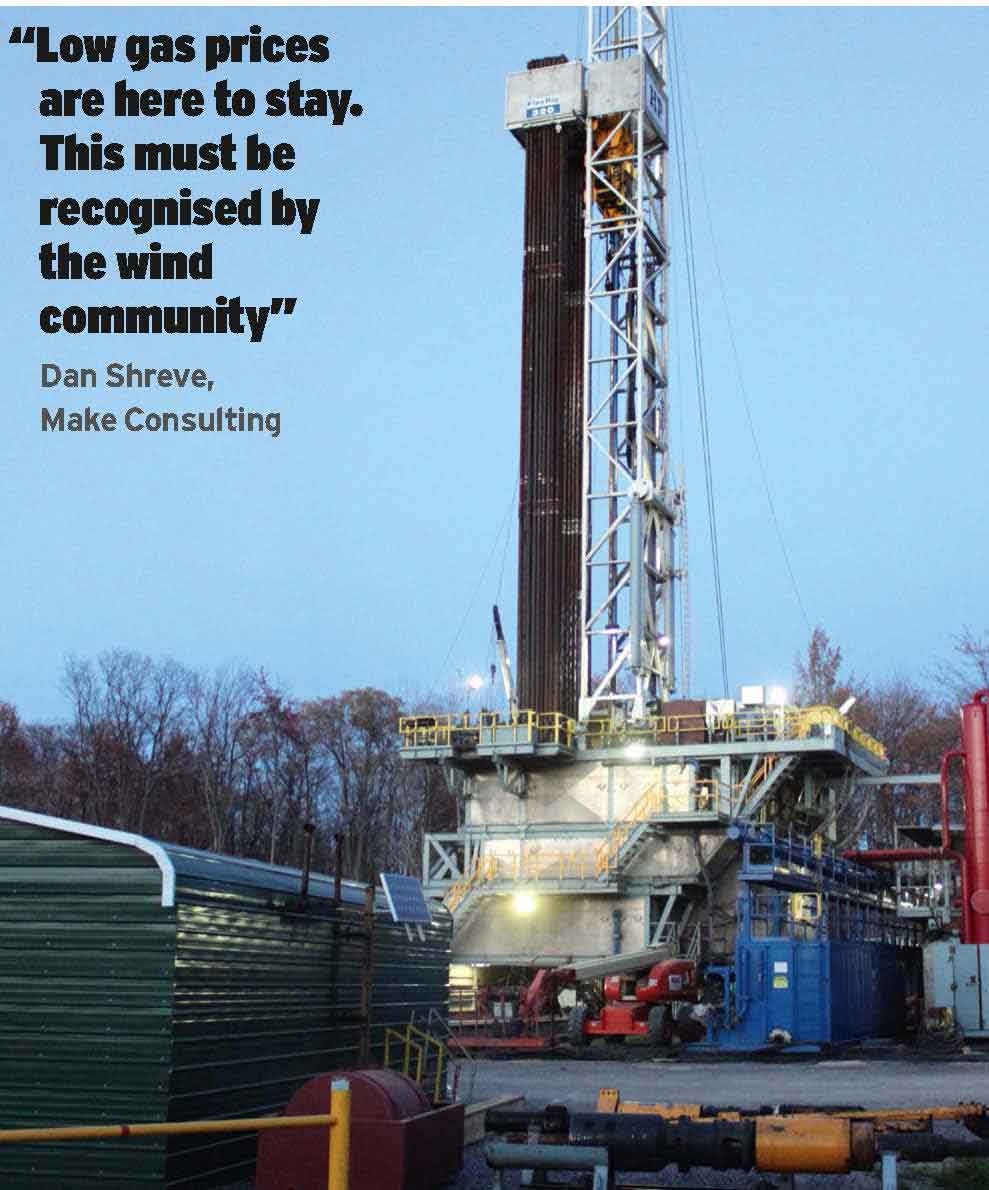 "Low gas prices are here to stay," says Make's Dan Shreve. "This must be recognised by the wind community." Gas will be at $2-3 per million British thermal units (MMBtu) through 2025, predicts Make, down from the $4-5/MMBtu it previously expected. Prices are currently just below $2/MMBtu. Amy Grace, head of wind analysis at BNEF, puts gas at about $3/MMBtu for 2017-22 and closer to $4/MMBtu after that.

Another driver for new wind, will be its continually lower levelised cost of electricity (LCOE). Make expects an aggregate reduction of 14% in the US baseline LCOE from 2016 to 2021.

The resulting LCOE in 2021 would not fully compensate for the loss of revenue from the reducing PTC at 40% of its current value in 2021, which represents 4% higher costs for wind power inclusive of the PTC subsidy compared with the subsidised LCOE in 2016.

However, Make also estimates that wind capacity with a PTC-subsidised LCOE of $39.9/MWh in 2021 will be the most competitive new power technology in many regions of the US, assuming an average natural gas price of at least $2/MMBtu.

The majority of new onshore US wind projects by 2020 will be added in the "wind belt", where growth has already been especially robust.

Wind-rich Texas, the Great Plains and the upper Midwest will see the most development. Some states in the region — notably Texas, Oklahoma and North Dakota — have ailing economies right now because their oil industry has been rocked by record low prices. This only emphasises wind's stable cost and economic impact.

Coal retirements will also be a driver. Make predicts a hefty 80GW in coal retirements from 2016 to 2025, a fair proportion of them in the same areas where wind will grow most dramatically. The US coal-powered fleet currently stands just below 300GW.

State-level renewable portfolio standards (RPSs), which set a minimum percentage of renewables generation, will be overshadowed by the PTC as a driver, with many states already meeting their targets.

Even so, aggressive standards will still influence the regional distribution of projects. California is mandating 50% of its electricity come from renewables by 2030; Oregon specifies 50% by 2040; and New York is in the process of requiring 50% by 2030.

President Barack Obama's Clean Power Plan (CPP) to regulate emissions from coal-fired power plants, if implemented as planned, will not formally start making a difference in the shift to less polluting power until the early 2020s. But its influence will be felt before that.

In fact, the CPP has been described as locking in a transformation already under way. An estimated 20 states are continuing to proceed as if the CPP's implementation was not on hold after the US Supreme Court in February temporarily blocked it while a federal appeals court considers a challenge from 29 states.

The major players in the US are unlikely to change much by 2020. The tier-one OEMs - Vestas, GE and Siemens - are expected to continue dominating the turbine supply market. Siemens may strengthen its third-place ranking if it merges with Gamesa, points out Shreve.

There will be more domestic content in projects because of a more robust local supply chain based on the next few years of market certainty. Wind-related jobs will continue to increase. The US Department of Labour predicts an 80% increase in the number of wind technicians by 2020.

Firms such as NextEra, MidAmerican, Invenergy, EDP Renewables and rising star Apex Clean Energy are likely to remain leading developers in the US.

Major asset owners in the next few years may buy more "distressed projects" with low-priced power purchase agreements (PPAs) and higher operation and maintenance costs, predicts Grace. The involvement of yieldcos in the US wind market will remain less prominent in the short term, but may pick up somewhat by 2020, she says.

Buyers of wind power are expected to continue to include more corporates, or non-utility companies, a trend that took off in 2015. Non-utility purchasers accounted for 75% of the total megawatts contracted in PPAs signed in the fourth quarter of 2015. With the PTC extension, corporates "now have time to become (more) educated about synthetic hedge deals", says Shreve.

For the next two to three years, most of the turbine manufacturers will be in "full execution mode" to deliver turbines prior to the PTC phase-out, slowing down new product research and development, predicts Aaron Barr, senior technology adviser at Make.

"Most OEMs have already introduced their leading products for the PTC build cycle," he says. After 2018, that will change as cost and performance will need to be optimised to compensate for the reducing PTC.

By 2020, the trend will be towards taller towers and longer blades, plus project-wide controls and more short-term storage. The average megawatt rating of new onshore installations in the Americas will have increased from 2.05MW in 2015 to an estimated 2.43MW in 2020, according to Make, and the average rotor diameter will have increased from 102 metres to 115 metres.

By 2020, the improved technology should allow projects to be increasingly installed in lower-wind areas, says Daniel Laird, director of the National Wind Technology Centre. Transportation constraints will be significant, with segmented blades and towers and on-site manufacturing more and more appealing. Even on-site 3D printing is a possibility, but not by 2020, he expects.

Segmented blade technology remains in its infancy, and commercial deployment should be measured in years rather than months, cautions Make's Shreve. Heavy-haul trucking companies are making do with lowto moderate-risk modifications of their existing trailer fleets, although they may make additional investments in newer equipment by 2020, he adds.

The US wind sector will face other challenges, of course. Electricity demand has been sluggish and is expected to remain so, says BNEF's Grace.

Utility-scale solar will have increasingly solid market penetration by the end of the decade as its LCOE continues to drop, and it will be competing hard with wind in sunnier regions, such as California and Texas. Solar development is primarily buoyed by the ITC, which has been extended for longer than the PTC.

By about 2030, BNEF expects solar's LCOE to be lower on average in the US than wind's. But AWEA's Kiernan points out that BNEF's projection is about 15 years away. "You've got to take it with a grain of salt," he says.

Transmission is always a constraining factor, but not enough to slow down the PTC bubble, according to Make. Even in areas where transmission constraints might lead to a few years of curtailments, wind developers are likely to still proceed to take advantage of the tax credit.

Michael Goggin, AWEA's senior director of research, concedes that much more transmission is needed by 2020, especially in the territories of the Midcontinent Independent System Operator and Southwest Power Pool, two regional transmission organisations that straddle the wind belt.

One project that will help is Clean Line's $2.5 billion Plains & Eastern Clean Line HVDC project, approved in March. It will transport 4GW of wind energy from the Oklahoma Panhandle region to Arkansas, Tennessee and other parts of the south. Construction could start in 2017 (see table, below).

Goggin also describes transmission as a "major constraining factor" for wind developers in areas of low-cost and high-quality wind, such as Wyoming, from where two major lines are planned to ship the power to California, but not much before 2020.

Beyond 2020, wind's future in the US is bound to be less certain. Make's high scenario for 2025, which includes the CPP, envisages around 160GW of installed wind capacity; its low scenario points to around 140MW. "The CPP is very important for wind," agrees AWEA's Kiernan.