Eize de Vries talked exclusively to Vestas engineers about the potential of the concept turbine.

It is set to become a blueprint for larger-scale future products for specific markets, and the company plans to test core scaling rules, risks and opportunities, and transport and installation challenges in new markets.

The aim was to generate as many ideas as possible with few constraints, followed by a concentrated focus on those options that offered the best opportunities for further development. 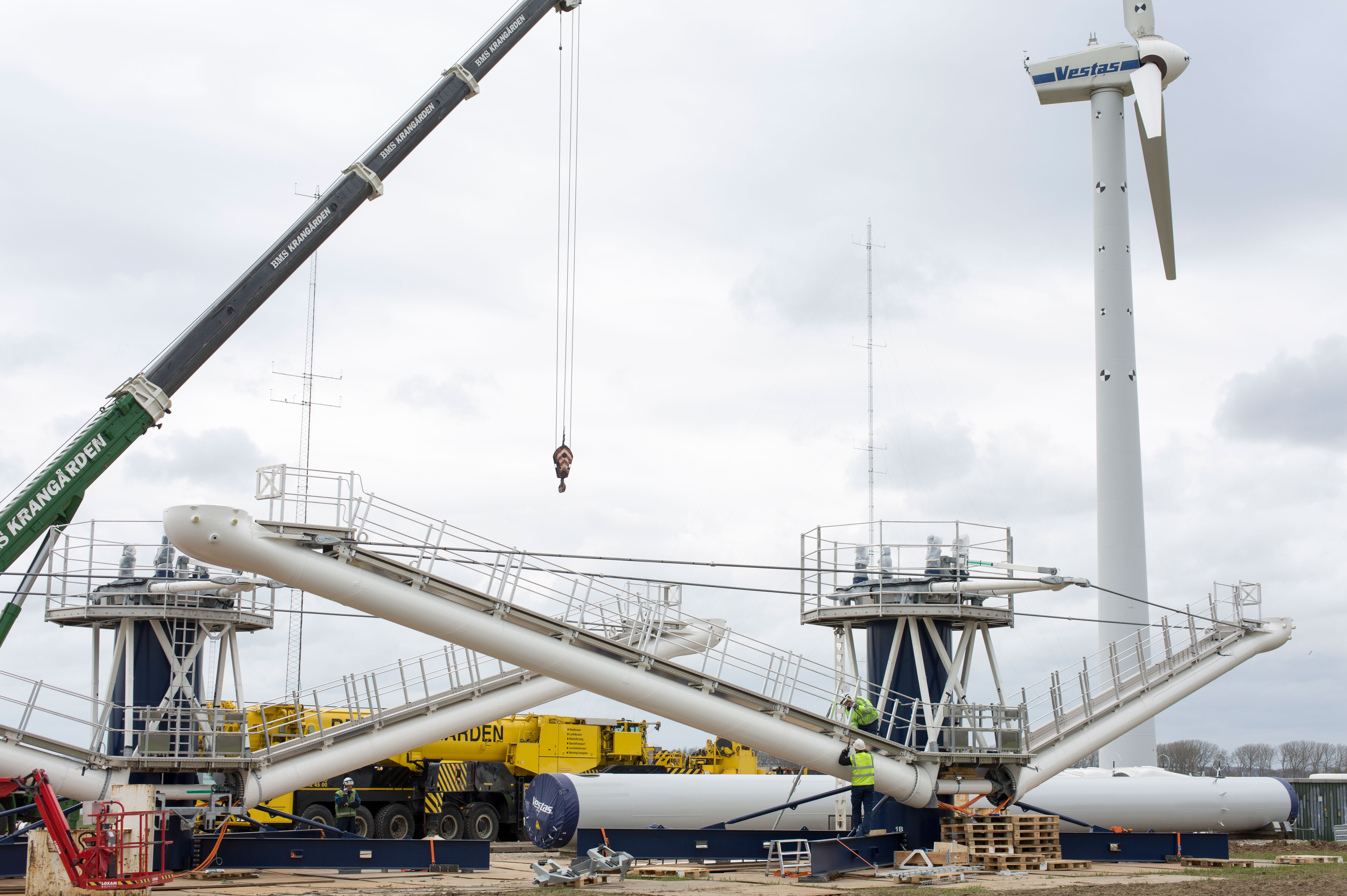 The concept turbine incorporates four refurbished pitch-controlled V29-225kW turbines with unchanged 29-metre rotor diameter, one of the thousands built from the first half of the 1990s.

The multi-rotor concept also features two vertical operational levels with a cylindrical tower element in between and 30.5-metre height interspacing between the levels. Two chassis units, each incorporating a yaw bearing, an active yaw system, and a left and right rotor arm assembly, are integrated within the tower structure.

The first twin-rotor unit is mounted atop two conical bottom sections at a height of 29 metres and the second at 59.5 metres, and the tip height thus adds up to 74 metres.

In the horizontal plane the nacelles are arranged in pairs on each level with close 1.5-metre tip clearance, and mounted separately on left and right side tubular-steel arms. These arms in turn are flexibly attached to a turnable central chassis.

During a visit to the prototype production site in Nakskov, Kristoffer Qvist Nielsen, vice president of concept development, pointed out the many special design features, such as the manner in which the nacelles are mounted on to the individual arms, and how they attach to the central chassis. 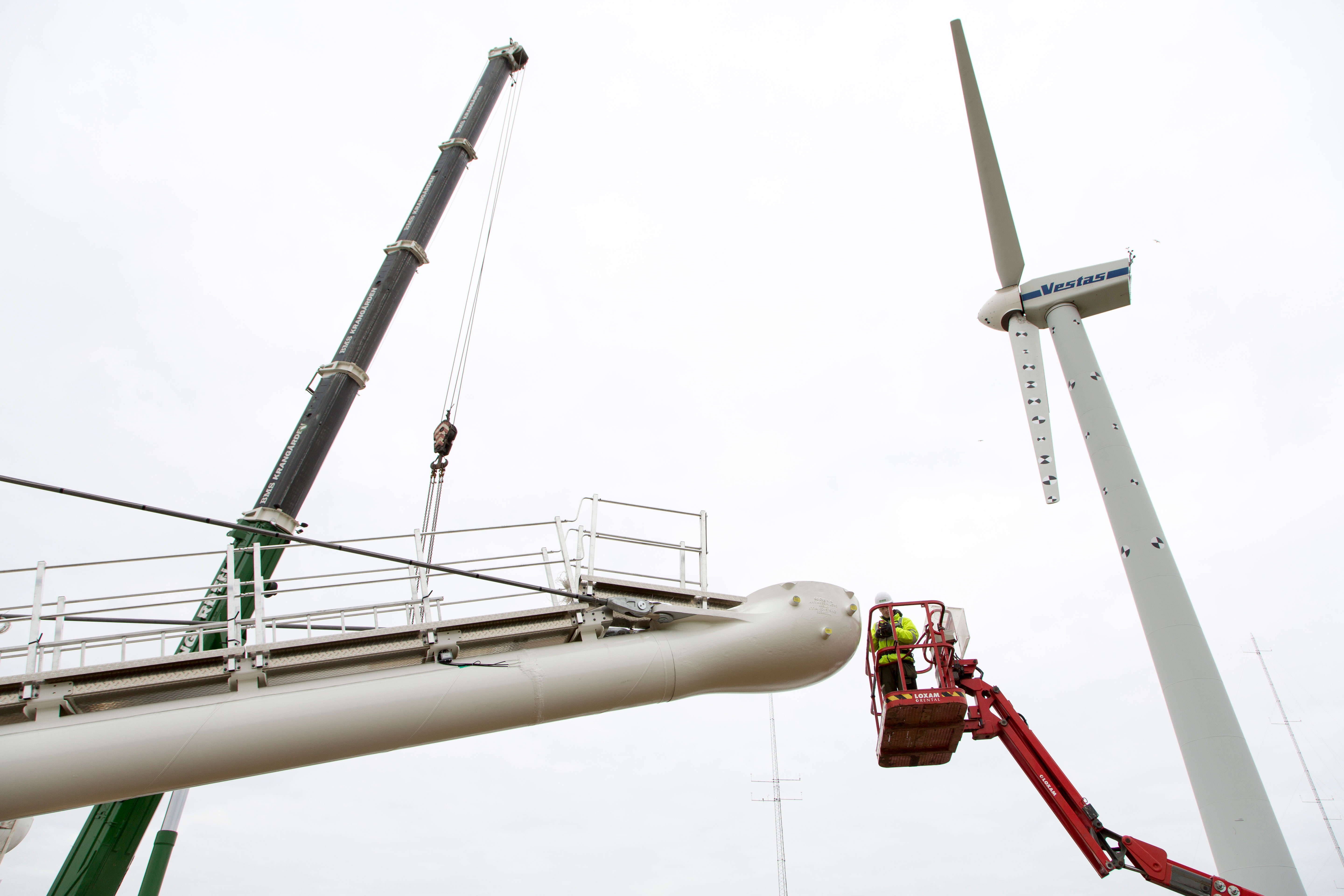 An arm of the concept model in Denmark, showing the connection for one of the 225kW turbines

"One of the main benefits of a flexible mounting solution is that it can reduce mass and loads. These options are possible today through advanced modelling tools, more real-time and deterministic control strategies, and design tools."

New for the V29s used is a switch from what was a two-speed operating mode with pole-switchable generator to variable speed. Vestas retained the induction generator principle but added a full-power converter and state-of-the-art turbine control system to each individual turbine.

The concept is being tested from three perspectives — aerodynamics, structure and load.

"Competition is getting stronger by the day, and wind power increasingly has to compete with other renewable energy sources as well," said Vedel.

"We want to be in the lead with regard to technology innovation, which requires new thinking and fresh approaches. Equally important, working with new concepts continuously feeds us with essential new knowledge that can help bring down the levelised cost of energy of future products as well as in addressing specific customers’ challenges."

Vestas currently serves 75 wind markets globally, and more countries and wind markets will follow in future, he said. This includes markets with less developed roads and port infrastructure. Some might face additional challenges, including a lack of suitable heavy trucks and installation cranes for the current 2MW and 3.45MW volume product range.

Vedel: "We have decided on a fast-track strategy aimed at testing its functionality and to concentrate on the key challenges, particularly turbine dynamics and control.

"Our concept development team has modelled these complex dynamics, and now we will test and validate these models and our control strategies on a larger scale with the concept turbine."

One of the main aims is to find ways to circumvent the negative consequences linked to the infamous square-cube law.

This scaling law dictates that as installations grow bigger, power output scales with the rotor diameter squared (P ~ D2), but mass increases with the diameter cubed (m ~ D3). Turbines thus become heavier if size increases, and without counter measures to lessen these effects.

In the control system, one of the main challenges of the concept is to find out if it can respond quickly enough to ensure safe operation even under extreme conditions and during single rotor failure.
For the modelling part, Vestas teamed up with the Danish Technical University (DTU).

Another main challenge, according to Vedel, is to design and control the multi-rotor system to minimise the overall structural costs. "Additionally, scaling down brings benefits in size and weight, which simplifies the overall handling and transportation requirements. This is, of course, very important in markets with a less developed physical infrastructure."

Multi-rotor turbine concepts have inspired engineer-inventors and others at least since the early decades of the 20th century. Even from the turn of this century until today, various designs from around 6MW to 20MW, in various rotor numbers and multiple rotor configurations continue to be presented, most for offshore. Unfortunately, almost all of these projects only ever reached a feasibility study stage.

Several did not even get that far. The list includes perhaps the world’s most famous multi-rotor design of German engineer-inventor Hermann Honnef (1931), comprising a 250-metre high tower with three 160-metre rotors.

The largest multi-rotor turbine actually built is a Dutch 300kW design called Quadro. It began with six variable-speed Lagerwey two-bladed 75kW turbines with 15-metre rotor diameter each, passive pitch control and flexible blade mountings. This 450kW installation became operational in 1988 near the port of Rotterdam, Netherland, but soon after, for technical reasons, the bottom rotors had to be removed.

It then operated for many years with excellent performance. This installation, like the Vestas multi-rotor turbine, incorporated two turbine levels, but the individual rotors attached to tubular steel arms were each rigidly welded to a conical steel tower. The Quadro central yaw system was located at ground level.

The importance of the Vestas multi-rotor initiative lies in the fact that it comes from one of the world’s largest wind turbine suppliers with matching in-house combined technological and financial strength and capabilities.

"This is a concept development project and, as such, it still has many technical, financial and economic challenges to address," concluded Vedel. "But we would not do it if LCOE and other benefits did not exist.

"The way to view this is similar to automotive concept cars: we see new things, some materialise sooner than others, and others do not materialise at all. As a technology leader we must be prepared to stand up and also take a lead in shaping the wind industry agenda for tomorrow."