In Europe alone, there was a greater number of turbine deals by MW agreed during February— 1,926MW — than the global total agreed during January (1,481MW).

Of the 2,434MW of deals in February, only 20% were agreed outside of Europe, according to data from Windpower Intelligence, the research and data division of Windpower Monthly. 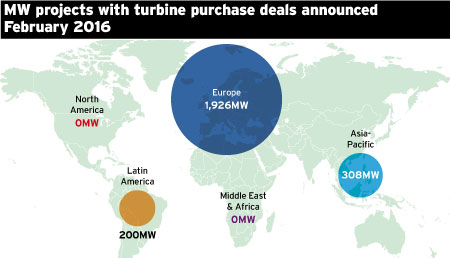 The largest turbine deal agreed during the month was at the revived 1GW Fosen complex in Norway.

State-owned utility and project developer Statkraft reversed its decision not to build the 1GW complex, nine months after deeming it to no longer be economically viable.

Statkraft has contracted Vestas to supply turbines to all six projects in the complex. Delivery of 278 Vestas V117 and V112 3.6MW turbines begins in 2018.

In Asia-Pacific, 308MW of deals were agreed, down from 526MW in January. It is also the lowest amount agreed, by capacity, since June 2015. The region had experienced a strong end to 2015, and Goldwind, China's leading turbine manufacturer, became largest OEM globally in 2015.

With its 1GW Norway deal, Vestas topped the list of turbine manufacturers in February. Siemens' 497MW deal was from its single offshore order at Hohe See.

Gamesa delivered a strong month thanks to a 199.5MW deal in Mexico and a 184MW deal in India – the first deal in the subcontinent for its G114 2MW turbine. 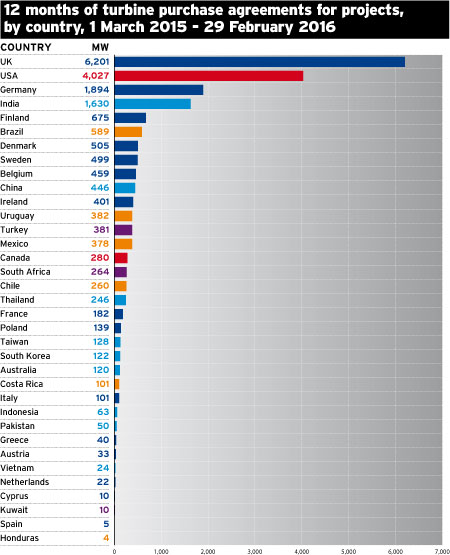 The quiet month in Latin America has caused Brazil to drop down the table for turbine purchase deals in the past 12 months.

However, with a power auction expected in Brazil at the end of March, there could be more deals in the offing.

Canada has also experienced a sharp fall in turbine deals, but it has a new federal government in place, which has pledged to back renewables generation.

That being said, Canada's financial support frameworks have recently been decided on a provincial basis, so pressure from the federal government may not be heeded.