In its 2016 Roadmap for a renewable energy future, Irena (International Renewable Energy Agency) said the cost of doubling renewable energy from 18% in 2014 to 36% in 2030 would save up 15 times more than it would cost.

In its analysis, Irena said "cost of doubling the renewable energy share by 2030 would be $290 billion a year... this is at least four and up to 15 times less than the external costs avoided.

"In other words, the reduction of CO2 emissions and air pollution damage on human health and agricultural crops can produce annual net savings between $1.2 trillion and $4.2 trillion."

If the doubling is achieved, it would stop 12 gigatonnes of additional CO2 emissions a year in 2030, compared to "business as usual", the report said.

Wind power also has great growth potential, with Irena predicting it could quadruple from 400GW in 2015 to 1.8TW by 2030.

"The enormous opportunities and multiple benefits of renewable energy become clearer every day. The benefits of renewables outweigh the costs 15 times over, are superior at job generation, are pivotal in overcoming poverty and play a key role in combating climate change," said United Nations Framework Convention on Climate Change executive secretary Christiana Figueres.

As part of its World Energy Outlook report to be published in June, the IEA said emissions of carbon dioxide stood at 31.1 billion tonnes in 2015, a similar level to 2013 and 2014. 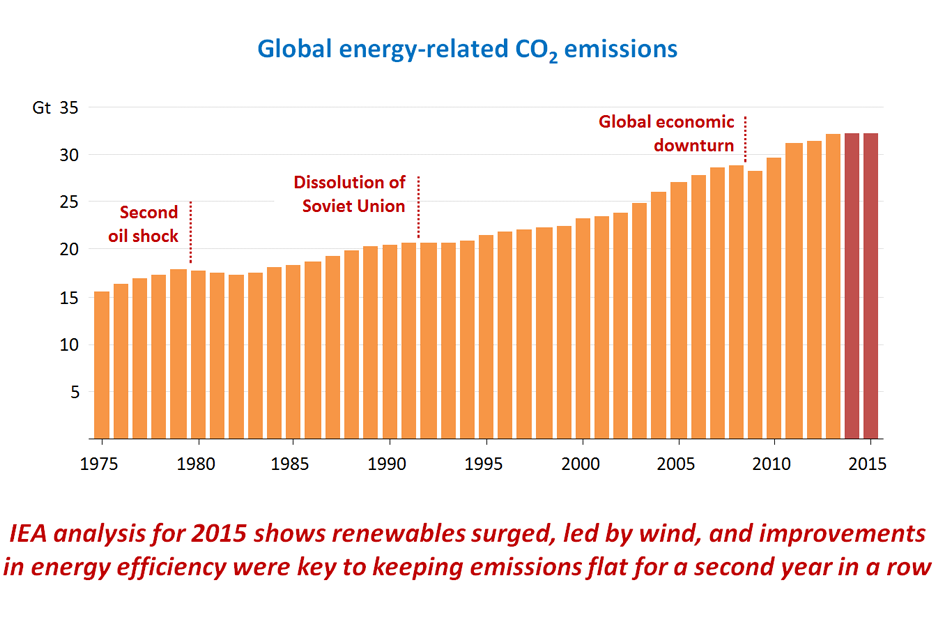