US shows how to make wind work

It would be hard to find two countries with such differing degrees of optimism about the future of onshore wind than the United Kingdom and the United States.

In Britain — more specifically, England — at least one developer is cutting its losses and getting out of the market as the government abruptly pulls the plug on support schemes and makes planning permission ever tougher to achieve.

In the US they are celebrating a five-year extension to the production tax credit (with an incremental phase-out) that has at last given this notoriously stop-start market the certainty it has long craved.

Wind power in the States has more than tripled in installed capacity and it costs only one third of what it did when Barack Obama took office in 2009. There is more than 70GW in operation now, expected to rise to well over 100GW by the end of the decade.

In 2015, wind power added more new electricity-generating capacity than any other energy source, leading the country with 47% ahead of gas (35%) and solar (14%).

And, according to the Department of Labor, the fastest-growing profession in the US is wind turbine technician, numbers of which are forecast to more than double in the next ten years.

"Look, if anybody still wants to dispute the science around climate change, have at it. You'll be pretty lonely because you'll be debating our military, most of America's business leaders, the majority of the American people, almost the entire scientific community and 200 nations who agree it's a problem"

Barack Obama during his final State of the Union address

Doing the sums in toasties and trees

The wind industry uses a number of ways to express electricity generation beyond the stark figures. The standard one is probably the number of households that can be supplied over a given period of time. 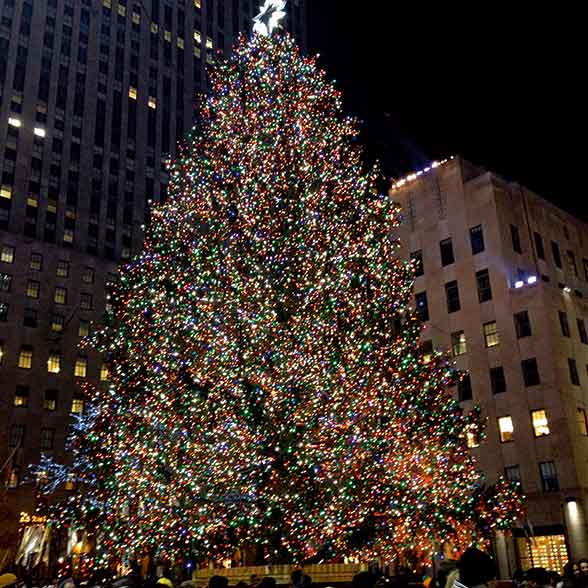 But occasionally someone — probably with too much time on their hands — comes up with a new measure. A couple of years back, Australia's Clean Energy Council equated a record-breaking month of wind power with the capacity to make six billion toasted sandwiches, for example.

Regrettably, toastie-economics failed to catch on, but the American Wind Energy Association (AWEA) has taken up the baton for the supply of impressive-sounding but ultimately unhelpful statistics.

A Christmas tree - a Norwegian spruce, up to 30 metres in height, since you ask - is installed every year at New York's Rockefeller Center, illuminated by 45,000 multicoloured LEDs. Apparently, the US has enough wind power installed to keep it lit for 440,000 years.

108% Expected growth of turbine technician jobs in next ten years in the US. Second-fastest growing profession, at 43% is occupational therapist