Wind averaged at €46.14/MWh across the year. The next cheapest electricity came from large hydro, at €50.69/MWh, followed by coal, gas and nuclear, with a combined average of €50.94/MWh.

While AEE's figures do not include the subsidies paid to wind, which are later added to the consumer electricity bill, the association points out that 8.5GW or 37% of the country's entire 23GW installed wind capacity operates with no subsidies at all, following energy reforms in 2014.

This unsubsidised wind power, behind 7.6% of mainland generation last year, "is therefore without doubt the cheapest electricity in the country," said AEE.

Overall, wind power met 19% of demand in 2015. If that generation had been covered by conventional power, without a contribution from wind, AEE calculates the cumulative wholesale electricity price would have cost 23.8% more over 2015; an additional €2.95 billion. 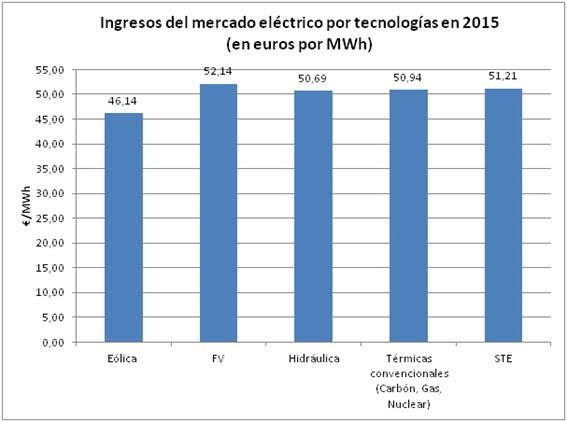 AEE shows how the average price of wind in 2015 was cheaper than solar, hydro and conventional power